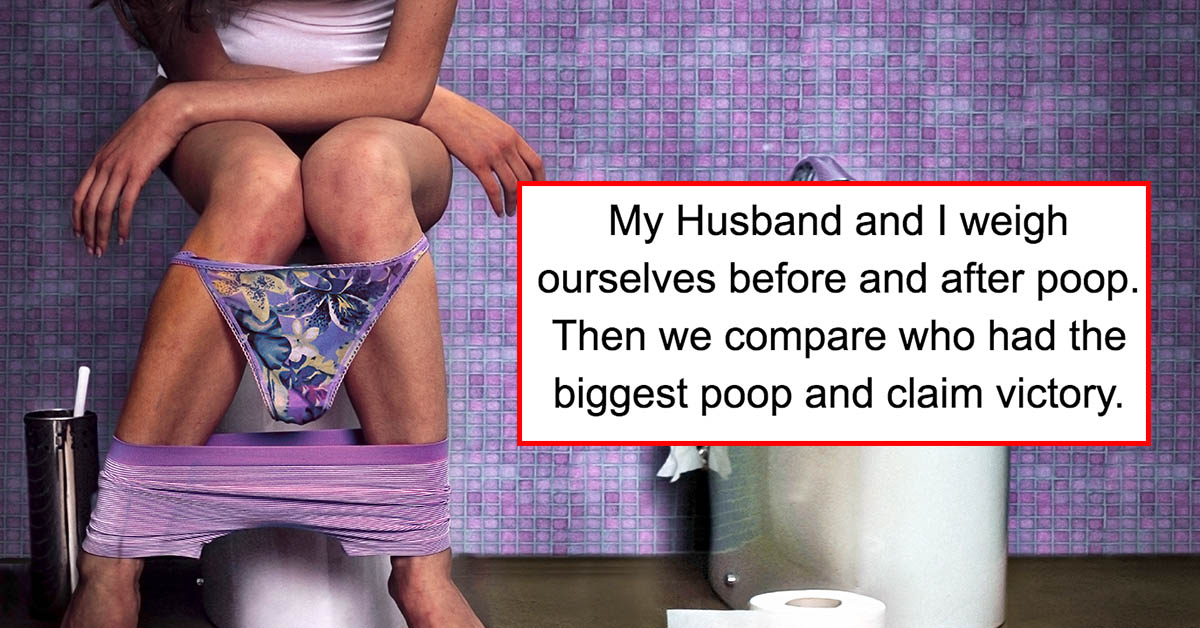 Don’t believe us? Recently, BuzzFeed asked their users to share the “gross things they do with their significant others,” and shit got really, really weird.

I express the blackheads he gets behind his ears and pop the zits on his back. He has tattoos and i feel like I get bonus points if find a back pimple hidden in a tattoo. We actively argue who has the right to pop the juicy ones. —rachelsporyh

We pretend like we’re going in for a really soft and romantic kiss. Then we just wrap our lips round the other persons nose and blow as hard as possible. Makes a brilliant sound, like a foghorn. —sarahscarisbrickl

We play this game called the “foot game” where we try to get our foot on each other’s faces. It often results in wrestling or being scared that when you least expect it, you will get a foot on your face. —corkeyduh

My husband poops every morning and usually after dinner, like clockwork, and he often calls me in the bathroom to chat. Half of me enjoys the chat, the other half is disgusted by the smells, sights and sounds of the man I have sex with pooping a few feet from me. —mamameows

My husband will lick my face because he thinks its funny when I break out in pimples so I lick him back and we get into these wrestling licking contest trying to get the last lick until someone calls even stevens lol typing this out makes me realize we’re weird and gross lol. —emiretl

Burp in each other’s faces, trying to be as long and loud as possible. —thatkellygirl

We’re actually like super gross. He always pops my pimples, I scratch his balls,we use the toilet in front of each other and have no shame about farting. Thinking about it now, we’re a really gross couple-ew. —Kojinute

I’m not sure if anyone else knows this… but you can pull up on the skin and blow up an uncircumcised penis like a balloon. Have we don’t that on multiple occasions? Does it always make us laugh? Yes. And yes. —K_Supreeze

I pee in every shower I’m ever in. So if we’re sharing a shower, he’s getting peed on too. —frozenbanana

I have veneers on my teeth so I’m not supposed to take bites out of whole apples. If we are sharing an apple with no ability to cut it up my husband will take a bite, spit it out in his hand, and then give it to me so I can have some. —laurab4dc4fd1bc

We both share one shaver for our faces and everywhere else….—larryt438ddf81f

My Husband and I weigh ourselves before and after poop. Then we compare who had the biggest poop and claim victory. I don’t know what victory does but we just walk around feeling real good about our big turds. —faiths4d06bda59

I’d clean out my exes ears with a Q-Tip and be amazed by the amount of wax that would come out. —taraogoart

Him : Sniff my finger I swear it isnt anything bad Me: (tentative) Him: No its like, a unique scent of herbs. Me: O..kay (sniff) GAG NO ITS POOP WHYYYYY. —ILikeNarwhals