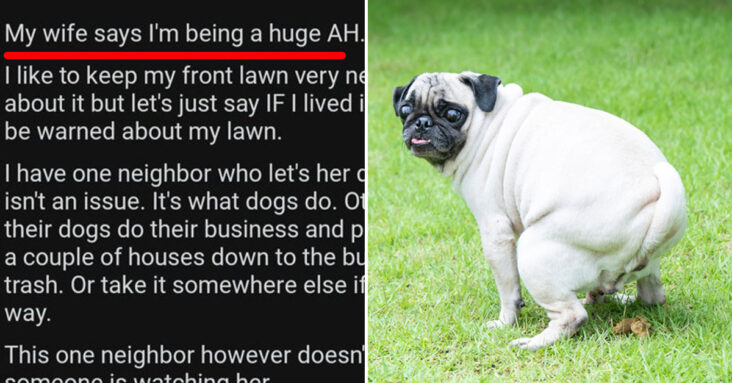 As a dog owner, there’s nothing that infuriates me more than other dog owners who just let their furry friends take dumps wherever they want without cleaning it up.

This man’s neighbor repeatedly left dog poop on his lawn, and he took matters into his own hands — or rather, lacrosse stick — to return her “property” to her.

His wife proclaimed him to be a “huge AH” and so he took to Reddit to ask for their judgment, although the post has since been removed for violating rule 13: no revenge stories.

“I like to keep my front lawn very neat and tidy. I’m not OCD about it but let’s just say IF I lived in an HOA I would not ever be warned about my lawn,” he started the post.

OP explained, “I have one neighbor who lets her dog crap on my lawn. This isn’t an issue. It’s what dogs do. Other dog walkers also let their dogs do their business and promptly pick it up and walk a couple of houses down to the bus stop and put it in the trash. Or take it somewhere else if they are walking the other way.”

He continued in the post, explaining that the woman only would pick up her dog’s poop if she knew someone was watching her. Because of this, he began watching his doorbell camera footage from his office and had proof of her letting her pooch poop on his lawn without picking it up afterward.

Since then, he says, “For the last two weeks I have been using my old lacrosse skills and a homemade poop flinger to return her property.”

“I may have gotten enthusiastic and it didn’t always land on her lawn. Sometimes the house, sometimes her sidewalk, one time the roof.”

He ended the post by saying, “As stated my wife thinks I’m being a jerk.”

The people of Reddit had mixed responses, although many agreed that he was not the AH.

Others proclaimed that, rather than flinging the dog’s poop back onto her property, the man should have a conversation with her, and that they were both the AH.