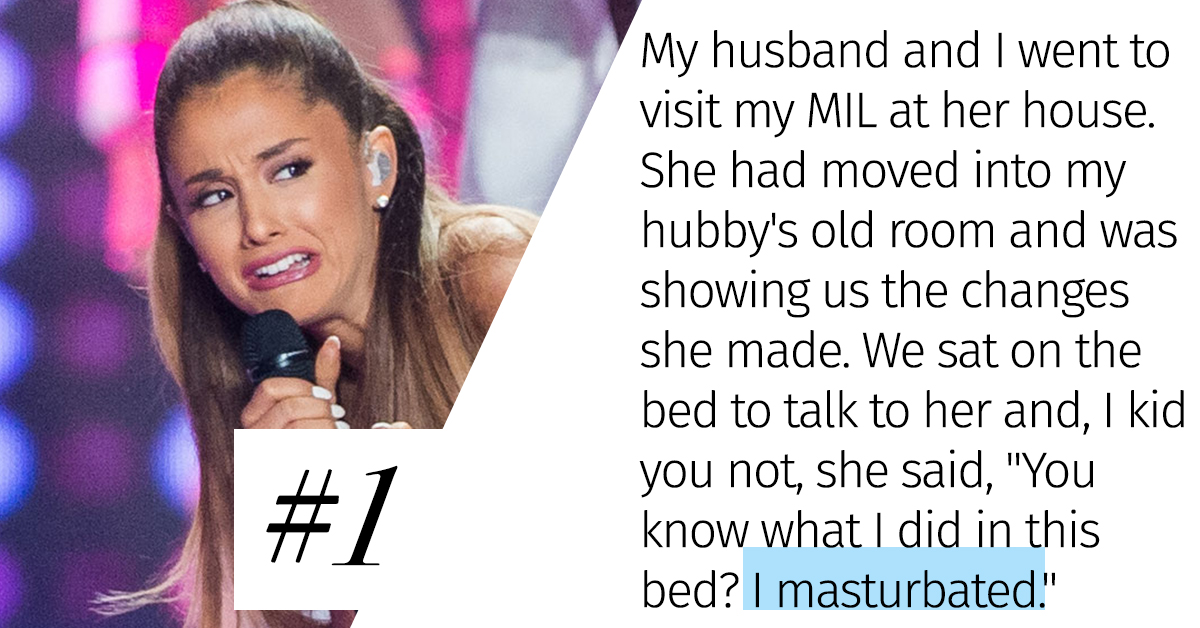 Whenever you consider marrying someone, you’re not just marrying that one person—you’re also marrying their family. For example, if you hate your SO’s mother or father, you’re in for some trouble seeing as they will become your family once you say “I do.” Many people end up splitting over disagreements on their friends and family, but, others brave the storm and put up with all of the crazy. And, for that reason, we have wonderful people like these BuzzFeed users who share their stories and traumatic experiences with their in-laws.

My MIL chose to have my Brother-in-laws funeral on my first wedding anniversary with her Son. She could have waited a week, but chose to punish me instead. She also wore purple at my wedding when the wedding party was told to exclusively wear pink, black or, silver. I’ll never understand.

After I married her son, she posted a bunch of my wedding pictures with nasty comments. Things like, “the cake, which no one ate,” “the whole family, plus the bride,” “this is the only picture of the original 6 (her and her kids) SERIOUSLY?!” She was also mad that my photographer didn’t know that she was my flower girl’s grandmother. She posted all of it publicly on Facebook.

My husband and I went to visit my MIL at her house. She had moved into my hubby’s old room and was showing us the changes she made. We sat on the bed to talk to her and, I kid you not, she said, “You know what I did in this bed? I masturbated.”

My mother-in-law got upset that I wouldn’t tell her which sex position her granddaughter was conceived in.

My MIL unfriended me on Facebook…twice! The first time I was pregnant with our first and her first grandchild and I was typical first time mom and by the book. I was worried about our cat smothering the baby (I know, dramatic) and asked if anyone could take him, even on a temporary basis until the baby could roll. She posted on Facebook that I was a horrible pet owner (went get into all the my husband and I have done for our pets) and I put her in her place by reminding her of that and that this was my first child and I didn’t know. She unfriended me and uninvited herself to the hospital to wait for the delivery. She came. The second unfriending is a lot juicier and, over a year and a half later, still in place.

Broke into my and my (now ex) husbands house by breaking the window above my toddlers toy box. Stole all the baby books and photos and dumped a can of coffee into our 60gal salt water fish tank.

She took my pellet stove fireplace, insisted she needed it for warmth and sold it for thousands of dollars and left a gaping hole in my house. Took a diamond ring of mine, told me she will give me money for it and never did. Exhusband cheated on me but she gave ME a religious video about how women must learn to forgive. WHAT.

Within the first 15 minutes of meeting my mother-in-law for the first time, she casually whipped out her boob and started to show me a strange mole she was concerned about. Then, she went into great detail about the vaginal mesh she had put in. Thankfully she didn’t try to whip that out to show me.

I was hosting Thanksgiving dinner and spent about seven to eight hours cooking. My MIL showed up with duplicate dishes of just about everything I made (we told her to only bring two dishes, tops). When I commented that we had a lot more food than I was expecting, she said “Well, we don’t really need to put yours out, do we? Just put yours in the freezer.”

My MIL keeps in regular contact with several of my husband’s exes through Facebook and will call them with updates, despite him telling her to stop. She even tried to reunite my husband with one particular ex who had cheated on him.

On the way out the door to go to the rehearsal dinner for my wedding, my MIL patted my stomach and asked if there was “something I wanted to let everyone know” about why we were getting married, implying I looked pregnant.

My MIL wore a wedding dress to my wedding.

When asked how my husband was, where he works, etc., I overheard my MIL say, “Yes, Matthew met his wife and gave up all his dreams.” I wish I could make this stuff up.

My MIL told me in front of my own mother that I needed to have sex with her son seven days a week and I need to have an orgasm at least five days a week in order to get pregnant.

At my sister-in-law’s wedding, my 3-month-old son was having a really hard week. He started teething, got his second round of shots, and had a horrible allergic reaction to cradle cap shampoo. A midwife friend of mine was able to take him during the ceremony because I was a bridesmaid. She was finally able to calm him down by singing. After the wedding, my MIL walked up to us as I was taking my son back and said, “She’s a lot better at this than you are.”

My MIL showed up to our room the night after our wedding at 5 a.m. and crashed our entire honeymoon!

When my husband and I were going through the home-buying process, we found out that my MIL had a credit card in my husband’s name that she opened when he was 18. When we confronted her about it (because it had a $3000 balance) she lied and said it was his debt from college that she was graciously paying off to help him out. I looked online at the statements and the previous purchases that were from boutiques in her home town. She also told me she wasn’t sure how the whole ordeal affected me at all considering it was in his name and not mine. It very easily could have kept us from getting a loan to buy a house. I don’t trust her at all!!

My MIL and i get along fine but a few years ago she gave me salmonella by giving me a piece of mostly raw chicken. I guess i should have looked at it before i ate but anyways it made breastfeeding my 4 month old very difficult because i had diarrhea and was vomitting simultaneously and was super dehydrated. I never said anything to her and asked my husband not to say anything either, safe to say I cut into everything she makes first before biting into it now.

She came to visit in the hospital after my long, difficult c-section. Though she was fully healed from a surgery a few months before, she insisted my husband fetch her from the entrance and bring her to the room in a wheelchair. She then propped her dirty street shoes on my clean, sterile hospital bed and proceeded to talk so loudly the nurse couldn’t properly run my baby’s hearing test. When the nurse asked her to talk more quietly she snapped at the nurse. When my husband finally told her it was time to let me get some rest, she said, “I’m sorry, is this all about you?” I lost it and yelled “it is about us and our new baby!” My blood pressure spiked so high the alarm went off and nurses had to come and ask dear MIL to leave. She later wanted an apology. She never got it.

She stopped me at the door to her home and told me I wasn’t welcome.

She got on her knees and begged me not to to marry her son… the night before our wedding.

After I had my son all I wanted was a beer. I wasn’t nursing or anything. My husband took a picture of me enjoying the beer and holding my son and she replies to the picture saying mother of the year. I literally wanted to hit her.

I have been married to my husband for 6 years, together for 8 years. My MIL has never remembered my birthday. After I had my baby( her grandson) she came over to meet him she asked me “ are you sure their isn’t another baby in there? You still look pregnant” she’s horrible!

I was in the hospital having my third baby in under 4 years. My mother in law proceeded to attempt to re decorate my house. She brought art from her house and hung it on my walls and removed some of my art that I had hanging. I came home with a newborn to see her thrift store crap hanging on my walls. I was furious.

The first time I met the mother in law she turned to my boyfriend (now husband) and said “I’ve just been the the lawyer to put the house in a family trust so certain people can’t get their hands on it.” She said this whilst glaring in my direction. It was more hilarious than hurtful, TBH. Petty cow.