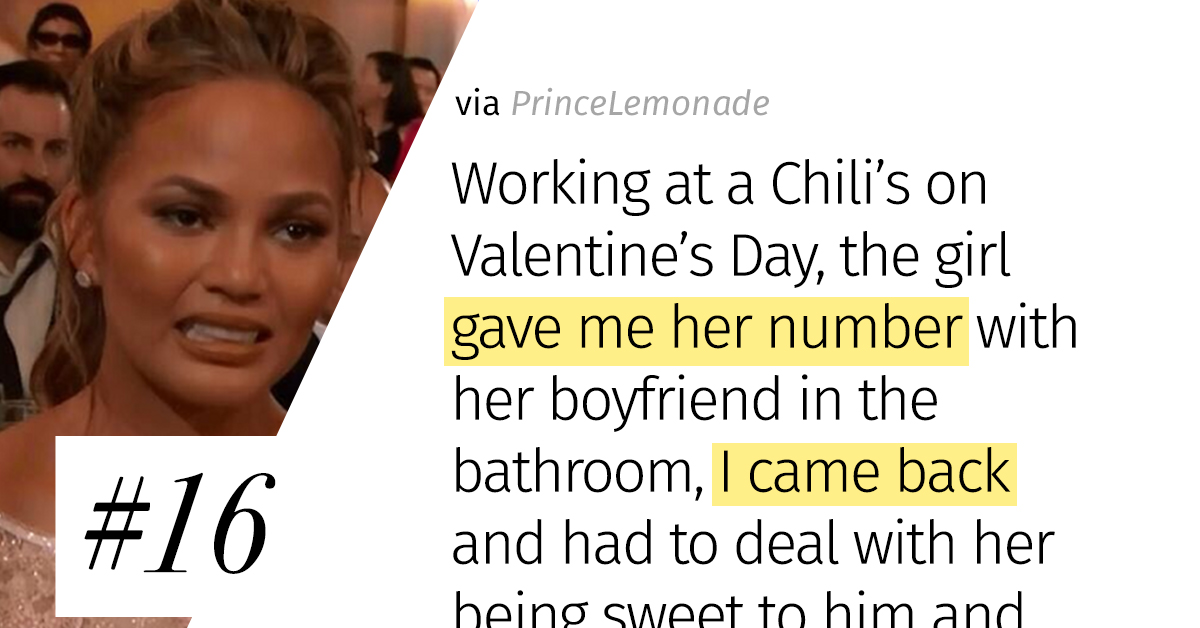 All service industry employees and veterans have tales the rest of the world simply would not believe. The types of characters that reside in the kitchen and on the service floor are beyond description and sometimes even comprehension.

Though there are those patrons who are sweet, generous, and enjoyable to talk to, there seem to be far more freakazoids out there, intent on ruining somebody’s day.

Then there are couples. Couples who are clearly on their first date. Couples who take sadistic pleasure in torturing their server. Couples who are fighting, or cheating, or divorcing. These are their stories. Dun DUN (Law & Order sound effect).

Redditor u/StittDownAndListen recently asked the Reddit community, “Waiters and Waitresses of Reddit, what is the most awkward couple date you have ever witnessed at work?” The responses are bewildering, upsetting, and also somewhat hilarious.

First date, I would estimate college age. They’re eating and the girl says “I’m having a really nice time, but my friend just texted me and asked me if I wanted to hang out, and I said yes, so I actually have to go.”

Had a couple come in one night and everything seemed to be going fine. We just hired a new sever who was training and I asked her if she had any questions. She was still nervous about greeting tables so I told her she could shadow me and watch what I do.

Turns out the guy was her bf on a date with his side chick and he didn’t know she just got a job there.

She didn’t get fired for what she said.

Husband and wife fight. Wife cried. Husband got up and threw a pizza slice at her face.

I guess you could call this a couple date. I was working at a wine bar when a married couple sat down on a pretty slow night. I went over the specials and they ordered. Once appetizers came out the man thought it would be a good idea to serve his wife divorce papers.

I did my best to avoid that side of the bar. I did bring out tissues for the wife who was breaking down. I ended up boxing up the dinner. The guy paid but I do not envy that ride home.

When I was bartending this guy came into the bar on a week night, average looking guy, late twenties. He sat down and asked for a drink and told me he was nervous because it was his first date in 3 years and they had met on tinder. He arrived 20 minutes before her expected arrival to get rid of some of his nerves….two hours passed and he waited for her with no text or call explaining she would be late.

This woman walks in, walks up to the guy and I’m thinking “wow! She really came! “ . She looks at him and says “Are you Joe?”, the guy replies yes and gets up to properly greet her looking incredibly excited….she says “no thanks…” and just leaves.

What a foul creature.

Joe(not his real name) and I proceeded to get way too drunk for a Tuesday. Poor average Joe.

There’s a habit of some older couples where the elderly gentleman will order on behalf of his wife. I guess it might have been cute and romantic once, but it doesn’t work with some younger couples.

I was serving a younger couple (early 20s), who seemed pretty early into the relationship. They were ordering drinks and he orders her drink for her.

Far from being dazzled by him knowing what she wanted, she didn’t want any of it “Well I’d actually like a latte, not a coke. But fine whatever, if I don’t get a say…”

He responded quite angrily with “oh sorry, have what you want then!” She got her latte and he glared at me. They ate and left.

Not been in since, I’m sure they’re doing well.

Couple came into the restaurant dressed very goth. I wasn’t their server but I was running the cash register just a few feet away. They proclaimed to everyone that they were energy vampires, but not to fear them because they won’t hurt us.

They said they didn’t need our food for sustenance, but enjoyed the tasted. After ordering the meal they then politely asked the waitress if she would stick around for a second so they could feed off of her aura so they could have enough energy for the night.

The waitress said ok and gave me a side glance over her shoulder that I knew meant “I better get a good tip for this”… The couple clasped each other’s hands, closed their eyes, and made sucking sounds for a solid minute before leaning back in the seats and sighing as if they had just had a turkey dinner.

The waitress was indeed tipped well for her delicious energy.