When it comes to other people’s desire to have kids and how, you really need to mind your business unless you’re planning a family with them. You never know what’s going on with somebody and you’re not entitled to deeply personal health information.

The parents of u/throwRA01982 learned that the expensive way, and now they’re real mad. And also transphobic, but the OP still feels bad about the situation. She asked on r/AmItheA**hole, “AITA for not telling my family that my husband is transgender?”

She says her husband is trans, and before they got married they agreed they wanted to adopt. Adoption can be a long process and they’ve been working on it, but a child is still likely a few years off. The OP says that her parents are aware of their adoption plans, but they’ve never told them that her husband is trans because they were fearful they wouldn’t accept it. When her parents asked if they’d seen a fertility specialist the couple said they couldn’t have kids and didn’t want a specialist because of their adoption plans.

So what did her parents do? A damn stupid thing:

“For our anniversary a couple days ago, my parents told us they’ve prepaid for a consultation at a fertility clinic. They’ve put down £200 just for the initial consultation and another £120 for a semen culture (I already have a son from a previous relationship so they know I’m not the problem). They’ve prepaid for it, and sent us an invoice from the clinic confirming that the consultation and test have both been paid for. They’ve also paid for train tickets (£108) for us to get to the clinic. My husband then decided to come out to them as transgender and explain exactly why he couldn’t have a semen culture done (no semen). [Edit: to be clear, he chose to tell them, and he told them himself, I didn’t “out” him]”

She says since her husband came out “all hell has broken loose” and her parents told her they should have known who they were “allowing” into their family. They’re demanding an apology and a REFUND on the intrusive, unasked for “gift” of a fertility visit:

“I’ve said we didn’t ask them to put that money down and it was disrespectful of them to do so when they know we want to adopt, and it shouldn’t matter to them whether my husband is cis or trans.

However, they feel they’re owed an apology for hiding the truth and expect us to refund the money they paid out, as they would not have paid it out if they knew the truth.

We think we might be TA because they were coming from a good place and honestly we probably should have told them sooner.

Are we TA for not telling/refunding them?”

Just….NO. Absolutely not. They didn’t listen to you, they trampled over your boundaries, they ignored the words coming out of your mouth, and book a procedure for your husband’s body without his permission. GTFO! That’s pretty much what everyone said: 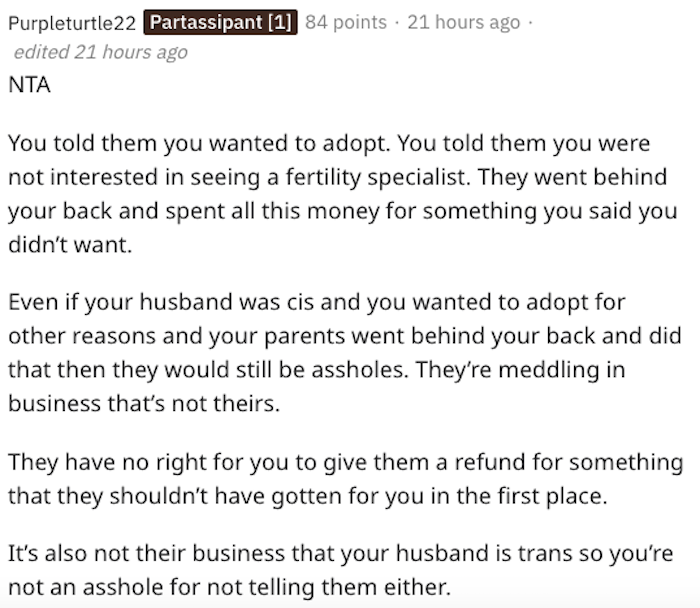 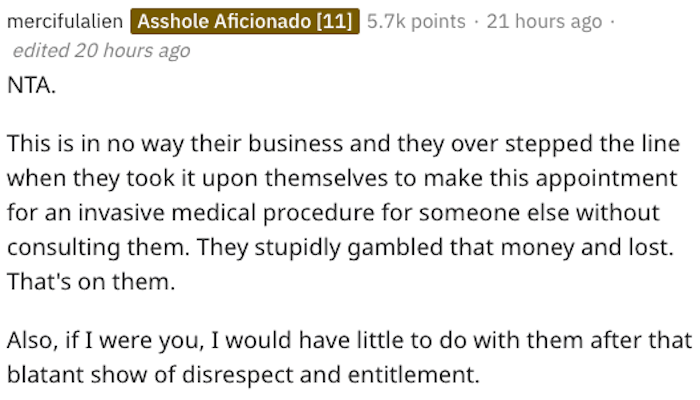 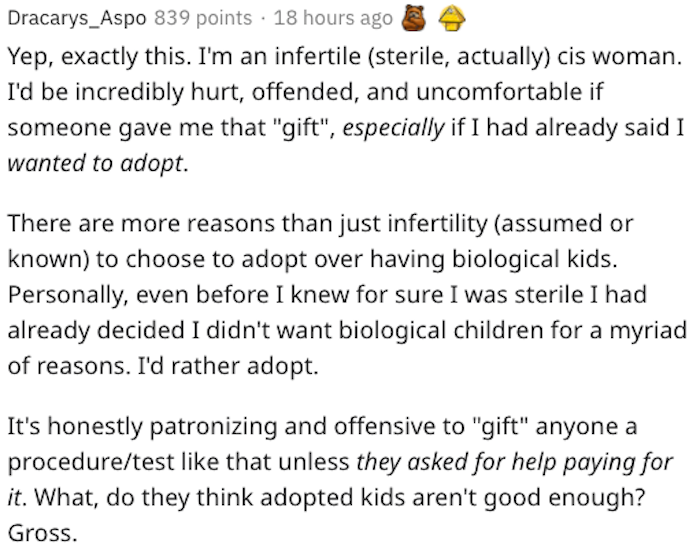 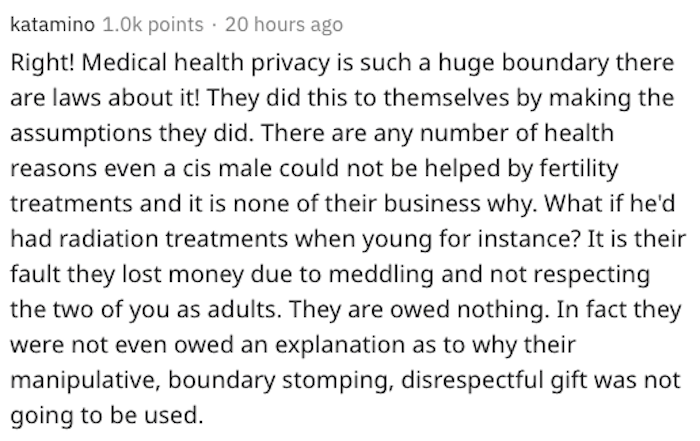 It also seems like the OP is in England, where IVF and other fertility treatments are covered to an extent under NHS, so not only are they transphobic busybodies, they spent their money for no good reason. I hope the OP and her husband detach themselves from these people, because the kid they adopt someday deserves better grandparents.