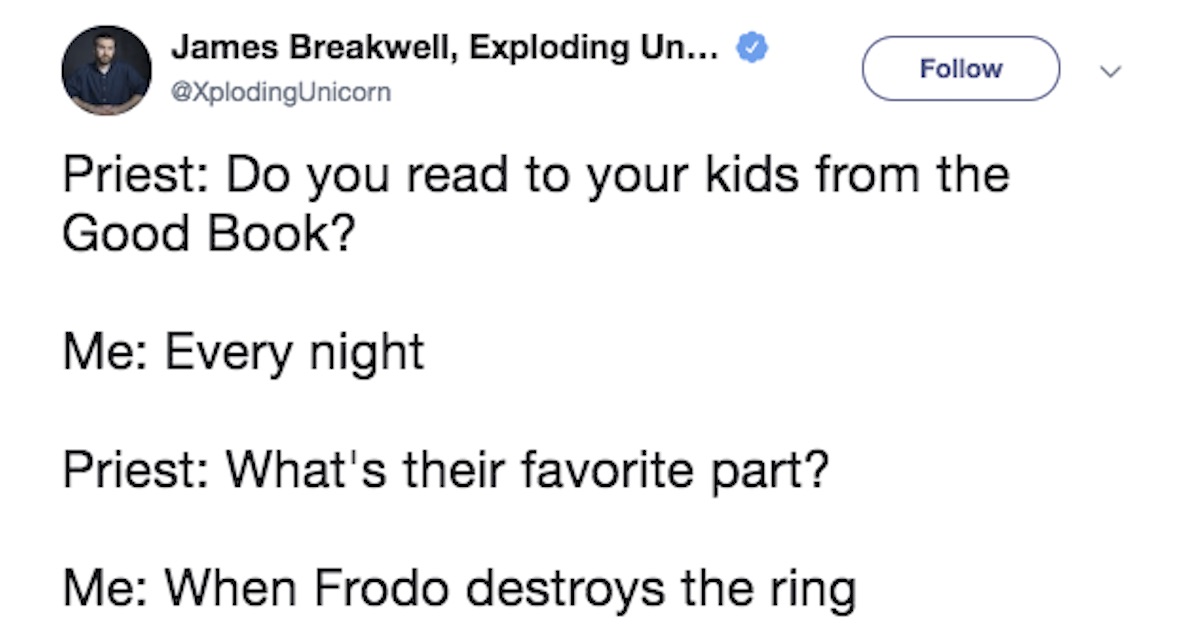 Who wouldn’t rather lose themselves in a book than have to struggle through a possibly awkward conversation with a human? Books themselves are full of humans and also places, so they’re really the best of both worlds. You can read books over and over again, and they never judge you. I’d rather be stuck with a book than a person on a train any day. So here’s to all the readers out there!

If I were a literary character, I would be the grandpa in Charlie & The Chocolate Factory that doesn't get to go

You seem like the type of person that says the movie is better than the book.

Ho ho! Goddamn good thing we didn’t have social media when I was a teenager! The LAST thing I need now is pictures of me reading Lord of the Rings alone in bed popping up and ruining my life.

if you have a crush on someone, you can take a risk and tell them or you can change your name, become a count, uncover a massive fortune in gold and jewels buried on a remote isle and slowly avenge yourself on her husband who threw you in prison to die.

Dumbledore: “What are your strengths?”

Dumbledore: “Can you practice magic?”

Candle scents that I would buy:

Professor: then just flick your wand and–

Professor: err that’s not really how it–

was listening to the very hungry caterpillar audiobook in my car and accidentally spent $174.09 at the drive-thru

HOGWARTS JANITOR: Isn’t there a spell that could clean this up?

DUMBLEDORE: [handing him a mop] Yeah but I’m tired.

TOLKEIN: you wrote a book about a mythical land didn’t you?

LEWIS: yes, the Chronicles of Narnia

Ever realised how fucking surreal reading a book actually is? You stare at marked slices of tree for hours on end, hallucinating vividly

Priest: Do you read to your kids from the Good Book?

Me: When Frodo destroys the ring

Just overheard someone say, "I wish I had a Kindle that never ran out of batteries."

reads book: *favourite character dies*
me: maybe if i read this again he won't die this time

You should be able to call into work because you're mourning the end of a really good book.

Librarian: can I check you out?

Me: sure [spins around]

Librarian: I meant your book

If you don't touch your face in your author photo, readers might assume you don't have hands. "How did (s)he even write this?" they'll say.

We get it poets: things are like other things