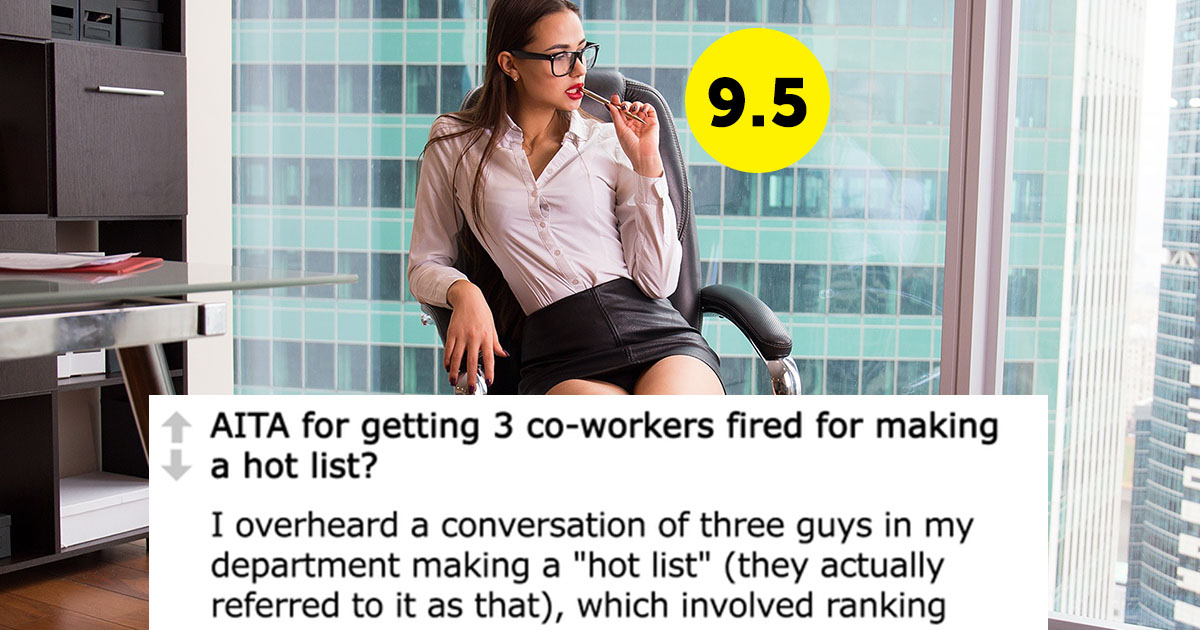 A woman on the subreddit r/AITA with the handle u/HRFiring wants to know if she messed up by reporting three of her co-workers for a conversation she overheard at the bar.

In her post, she writes the event was organized by a supervisor, so everyone there was from work, even if it wasn’t an official work event. She writes about 20 people from the 30 people in their department who showed up.

As the OP was exiting the bar bathroom she heard a co-worker saying her name. She ended up eavesdropping on their conversation and was pretty horrified by what she heard:

I overheard a conversation of three guys in my department making a “hot list” (they actually referred to it as that), which involved ranking every woman in the department from first to last. I was upset and disturbed. I was quite friendly with 2/3 of the guys, actually. Yesterday morning I tell HR and they state that they have a zero-tolerance policy for actions like this. All three men were fired first thing this morning, and now I feel terrible.

The OP says she hated “the way they were talking about women,” but didn’t think they should be fired. But she did know that her company takes complaints about sexual harassment seriously, and might have known deep down that the firing was a possible outcome.

Nobody knows that I am the person who reported them, and I’ve overheard people say that the person is a “snitch”. I’m wondering if I should have just confronted them at the bar and told them how it made me feel instead, but at the time I didn’t feel comfortable doing that. I especially feel bad because I had a fairly good relationship with two of the guys.

She wanted the sub to tell her if she was an a**hole in this situation, but updated her post to say what she’d mostly been getting was harassment from Reddit users.

Though the sub ultimately ruled she’s not the a**hole—the guys who acted inappropriately are—there are a lot of sexist pigs out there who see themselves in these fired bros:

INFO 1: It was not a formal work event, but our supervisor organized everyone going out for drinks

INFO 2: A lot of people are insisting that I am upset because I was low on the list. I tried to avoid making this the focus, but with all the comments I feel like I have to address it. I was high on the list, and was not offended about my placement; I was offended about the fact that they were making a list in the first place. I hate that I even have to write this

ETA: wow this is just about the most toxic thing that has ever happened to me. I came here for judgment on whether I am an asshole in this situation, and I have gotten numerous personal messages calling me ugly, a bitch, fat, a nazi, psycho, etc. I really think something needs to be done about this sub, although admittedly I’m not sure what, because I can’t believe this is the response for somebody using this sub for its intended purpose

update: I will be speaking to HR about the messages I received

While the OP does seem to have a sense of humor about the whole thing judging by her final update, there were people who took her perspective seriously.

“HR didn’t get them fired. Their own actions did.”

Other people had similar sentiments. A user named milee30 wrote:

It’s understandable that the OP feels guilty about the situation, but maybe someone reading this sub will know better for having seen the outcome of ranking your co-workers by hotness.