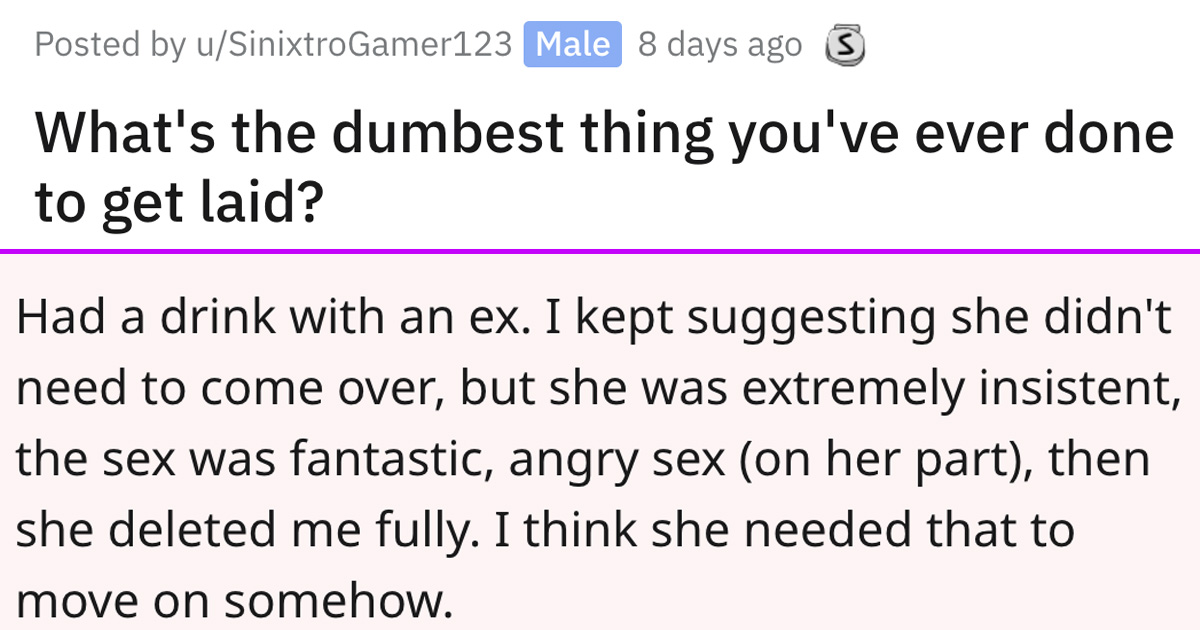 Young, dumb, and in love. When the love bug bites, most people become consumed by the object of their affection. You’re constantly trying to spend time with them, you want to see them happy, you’ll even do whatever it takes to have sex with them. But sometimes, trying to create the space for those special and super intimate moments can lead you to make questionable choices.

A recent Reddit thread posed the question: “What’s the dumbest thing you’ve ever done to get laid?” and the responses are pretty entertaining.

From ridiculously long trips to wild adventures to major lifestyle changes, these folks were willing to put in all on the line to get the one they wanted.

Here are 20 of our favorites, and let’s just make it clear: we’re not judging. We’ve all been there but here’s to making better choices in the future.

1. Stephenie Meyer would be pleased

Read the entire Twilight saga in a single weekend.

Drove hours. In my defense 100% worth it and I got through a few albums I really wanted to listen to…

3. It all worked out in the end though, right?

I travelled to Usa from europe Just to pick up my gf, she was forced to move there by her parents, 40 days before her 18th birthday, its needlees to say her parents didnt exactly like me, but hey I married her, and they still dont like me, so its win win

Pulled into an empty parking lot in a state park after Dark. About two humps in a cop pulled up got onto his intercom and said put your clothes on and step out of the vehicle. He proceeded to hold us for two hours and then ended up charging me with the being in the Park after dark and gave me a $500 ticket.

Had a drink with an ex. I kept suggesting she didn’t need to come over, but she was extremely insistent, the sex was fantastic, angry sex (on her part), then she deleted me fully. I think she needed that to move on somehow.

Went to a Kenny G concert.

8. Strangers are just friends you haven’t met yet…

After a break-up many years ago, I posted [in another thread] I got a message from a girl who gave me an address. Being young, dumb, and full of c-m I didn’t even bother to verify she was legit and just turned up.

Arrived at the address to find a real woman and not somebody plotting to steal my kidneys.

9. Questionable decisions were made.

Said I love you. We were hooking up for awhile, hadn’t had sex in a few days. She said it first, I said it back, long story short we don’t speak anymore.

Push my car out of her driveway in my underwear so grandpa wouldn’t hear me start it.

Went to jail for a night 🙁

Became a vegetarian on the spot. Did it for two years.

Said pretty please with sugar on top. Lowest point in my life.

Snuck out of the house at midnight, made a 5 1/2 mile walk through woods, fields, a cemetery then through town with very strict curfew, into her backyard. Took about an hour if I rushed. Knocked on her window and she let me into the house. We did the deed, then at 5am I made the trip back. Climbed back in through my window, and waited for mom to come wake me up for school. Did this for months and never got caught somehow.

17. Shoutout to Archie and the gang.

18. Some things are more important than health?

Long story short, I stole my moms car when I was 19. I tried to roll it out of my sloped garage in neutral so she didn’t know. It got out of hand and I tried to stop this 2016 Chevy Suburban like I was super man. It didn’t work. I got my leg pinned in between the Chevy and a parked car and nearly broke my leg. I totaled the parked car and destroyed the Suburban’s bumper. I severely sprained my right ankle. I should’ve probably went to jail but my parents had enough money and comprehensive insurance.

I still went and banged that girl and we ended up dating for almost 2 years. Damn.

Betrayed a friend….it was ten years ago and I was 18 but it was shitty. I knew he liked her but I liked her too he was just way more outspoken about it…..oh and we were roommates

Our 5 year friendship for the most part ended that night