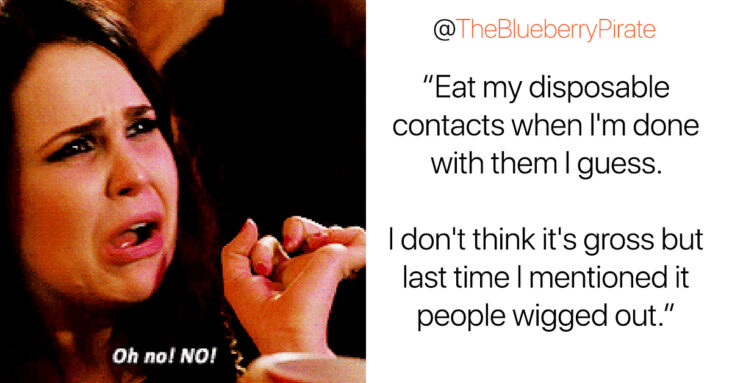 So…I stumbled across this Reddit thread started by u/youknowthatimnot, who asked, “Men of Reddit, what is the most disgusting thing you do in private?” before adding, “Only asking because my brother (a grown-ass 24 yr old man) is currently in the bathroom taking a dump while eating a bowl of lucky charms…” and the update: “He literally came out of the bathroom asking if we have a plunger.”

Well, friends. I learned a lot. I hope you do too, but be forewarned: you may never look at your fellow humans the same way again, as demonstrated by the following testimonials (Reddit comments):

“After reading this thread, I am no longer disgusted by what I do in private anymore.”—LogicReddit

I haven’t met anyone so far that didn’t think peeing in the shower was gross. I’m sure they’re liars but still. I also blow my nose in to my hand in the shower and just wash it away.—Dynasty2201

I jack it in the work bathroom sometimes. Sometimes you just gotta jack it before you can get back to work.—emartinoo

Probably pick my toenails, sometimes I do it with my teeth—LEGORomanSoldier

Enioy the smell of my farts. I guess it’s true everybody likes the smell of their own brand.—gratefulphish420

Eat my disposable contacts when I’m done with them I guess. I don’t think it’s gross but last time I mentioned it people wigged out.—TheBlueberryPirate

Not me but my friend removes the drain grate and poops in it when he showers.—wiggy2g

I sometimes piss in empty water bottles. I have no clue why.—allmoneyin

Pee exclusively in the sink when I’m at home.—musicalspheres

I have a “punish towel” in my bed side table for late night or early morning cleanups. Wash it every couple weeks or so. It’s easier than socks and whatnot—justtwiggy

My cousin and her fiancé eat each other’s booger’s they look at them and then offer them to each other. They don’t do it privately either,..—LPickleRickl

If you sit on the toilet backwards, you can use the tank as a table so you don’t have to hold the bowl of cereal while you shit. You’re welcome.—kreative19

Sometimes I eat my dinner in bed in front of the TV, completely naked. I will occasionally drop some food on my gorilla hairy chest, I take the food and check it for hair and if it’s ok I’ll eat it. Today it was cream cheese and it had no hair but I do remember one time eating some of my own hair chest while doing this and it was f**king disgusting.—Lvnatic92

In private as in only when we’re with the two of us. My boyfriend makes me smell his farts, like he yells ‘Fast!’ and I run/climb/roll over to wherever he is and I put my face in front of his arse. He also makes me “eat” his bellybutton fluffs. With consent.—otter105

Suck water up my nose and blow it out in the shower. Learned this trick as a dry waller and while it’s nasty in the moment, boy does it feel great after. Edit: didn’t know this could be dangerous.—FA8LE

I have a poop loofah. I’m a hairy man who has a hairy ass. That means I’ll occasionally get dingle berries if I dont take care of myself. So I bought a brown colored loofah once and I use it when showering so I can scrub in between my butt cheeks to get it squeaky clean. I use head and shoulders with it so my ass hair is as clean as possible. The gross part is that I’ve had that loofah for probably 5 years now. I should probably replace it.—Joko_on_Smoko

I found rock candy on the dirty as floor of my car, got super excited and put it in my mouth. It was just a rock.—fckfcktyfckfck0