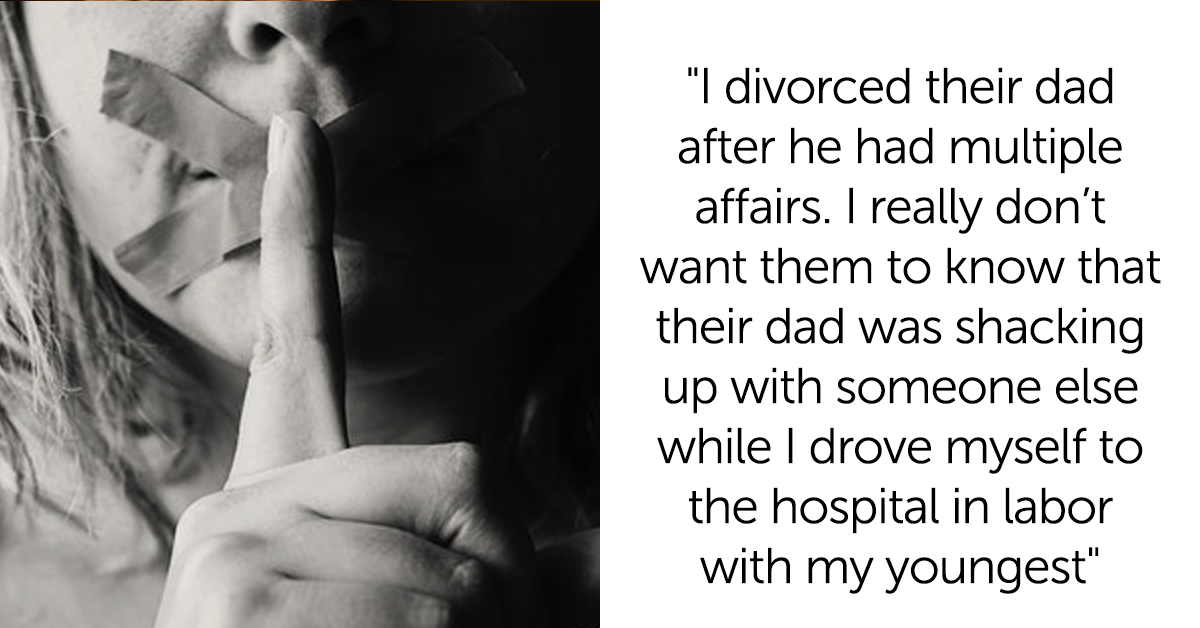 I think the general sentiment is that parents shouldn’t keep secrets from their kids, but that seems so incorrect. Of course parents will have things they keep from their children, it’s a parent’s job to protect. And the world out there can be a dark place.

The parents of the BuzzFeed Community recently answered a call to share the deepest, darkest secrets they have kept from their children. The answers are going to break your heart, so go grab that box of tissues.

“My son was actually a twin, but his brother died when he was 2. He’s forgotten over time, and my wife and I have decided to let sleeping dogs lie. We believe there’s no reason to traumatize him.” —cakecop0

“My kids always ask me why their first cousin looks just like them. I have yet to find the courage to tell them that he is their sibling and not cousin. I had several one-night flings with my sister-in-law, resulting in her having MY child and not my brother’s.” “My kids are not the only family members in the dark; no one knows but me and the S.I.L.” —Anonymous, Georgia

“Told the kids (6, 9, and 15) that their dad was in Canada on business. My oldest caught on quickly, and we worked together to keep the truth from the little ones through eviction, homelessness, and food scarcity that he was actually in prison.” —51, California

“My son was 4 when his mother died. He is 7 now. All he knows is that she was ‘sick.’ He doesn’t know it was mental health struggles and suicide. I don’t ever want to tell him.” “I fear the day he may ask for details. If he does, I will tell him the truth. But for now, ‘Mommy was sick’ is sufficient, and I constantly remind him about how much she loved him. He sleeps with a blanket she got him, every night. She would be so proud of how far we’ve come. Wish she could see it.” —36, Texas

“I hope my kids never find out that I divorced their dad after he had multiple affairs. I really don’t want them to know that their dad was shacking up with someone else while I drove myself to the hospital in labor with my youngest.” “Or how when I called him to tell him that my water broke, he told me to lay back down. I started calling divorce attorneys from my hospital room.” —46, Ohio

“My wife and I met in high school. We did all kinds of drugs together, used to skip school, and partied all the time. My kids are pretty young, but I don’t think I’ll tell them about this. They think we’re super boring, and I’m fine with that.” —butthead953

“That I was dating their mom’s sister, but when I went to a family dinner for the first time, I saw my girlfriend’s sister. I fell in love on the spot, and now she’s my wife. We don’t talk to my wife’s sister anymore. I’m taking this one to the grave.” —35, Canada

“They don’t know that I hate their dad so much; he’s a narcissist who is full of false promises, and I watch him repeat the same patterns over and over again. And if they ever learn this, it will be from experience, not from my mouth.” —krystinas48f5108c2

9. Had an older sister

“My daughter doesn’t know she had an older sister who tragically died years before she was born.” —31, Arizona

“That for the entire time I was pregnant with my now-15-year-old son, I worried that his dad might not actually be the father.” —44, California

“My son has an older half sister that he doesn’t know about. His father got a woman pregnant on a one-night stand, and she moved away right after the positive pregnancy test. The baby was born a few months before I met him.” “He had a picture of her but never met her, and later signed his parental rights away when they requested. My son is now 22, and I know this will hurt him.” —46, Arizona

“I tell my kids every day their dad loves them and wants to see them. I’m not allowed to tell them the truth that he abused them when they were little, bankrupted me, and abandoned us — and is now suing to take the kids from me since he can keep paying lawyers and I can’t.” “When my kids are old enough to learn the truth, I’m terrified they will hate me for not warning them about their dad.” —39, Georgia

“My oldest kid is not my husband’s biological child. His biological father chose to never be involved, but my husband has been there ever since my son can remember, so he’s always been Dad. I’ve always felt that there needs to be a time when we tell him, but my husband never wants him to know.” “He’s 15 years old now and doesn’t have a clue.” —36, Colorado

“I got pregnant at 16 by my son’s father, who I later married and divorced. I had an abortion. My son and I are really close, but I haven’t told him because it happened seven years before he was born.” “I also didn’t tell him that his father was abusive. I left when my son was 4 years old. I don’t want my son to carry my trauma.” —u/lisas4bb382393

“My child’s dad was abusive. He also cheated on me several times with another woman he has a child with.” —32, Canada

16. Doesn’t know he has a half brother

“My ex-husband had a child eight months into our relationship. He had a one-night stand with someone a month before we met, and she never told him she was pregnant; he didn’t even find out until the day after the baby was born. Adoption was already set up, and he agreed that would be best. Fast-forward 20 years, and we have an 11-year-old who has no idea that he has a half brother.” —42, New Jersey

“I’m a single mom by choice. I have a beautiful and healthy daughter who is 6 years old. I lost a baby boy in 2014, the father was a guy I dated at that time, and I was desperate to be a mother to a living child. I tell everyone I got pregnant the second time through insemination by a donor in a fertility clinic. Truth is I was rejected because my BMI was a tiny bit too high. So, I met a guy through a website where you can find men who want to donate sperm privately. We met up, and I inseminated myself with his sperm (we were in different rooms, very clinical, no touching, etc.) and got pregnant on the first try.” “The guy was a genuine, good guy with no interest in having his own children, but didn’t want his sperm to go to waste. I haven’t talked to him since I told him I got a healthy baby. But I’ve saved his name for when I tell my daughter the truth. Maybe it was wrong of me, but I was so sad and desperate after I lost my son. And I’m so happy with my daughter now. I’ve never, ever told anyone this.” —32, Sweden