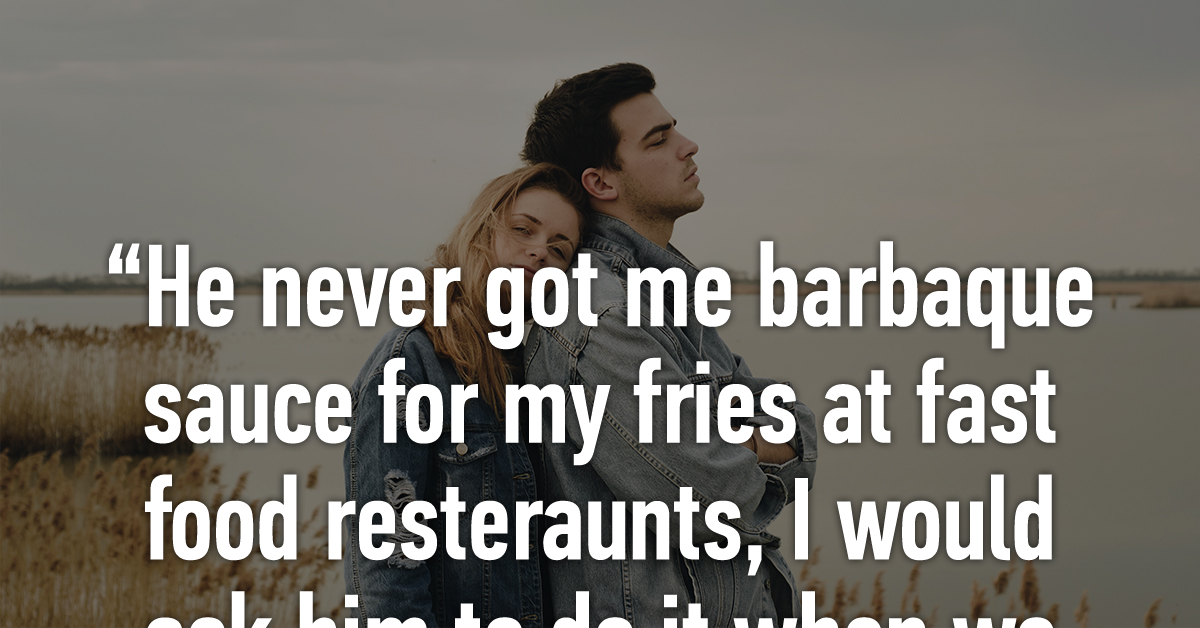 Everyone has their pet peeves and deal breakers in relationships. Small and big, if something is off for you, you just know it. Why stay in a relationship in which you are unhappy when there are so many fish in the sea, right? While some people end relationships for big disagreements—like marriage, children, maybe even religious/moral differences and beliefs, there are those who end relationships for much smaller, petty reasons. Frankly, I’ve never ended a relationship for a “small” issue, they have always been big, glaring red flags. But, these people have ended relationships for teeny, tiny problems and I’m actually intrigued.

I play tennis and I dated a guy that wouldn’t play with me, according to him “unless I was prepared to lose”. Like we couldn’t just rally and play for fun. There had to be a definite winner and loser and according to him that would’ve been me. What a jackass.

After we saw interstellar, he told me he didn’t like it and didn’t “get it”. I know it’s crazy but I love movies and that just made me realize we were not compatible.

When we held hands on our second date, he swung his arms up and down and up and down. I though my arm was going to pop out of its socket. I knew that was the end.

We were leaving Walmart while it was raining and all he had was a bag of socks. He continued to push the cart out of the store and I said we should leave it at the cart return inside so employees don’t have to go out in the rain to get it and other people have a dry cart. He pushed it to his car and left it in the rain. I didn’t go out with him again.

He talked in a baby voice. At first I thought it was a one-off weird occurrence but then he did it far more often. And during serious conversations. Final straw was when he baby talked in front of my friends while we were out to dinner.
Baby boy, bye!!

I once ended things with someone after we went out for drinks and he said “salute” instead of “salud” when we did a cheers.

He always answered the phone by saying “Good Morning!” – didn’t matter what time of day it was.

He showed up for a date wearing a sweater vest.

I was already contemplating breaking up with him, when he made me watch the Minions movie. He had been hyping it up for months and finally convinced me to watch it. When it was over, he turned me and said “wasn’t that horrible? it’s probably the worst movie I’ve ever seen.” That months-long Minions lie was the last straw.

I broke up with a guy because he was an extremely picky eater. I respect people’s tastes and all, but it’s really important to me that in a relationship my partner and I can try new foods together especially when we travel. To me, trying new foods is a wonderful experience and I don’t want to be with someone who isn’t brave enough to try new things.

He hated cilantro. End of story.

He never got me barbaque sauce for my fries at fast food resteraunts, I would ask him to do it when we were at drive thrus and it was too much of an inconvenience for him.

He’d say “open the light” instead of “turn on the light” and every food he ate, he chewed loudly. Two non-negotiables for me are improper grammar and any obnoxious noises emitted from ones head, including chewing and snoring and coughing. Ughhhhh PTSD.

He wouldn’t let me practice my clarinet around him. Sure, I was horrible at it, but come on, at least be supportive!

I can’t really call it a relationship because we hadn’t even gone on a date yet, but we’d been texting after matching on bumble. I realized quickly that things wouldn’t work out when I told him about my cat and how she’s perfect in every single way, and he said she wasn’t as perfect as his. I literally told him “I don’t think I can talk to you anymore” and stopped texting him. There were other reasons it wouldn’t have worked, but that was kind of a big one.

i didn’t want to buy him a present on the trip i was about to go on.

He peed behind a tree in a parking lot at the county fair. He walked by bathrooms and did this. No.

He didin’t like to cuddle, hated Harry Potter and sushi.

My dog hated him and he may have been a world record holder for worlds quickest lay.

I broke up with my high school bf because the bandaid on his finger came off while we were making out. We never found it.

He pronounced “because” like “be-iz” and after a month I could not take it anymore. Drove me up the wall.

Dated a guy who was a HARDCORE movie-talker. Whether it was a horror movie, drama, or comedy.. he would talk and make comments out loud (REALLY Loud) throughout the entire movie. So much so that we would get dirty looks from ppl trying to enjoy the movie. Oh and also, his breath smelled really bad. maybe i was already annoyed by his talking that i noticed his breath but he was just SO oblivious to everything (the breath, the inconsideration for everyone around him, etc). Had to end it.

He was great, but when he fell asleep he breathed SO WEIRD. I couldn’t stand it.