Actress, author, and recording artist Bella Thorne has reportedly been in contact with hackers threatening to expose nude photos of the former Disney Channel star.

Rather than allowing herself to be allegedly held hostage by the hacker’s threat to release the photos, Thorne chose to release them herself on Twitter.

In a tweet on Saturday Thorne wrote, “Fuck u and the power u think you have over me. I’m gonna write about this in my next book” accompanied by text message exchanges with the hacker which included photos and videos of Thorne in various stages of undress. She also included a screenshot of an explanation detailing her decision to release the salacious material herself. 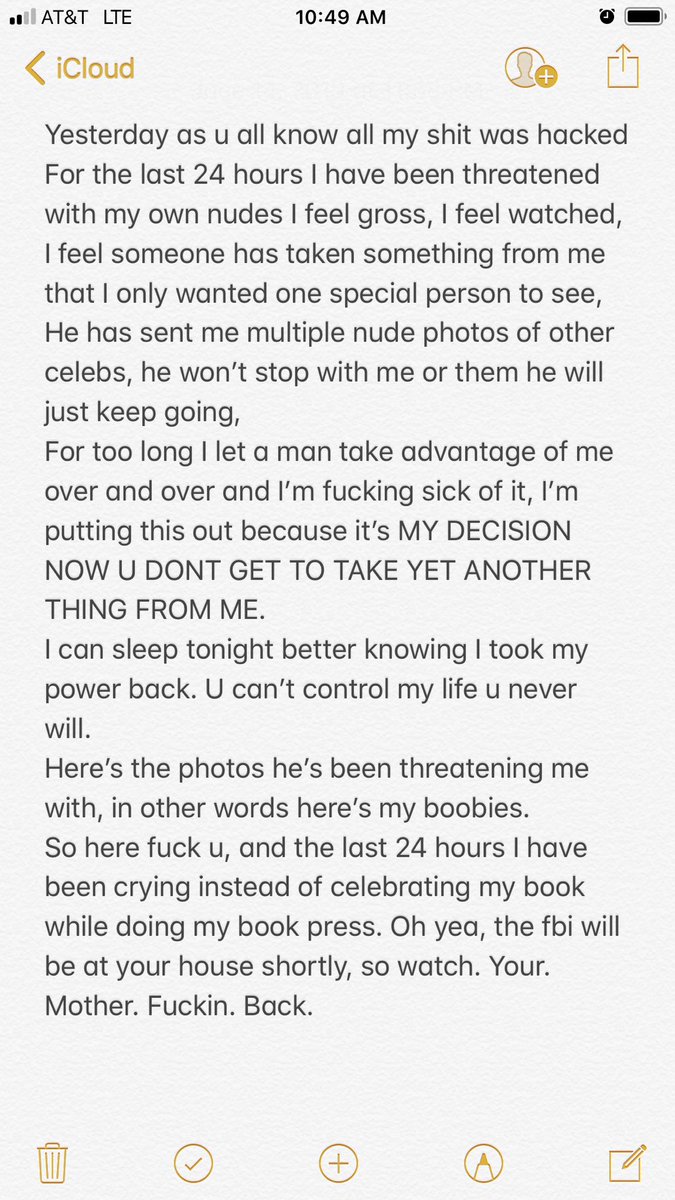 “Yesterday as u all know all my shit was hacked[.] For the last 24 hours I have been threatened with my own nudes I feel so gross, I feel watched, I feel someone has taken something from me that I only wanted on special person to see, He has sent me multiple nude photos of other celebs, he won’t stop with me or them he will just keep going,” she wrote.

Thorne concluded her post by threatening the hacker with FBI involvement but seemed to back off that position later in an interview with The Hollywood Reporter. Thorne said she was upset by the ordeal and wanted to “teach him a lesson” but thought he was a minor.

“As much as I’m so angry […] I don’t want some 17-year-old’s whole life ruined because he wasn’t thinking straight,” she said.

Thorne’s recent experience echoes the 2014 massive leak of celebrity photos from hacked iCloud accounts known as “the fappening” on Reddit, where many of the photos were posted and exchanged. Jennifer Lawrence, one of the most high-profile victims of the crime was also one of the most outspoken against it.

“There’s not one person in the world that’s not capable of seeing these intimate photos of me,” Lawrence told The Hollywood Reporter. “You can just be at a barbecue and somebody can just pull them up on their phone. That was a really impossible thing to process.”