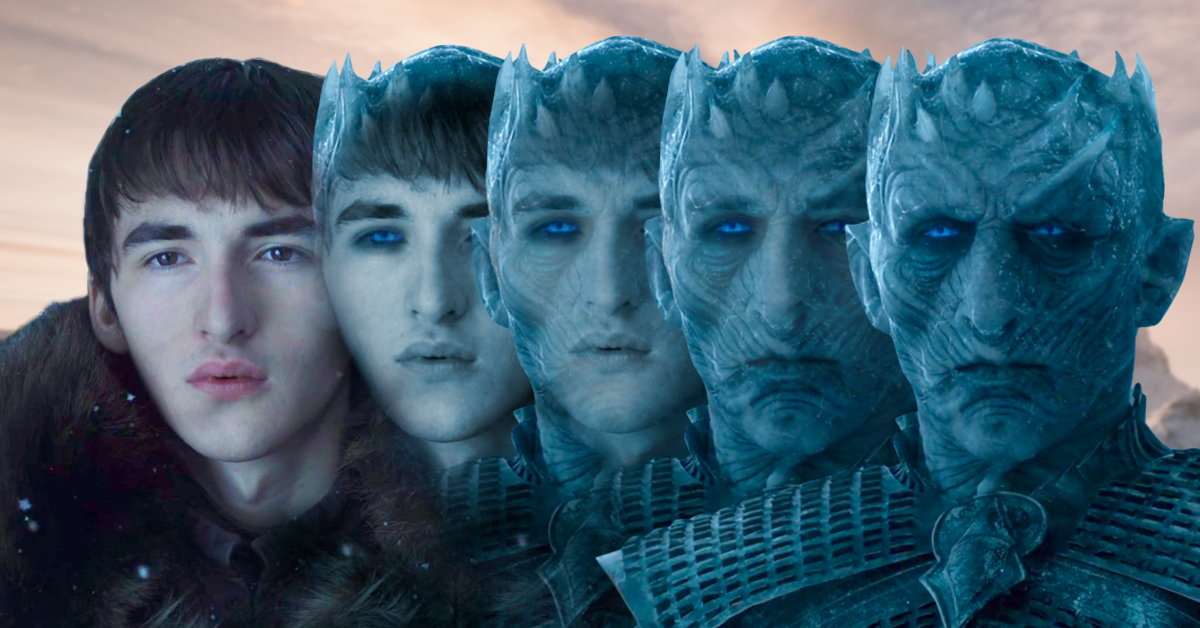 Seven seasons into Game of Thrones, and Bran Stark is still alive. Given their mysterious connection, most fans are expecting the youngest Stark sibling to play a vital role in taking down the Night King during the Great War. Many others think Bran Stark is the Night King.

But let’s back up.

The Bran-Stark-As-Night-King theory has been broken down at length on multiple Game of Thrones fan theory subreddits, and it goes a little something like this:

Bran, a time-traveler and a warg, goes back in time repeatedly to try to stop the White Walkers from destroying all of mankind. He fails several times but with each failure he learns how to go back farther and farther (that’s how time-traveling works in the GoT universe) until he reaches the moment the first White Walker was created.

(It’s important to keep in mind that Bran’s powers are tremendous and unparalleled, even in the Thrones universe; in addition to being able to warg into animals and humans (not something many—if any—wargs can do), Bran is also a Greenseer who experiences prophetic dreams and visions, allowing him to change and alter the past.)

The Stark heir attempts to rewrite history by making peace with the Children of the Forest (who were at war with the First Men, who nearly wiped out their entire race and ran them from their sacred Weirwood trees).

But the plan fails: The Children of the Forest capture one of the First Men and stab him through the heart with dragonglass, morphing him into the first White Walker—The Night King.

The theory posits that future Bran, having seen the devastating onset of the Great War, warged himself into this First Man in an attempt to stop White Walkers from ever existing, but his plan ultimately failed because, as the Three-Eyed-Raven solemnly declared, “the ink is dry” and the past cannot be rewritten.

(Another thing to note is that this theory folds into it several others—the first time Bran goes back in time, he does so as the voice that tells the Mad King Aerys to “burn them all.” Bran was talking about the White Walker army, but his approach ended up driving the king mad and causing him to burn his own people instead. The second time, Bran arrives too late and decides instead to inhabit the body of legendary Bran the Builder, who built the Wall in an attempt to keep the White Walkers out. We now know that this plan fails, as well.)

From that point on, Bran is the Night King. Or so the theory goes. Here are 9 reasons this could very well be true:

1. Bran’s Season 6 flashback points to the fact that he warged into the First Man:

During Bran’s flashback to the White Walkers’ creation, the Stark heir watches the events unfold from a distance (no warging here) while his actual physical self winces and clenches his fists, directly mirroring the movements of that First-Man-Turned-Night-King. It’s almost as though Bran is experiencing that pain himself.

Bran’s interaction with Leaf in this scene lends this theory further legitimacy; When he asks her if the Children of the Forest are the ones who created the White Walkers, she replies: “We were at war. We were being slaughtered. Our sacred trees cut down. We needed to defend ourselves.”

When Bran asks who from, Leaf says: “From you.”

2. Bran doesn’t appear in the Season 8 teaser trailer…or does he?

A Season 8 teaser trailer released in January by HBO sees Jon Snow, Sansa Stark, and Arya Stark walking through the crypts of Winterfell—the massive, ancient underground burial place for generations of Starks—as voices of deceased Starks echo out. The trio then comes face-to-face with statues of themselves.

Fans quickly pointed out that there was one remaining Stark notably absent: Bran.

As the Starks peer at the statue versions of themselves, the nearby torch extinguishes. The feather—originally placed in the hand of Lyanna Stark by Robert Baratheon in the pilot episode—frosts over, signifying that Winter Has Come.

Bran Stark isn’t actually missing from the family gathering—he arrives as the frost. Because Brandon Stark is the Night King.

Some fans have posited that the feather, which is the first so-called “victim” of the creeping frost in the teaser, actually symbolizes Bran’s position as the Three-Eyed Raven. Though this could point to Bran perishing in the the coming war on the side of the good guys, it could also mean he’s the leader of that war.

3. The flight of the Night King

In season 4, Bran and his brother Rickon marched with Hodor, Meera, and Jojen towards the giant Weirwood tree to find the Three-Eyed Raven. Bran asks the crow if he can fix his legs, but he says it’s beyond his power. Just as the heartbroken Bran starts to tear up, the crow responds: “You will never walk again, Bran…but you will fly.”

The crow may have just meant that flying is better than walking, or that Bran would have the ability to warg into birds—but many think it foreshadows the Night King, soaring through the sky on a White Walker dragon several episodes later.

Reddit user PeanutButterTongue pointed out how “During Bran’s vision after touching the tree, you can see a reflection of the Night King in what looks to be ice.” He goes on to add: “Bran can possibly be seeing his own reflection. Just like he did previously when he saw his own reflection as a direwolf.”

5. Bran and the Night King look, walk, and dress similarly.

In fact, the Night King’s appearance has changed since the Battle of Hardhome. Some think the newer Night King looks more like Bran, proving that he at some point inhabited the White Walker leaders’ body.

6. The Night King let Jon Snow get away. Twice.

The Night King allowed Jon Snow to escape at the Battle of Hardhome in Season 5, Episode 8, and again in Season 7, Episode 6, when Jon and the gang came back to steal a Wight to take to King’s Landing.

So the Night King had two stare-offs with Jon Snow, and made zero attempt to kill him. Could it be because Bran—no matter how far gone as the Night King—recognizes his half-brother? (Cousin, rather.)

7. The Night King can touch Bran when he wargs

Unlike most of Bran’s visions in which he is an invisible and passive observer, the Night King sees Bran and actually grabs him—leaving a hand-shaped scar on his forearm. As a result of this connection, White Walkers were able to break through the magical barrier in the Children of the Forest’s fortress.

Some fans think the Night King was the only one able to see Bran because he is Bran.

In the first novel of A Song of Ice and Fire series, Catelyn Stark is disturbed by the Stark family words, “Winter Is Coming.”

The words gave her a chill, as they always did. The Stark words. Every noble house had its words. Family mottoes, touchstones, prayers of sorts, they boasted of honor and glory, promised loyalty and truth, swore faith and courage. All but the Starks. Winter is coming, said the Stark words. Not for the first time, she reflected on what a strange people these northerners were.

As Ranker points out, the Starks “are the only family whose motto seems to have nothing to do with their actual family.” So large a diversion certainly has its reasons. Perhaps many of the White Walkers, including the Night King, are Starks—making “Winter Is Coming” a very fitting motto indeed.

9. The White Walker army formed the Stark vigil after the fall of the Wall in the Season 7 finale

The feature-length season finale, “The Dragon and the Wolf” concluded with the Night King’s ice dragon tearing down the Wall at Eastwatch so that his White Walker army could begin their march to Westeros.

Except, inexplicably, the zombie army formed the shape of a direwolf head—the sigil of House Stark.

Some subscribers to this theory predict that Game of Thrones will end with Jon Snow being forced to kill his little brother. Others suggest that if Bran is indeed the Night King, Arya will kill him with the Valerian steel dagger (‘Needle’) that kicked off this entire mess in the first place.

Whether or not Bran Stark ends up actually being the Night King, there’s no doubt he will be instrumental to his downfall. Bittersweet, indeed.