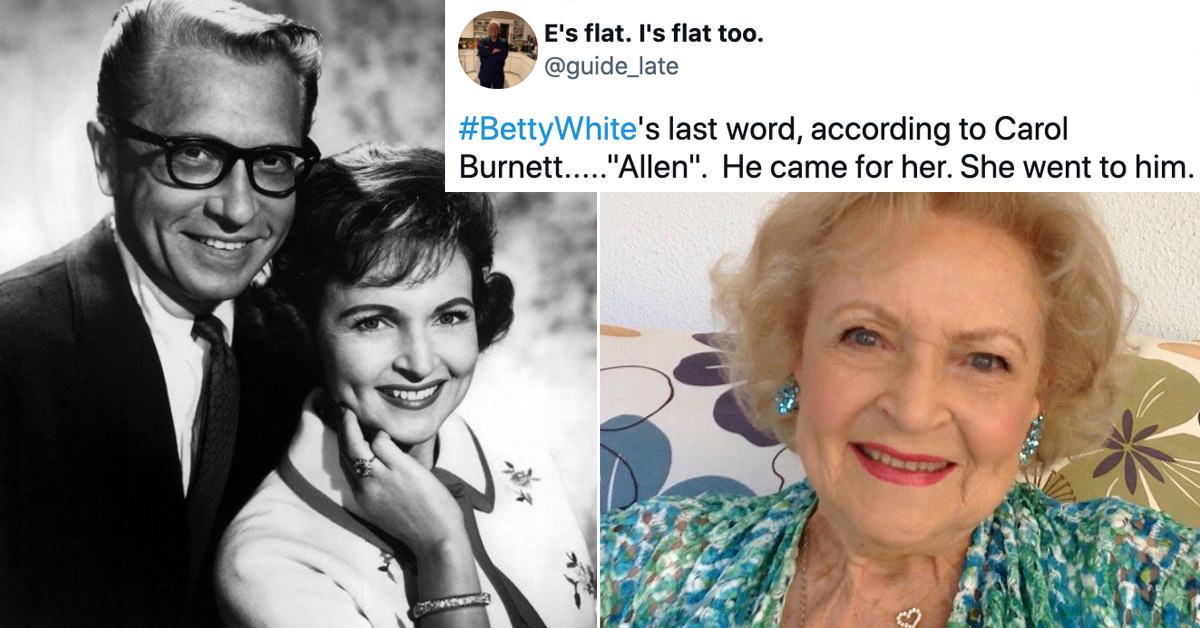 The entire internet appears to be highly emotional over the loss of Betty White.

The legendary actress passed away, just shy of her 100th birthday on December 31, 2021.

Almost immediately, outpourings of love for White began to pour in:

Now, melting the collective hearts and minds of the internet is the revelation that her last word was “Allen”

Allen, of course, refers to her late husband Allen Ludden, according to her personal assistant.

During an interview with The Hollywood Reporter, White’s former co-star and close friend Vicki Lawrence said that the assistant was with her when she died and told Carol Burnett, fellow White friend and co-star on The Carol Burnett Show, about the actress’ final word.

“I talked to Carol yesterday, and we agreed it is so f—ing hard to watch the people you love go away,” said Lawrence. “She said she spoke to Betty’s assistant, who was with her when she passed, and she said the last word out of her mouth was ‘Allen.’ That’s so lovingly sweet. I hope that is true.”

Ludden was White’s third husband and the man she called the love of her life, never remarrying after he passed away from stomach cancer in 1981. She reportedly continued driving the car he gave her and wearing the ring he bought her over the years, and as she grew older, spoke about looking forward to seeing Ludden after death.

White’s death at age 99 came as a surprise to many after publicly saying that she felt lucky to be feeling so healthy at her age just three days prior. However, according to Lawrence, it sounds like she had been declining in health for some time. Public tributes and expressions of grief flooded social media after her death was confirmed by her agent, and the touching news about her reported the last word has people crying all over again as they hoped and wished for the couple’s reunion.