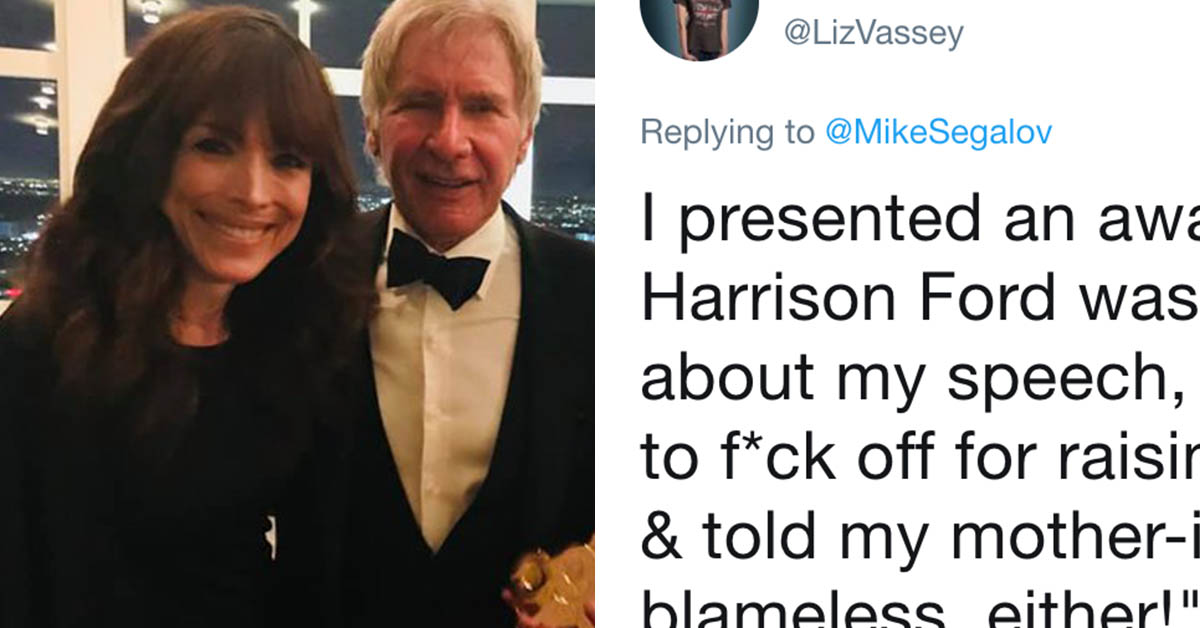 It seems like almost everyone has a celebrity sighting story, but usually, it’s just that — a sighting.

Recently, journalist and filmmaker Michael Segalov asked Twitter users to share the most “surreal encounter they’ve had with someone famous,” and, even shared one of his own — a truly bizarre tale of riding a bucking bronco in Liverpool while Hugh Grant looked at him, stuck his tongue out and shrugged.

what’s the most surreal encounter you’ve had with someone famous? been thinking about this all day… mine was looking up while riding a bucking bronco in Liverpool last year and seeing Hugh Grant looking at me, who then stuck his tongue out and then just shrugged.

People immediately began to send in their surreal stories of seeing celebrities in-person and it’s all too real.

Victoria Beckham backed into me with her Range Rover as I walked by. I fell, but mostly bc of my own clumsiness. When she and David jumped out, she asked if I was okay. I said “I’m fine, I just tripped,” David said “Yeah, because she bloody hit you!” They’re insanely pretty.

When I was a kid, my dad took me to a Black Panther-sponsored talk by Muhammad Ali. We were the only two white people there. Ali shook my hand and said it was nice to see a little white boy there. Never forgot it.

In an elevator. Billy Crystal and Robin Williams get on. Billy sees my press credential and we chat about baseball. I tell him I love Princess Bride. After a second, Robin says, "You don't love any of my fucking movies?" I'm horrified. Then he bursts out laughing. "Got you, pal."

Honestly, we just love how great of a guy Robin Williams was.

In elevator going 2 the doctor, someone throws a hand in as the doors close & it’s Robin Williams. In shock I say “what are YOU doing in my elevator?!” He looks around deadpan – is your name on this? I can buy an elevator? We laugh, he was going to my doc also! Funniest appt ever

Sat next to Ryan Gosling at a Broadway play. Didn’t recognize him until we were chatting at intermission. My face registered that because he laughed & said, “you just figured out who I am”. I nodded. He grinned and said, “Clearly you don’t spend enough time on Pinterest”

I saw Allen Ginsberg splitting an order of strawberry shortcake with his dad at Ratner's deli one midnight in 1967.

In an elevator with Arnold Schwarzenegger and his bodyguards. The elevator stops unexpectedly. There's a pause. Then Arnold jokes that if we were in one of his movies, this is when the terrorists attack, and we're all expendable.

I met Jared Leto at a party, but had no idea who he was initially. I asked him what he did for a living and he confusingly said "I'm Jared Leto". I wasnt sure if he misheard me, or was just an idiot, so I did the polite British thing and just said "oh right" and moved on

Met Quentin Tarantino in Virgin Megastore in 07. Asked him about the WW2 film he said he wanted to make, he rambled for ages about what was going to become Inglorious Bastards but I assumed he was talking rubbish. He also commented quite intensely on my sandals, eeeek.

My friend once met @jackblack in the gas station(?) of a small mountain town. My friend was singing Fat Bottomed Girls, and apparently Jack just jumped right in with him while standing in line. Still crazy jealous of that one.

On set for #GameNight , needed a bottled water, but someone was sitting on the cooler. Like every other mom on the planet, I tapped them on the butt & said "upsey daisy" I lmao (inside) when Jason Bateman got up & turned around with an "Oh, excuse me." 😂

I mistook Morgan Freeman for a friend of my parents when he said hi in a queue at the bank, and spent 10 minutes filling him in on my mum’s health. He was engaged and charming throughout. The teller asked how I knew him; I looked over in shock and he grinned and winked

My daughter & I walked by Maya Angelou at her table on the way to the loo at a quiet hotel restaurant and as we paused, she locked eyes with my cherubic toddler, and said with her distinctive deep voice
“I’ve written a lot of poems in my life but none of them as beautiful as you”

I presented an award to my husband…and Harrison Ford was there. He talked w/me about my speech, jokingly told my husband to f*ck off for raising the bar for all husbands, & told my mother-in-law, "You're not blameless, either!" He couldn't have been nicer & I'm still smiling. pic.twitter.com/mQHqM5aqL7

When I was in high school I saw @serenawilliams in a park in Cincinnati. Her dog got loose and was running towards traffic. I grabbed the pup just in time and brought her back to Serena. She said thanks and gave her autograph. The dog’s name? Jackie. (Same as mine).

Standing on a street corner alone in NYC circa 2007 and looked over to see Mike Myers next to me. At that moment, an acquaintance drives by, leans out the window, points at me, and yells my name. If I’d been quicker, I would’ve quipped a/b being famous. Instead I was just 😯

I walked past Angelina Jolie in the bread aisle of a grocery store a couple months back. She was chatting with the woman she was with, and as I walked by, I heard her say “no, they won’t eat whole grain. Trust me, I’ve tried.”

I once met and interviewed Nelson Mandela in his house in Jo’berg and halfway through my one to one twenty minute interview he put off the president’s phone call to answer the rest of my questions. True egalitarian. I was no one to him but he made quality time to speak with me. pic.twitter.com/jkyCrd0uIY