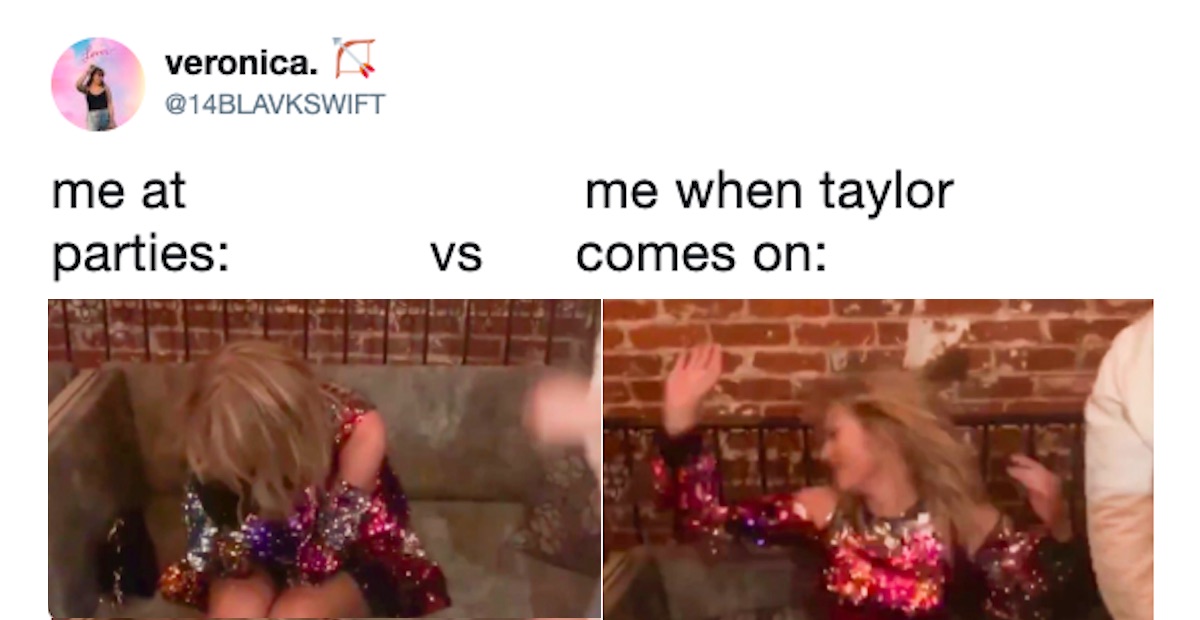 Taylor Swift has had many public personas, but even when she’s presenting herself as a man-stealing badass who jumps out of windows, she still comes off as pretty strait-laced. She is in control of her image, always. That may be why this video of her bouncing around like a sophomore on Spring break has captured the Internet’s heart so completely. Drunk Taylor is a revelation.

The video came from a night of revelry hosted by Swift on Saturday in celebration of her ten VMA nominations. Everyone in the cast of her music videos for “ME!” and “You Need to Calm Down” was invited, so it was a quite a party. Swift was filmed dancing to her own song like she’s her own biggest fan. She isn’t actually drinking, but anyone who has ever been drunk might find these moves recognizable:

I really feel like drunk Taylor compliments all the other girls in the bathroom pic.twitter.com/vtLZUXZffq

It seems like Swift finds the whole thing funny. At least, she wants to take control of the narrative as usual.

She joked about it on Twitter, sharing pics from the party about what a fun time she had and the fact that “Drunk Taylor” was trending.

Threw a party to celebrate with the people who made the ME! & YNTCD videos with me- and we had so much fun that ‘Drunk Taylor’ is trending on Twitter. CHEERS. 😆🍾👍👏 pic.twitter.com/HPvQlSDSBM

Memes are all about relatable content, and nothing is more relatable than making a fool of yourself dancing to a Taylor Swift song.

Hang over Taylor looking at all the Drunk Taylor tweets in the morning. pic.twitter.com/AKhNViBE1o

taylor how many holes are in the fence? pic.twitter.com/n9VxrVuxue

I have two moods at parties only pic.twitter.com/s2MKuudldh

taylor how many grammy do you own? pic.twitter.com/iBmt5y3zb3

joe when taylors drunk ass rolls in the house at 4am apologising to the furniture she just bumped into pic.twitter.com/cyZs0AUTYn

taylor waking up hungover and realizing she has to get up and go to the teen choice awards coz they made up an award for her so she had to attend pic.twitter.com/K6cLlcde1h

me at me when taylor
parties: vs comes on: pic.twitter.com/HqoVjnunBD