Being an influencer is a hard life. You have to create and manage a ton of content while trying to interact with your followers. One might say the only harder life would be working any actual job. Who knows, maybe it’s harder than it looks.

These influencers really proved their entitlement when they requested (some even demanded) free services from businesses in exchange for “promoting” them on their page. While it might sound like a decent gig on both sides, exposure doesn’t pay anyone’s bills. A business can’t pay their employees in influencer likes and follows. Truly, the only person who benefits from this is the influencer.

Businesses that stand up to these kinds of offensive offers are heroes in my book.

1. Not worthy of a response. 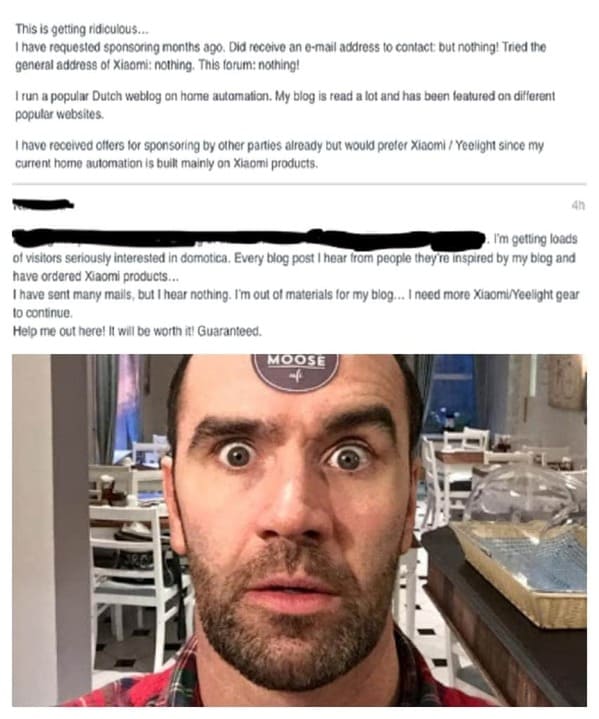 Business owners spend some of their days sifting through emails of influencers asking for free stuff. It’s a mess. This influencer was hoping toc score some free tech products just for being an influencer. They didn’t even reply. He definitely wasn’t worth their time. 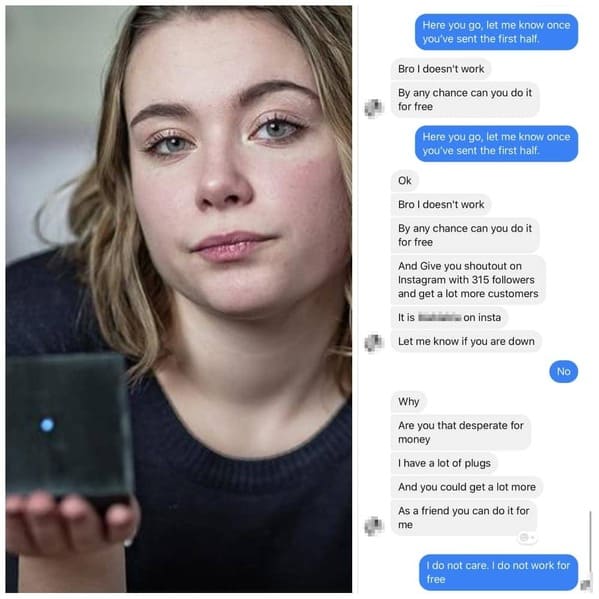 The base factor of being an influencer is that you have people to influence, aka followers. This woman only had 315 followers and thought she could get this company “a lot more customers.” I’m glad they responded and said they don’t work for free. 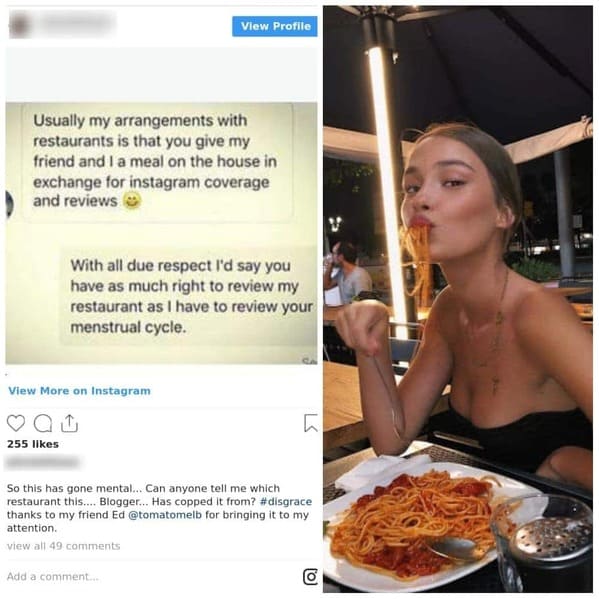 Influencers will frequently try to mention previous brand deals they’ve had in order to gain leverage and get what they want from a company. This restaurant was quick to note that she wasn’t even a restaurant critic, yet wanted to review the restaurant’s food.

4. What a horrible deal. 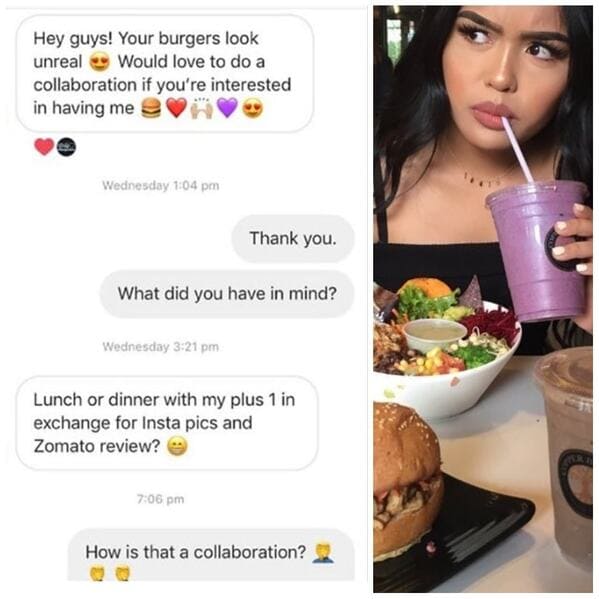 Normally, influencers work with companies by sending the influencer products which they review on their social media sites. However, the deal has to be good for both sides. This influencer was definitely just trying to get some free burgers for her and her friend. 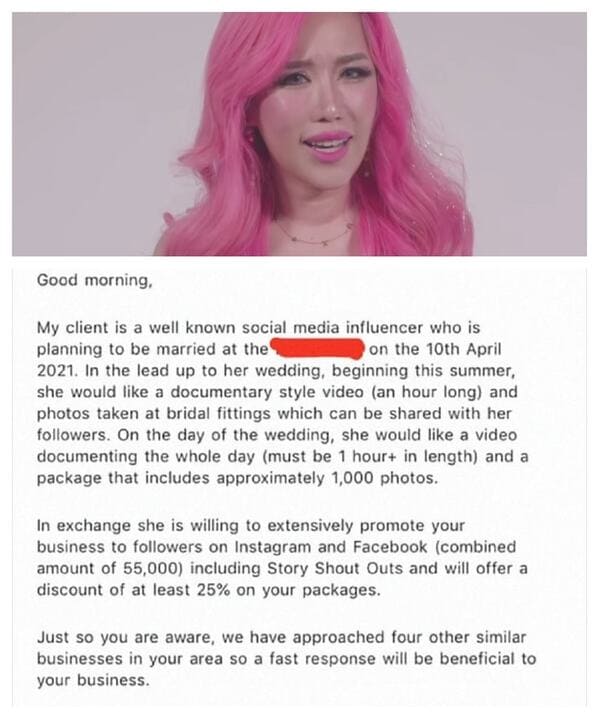 Wedding photography and videography isn’t cheap because it takes loads of talent, time, and because you really only get one shot to get it right. Not only did this influencer want a free wedding package, but they also suggested giving followers a discount of more than 25% to their followers. Last but not least, they tried to rush the business by saying they were approached by other companies. I really doubt that. 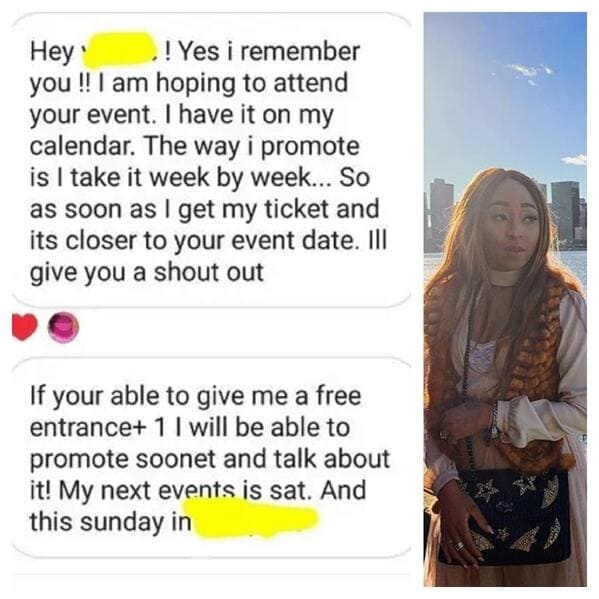 Influencers love concerts and festivals because it makes interesting content followers really enjoy. What really upset the organizer of this event was that 70% of profits go to a charity to end homelessness. Asking for a free ticket was insensitive and selfish of her. I hope they absolutely dunked on her. 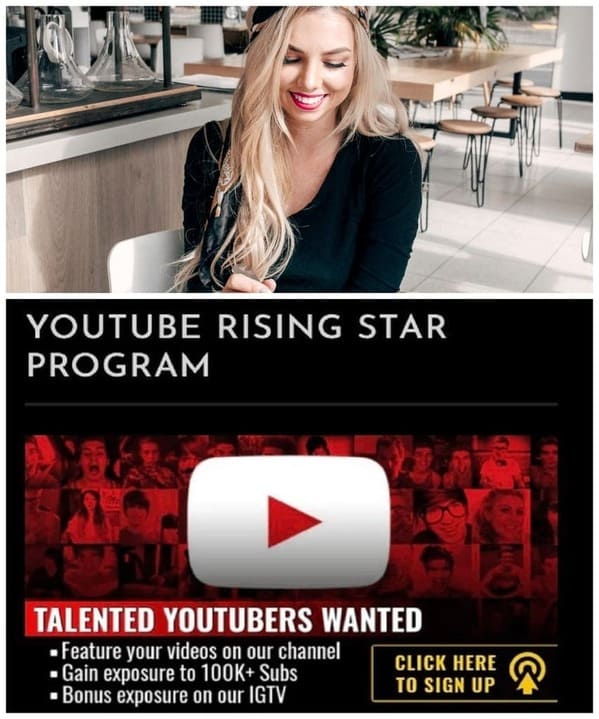 YouTubers make a ton of money if they have enough subscribers, which is probably why this company was looking for a free “rising star.” In return for making money for them, this Youtuber would be paid in exposure. Seems like a pretty bad deal to me. 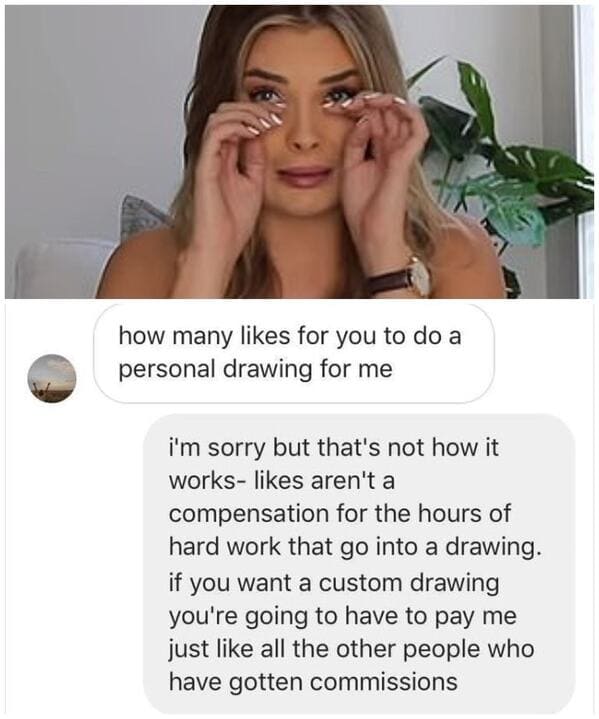 Artists can pay their bills because they put a lot of hard work into the things they create and people pay them for it. It’s really rude when influencers ask for free stuff from them. Likes don’t pay the bills, honey. 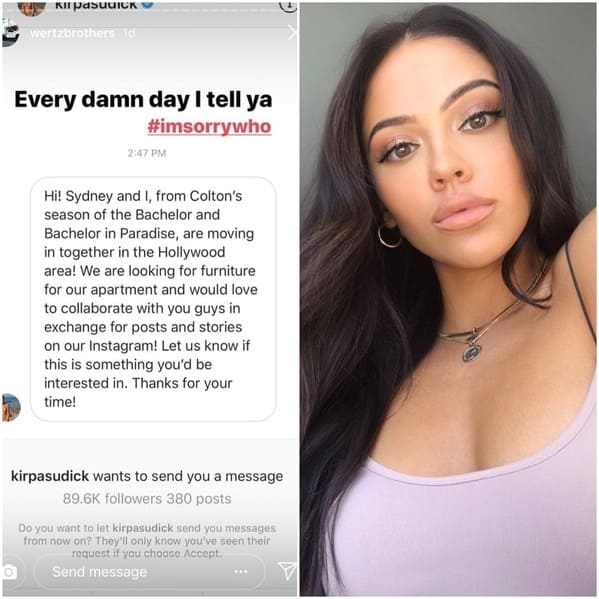 Many people who go on reality TV shows become famous afterward and maintain a large following. This person from The Bachelor and The Bachelor in Paradise asked for free furniture in exchange for posts and stories. Furniture is crazy expensive so this is definitely asking a lot. 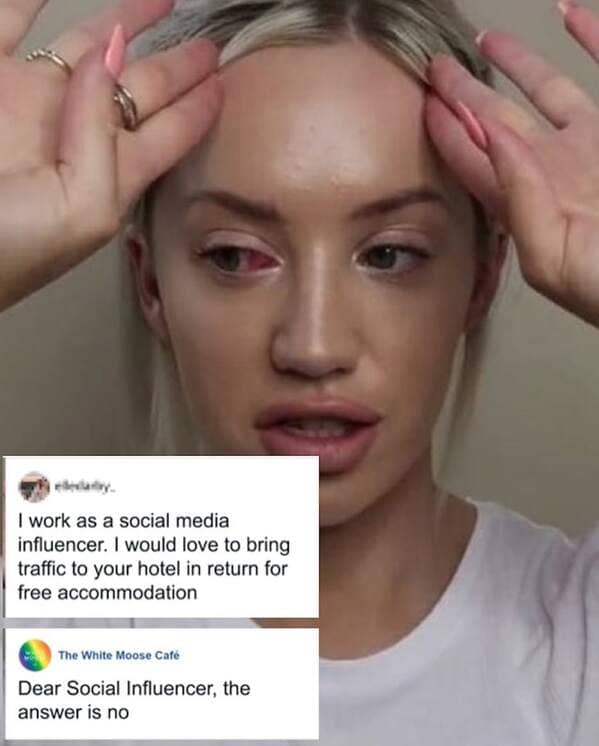 11. Not everything is negotiable. 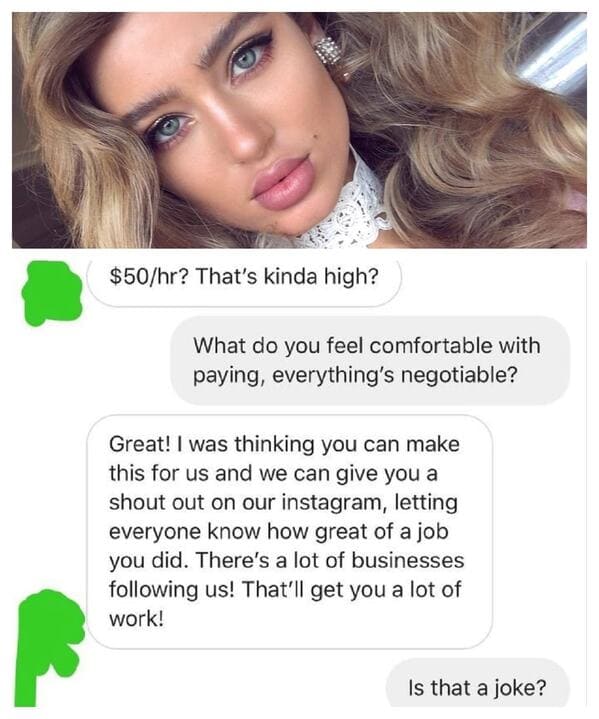 I’m not surprised that this company thought this influencer was making a joke. This influencer wanted this marketing agency to do a coding project for her and then was upset when the fee was so high. This kind of project would probably take 2-6 months to complete. 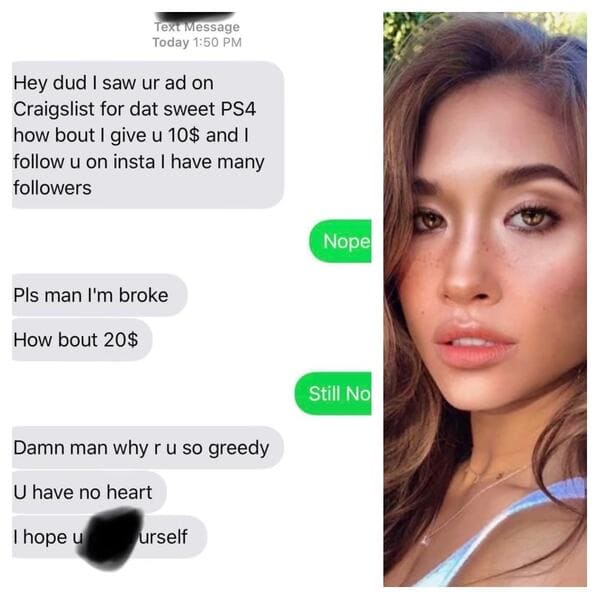 This influencer clearly thought that their follower count could translate into the real world when they tried to buy a PS4 on craigslist. They didn’t even offer anything besides a follow. Pretty lousy deal if you ask me.

13. This is how we collaborate. 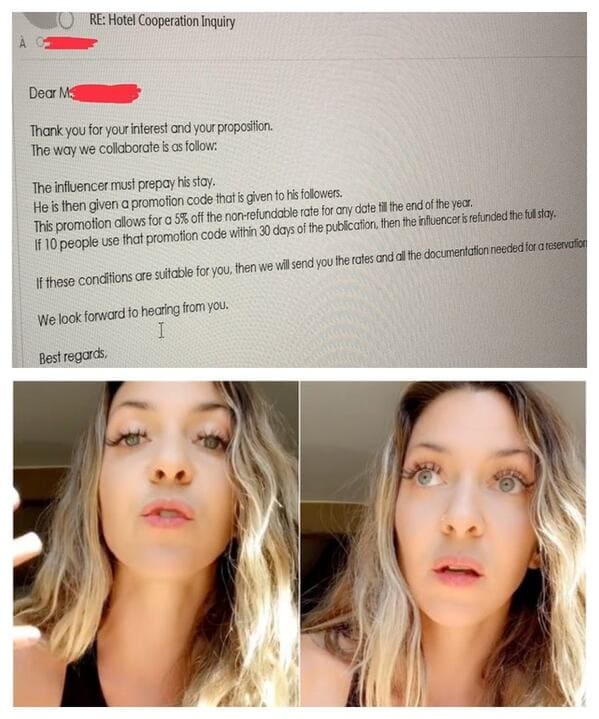 Tons of influencers travel the world for their job and get free lodging and meals where they go and many other people assume they will get the same treatment because of it. This influencer asked for a free stay at a hotel and the hotel came back with their own offer. If she was really going to get them so much business, she was welcome to get a discount in return. 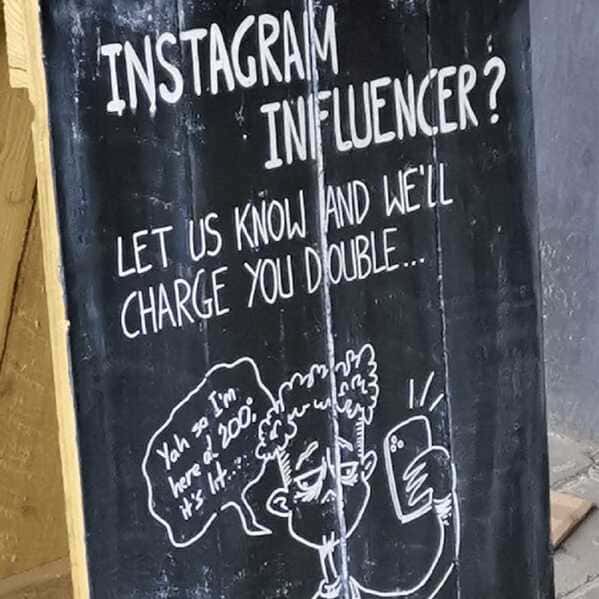 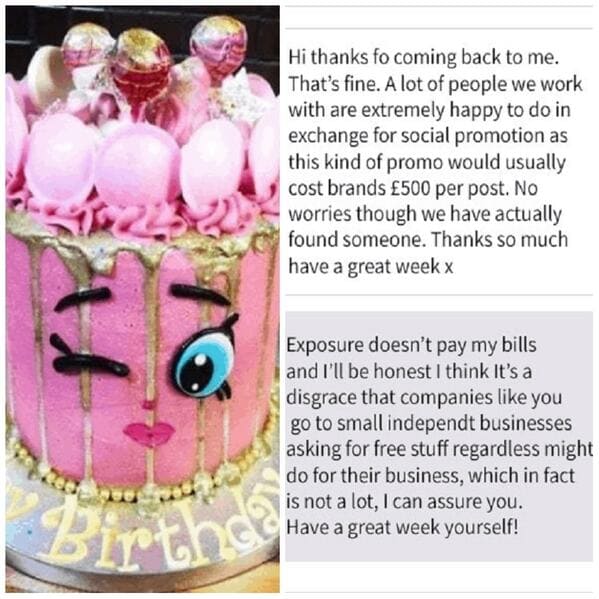 While some exposure might gain a business a few sales, the labor they put into creating the product will probably offset the gain. While this influencer has noted that “a lot of people we work with” are happy to do the work for free, this independent business owner was quick to point out that “exposure doesn’t pay my bills.” 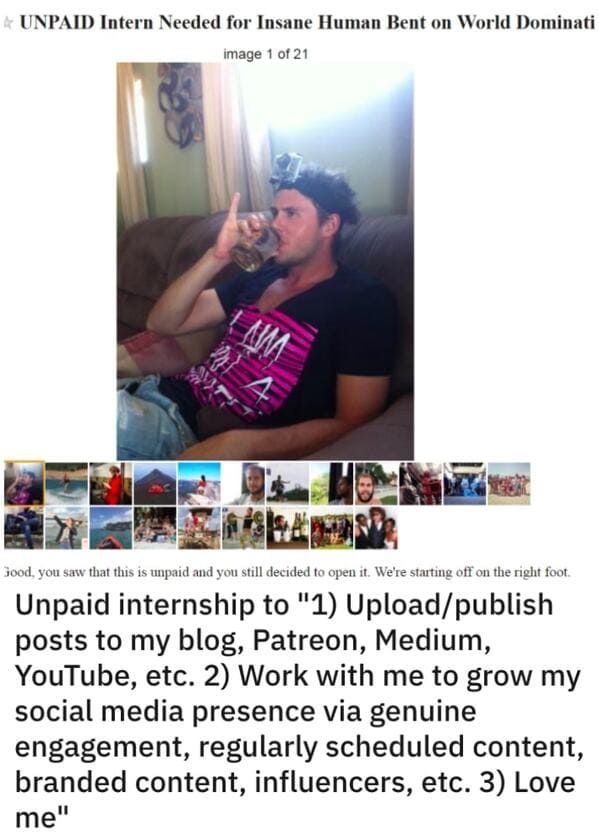 This influencer tried to hire someone to do most of their work for them while not even paying them. Content creation and management are usually two separate jobs that can pay really well. This influencer also had the charm to say they must “love him.” How pleasant. 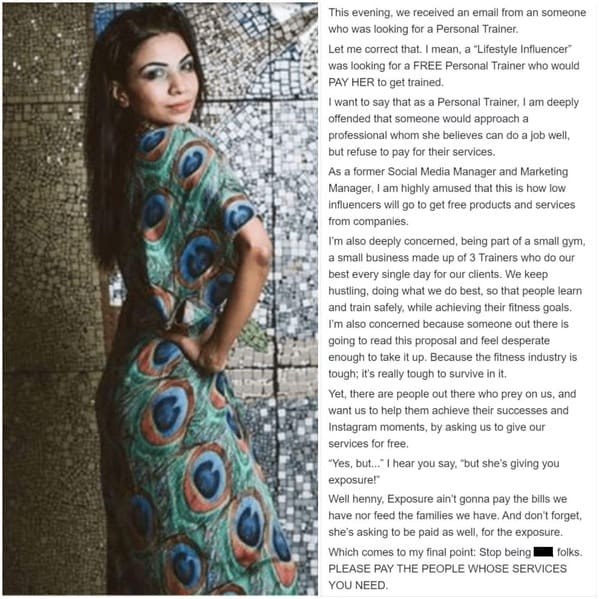 This gym owner was offended when an influencer refused to pay for the services and expected high-quality treatment. The influencer even expected the personal trainer to pay her for the promotion. Yikes. 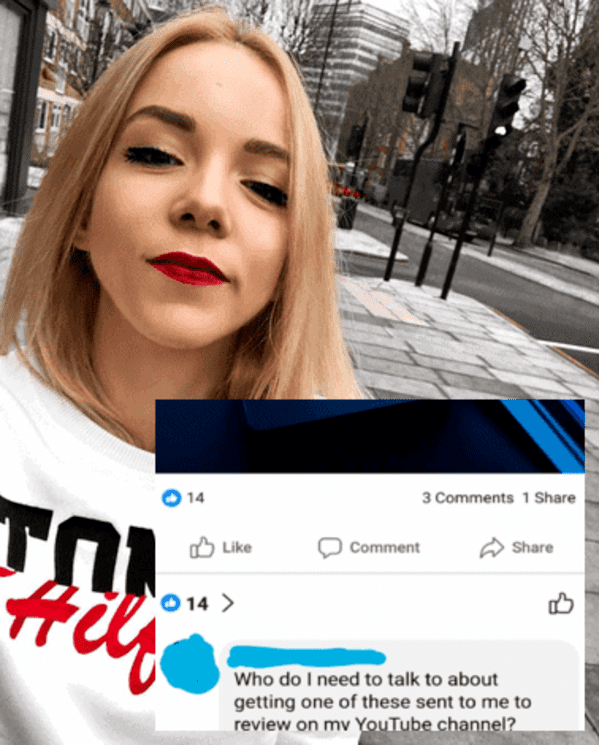 Everyone wants to be a YouTube star nowadays. This influencer tried to get a Stream Deck Mini for free. Unfortunately for them, the company could see they only had 40 subscribers. That’s probably a no. 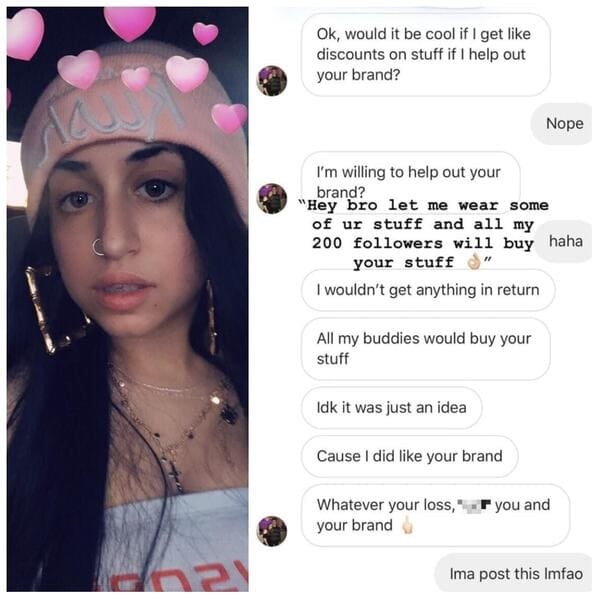 This woman only had 200 followers but she still thought the company might want to send her free stuff. Shocking. 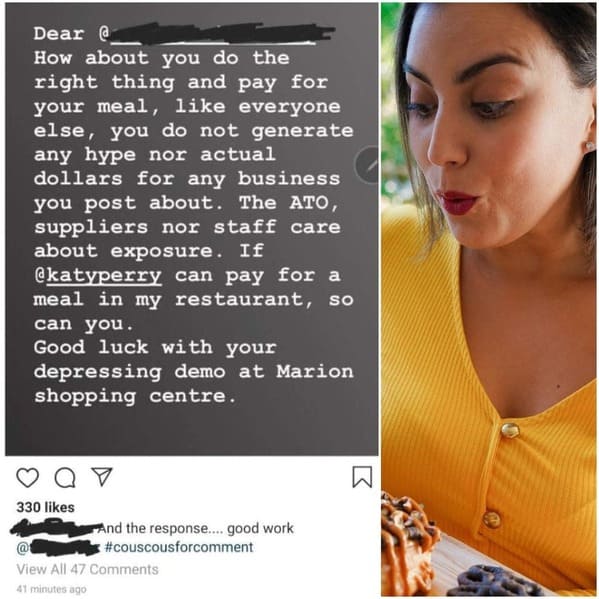 This restaurant decided to call out an influencer who asked for a free meal, saying other influencing had no effect on their business. If celebrities can pay for their own meals, so can everyone else. 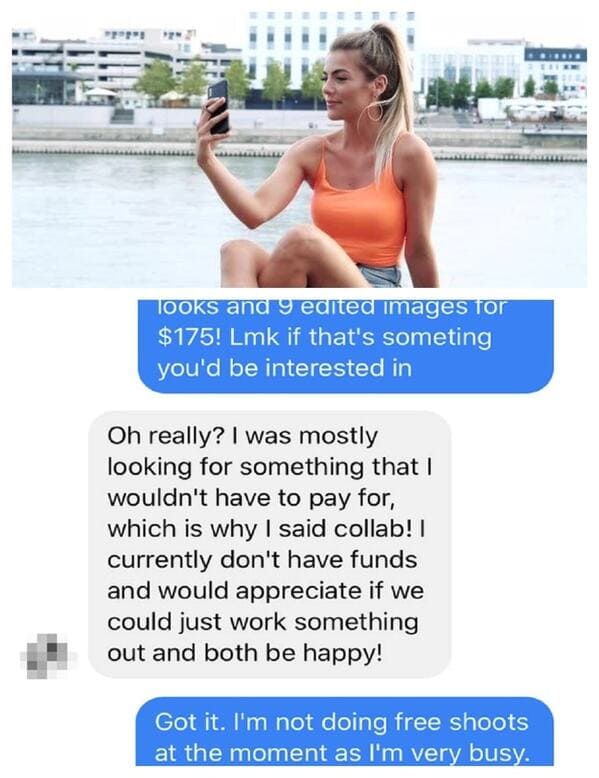 When this influencer said they could “work something out and both be happy,” that means she gets the service for free. She later asked if they would even pay her to do the shoot instead of the other way around. Classy. 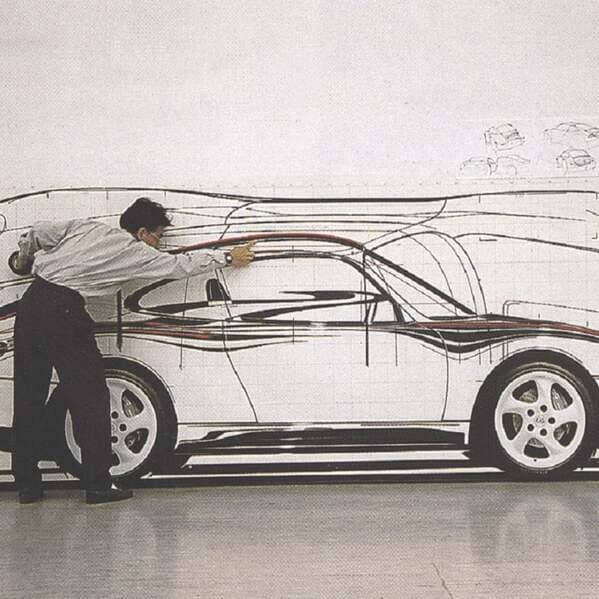 This automotive owner got more and more annoyed as influencers continued to ask for free cars. It’s one thing to try and get a free meal. A car? That is just absurd. 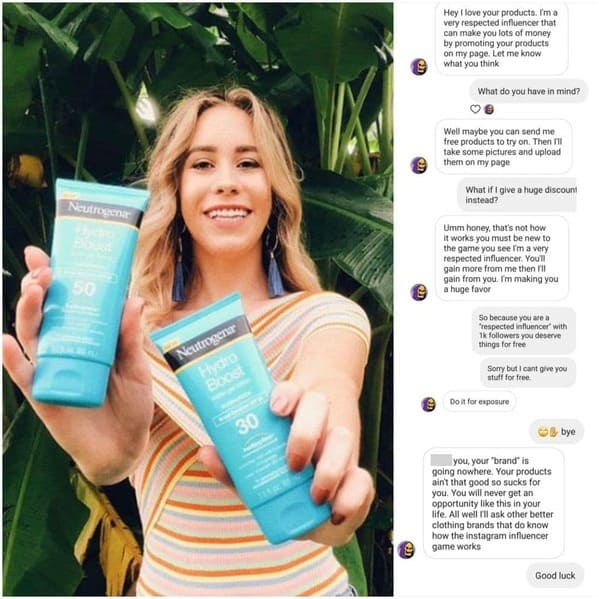 This company offered a huge discount on their products for someone who only has a thousand followers. Honestly, that’s a really generous offer. Glad they denied the influencers demand for free products since she was so rude to them. 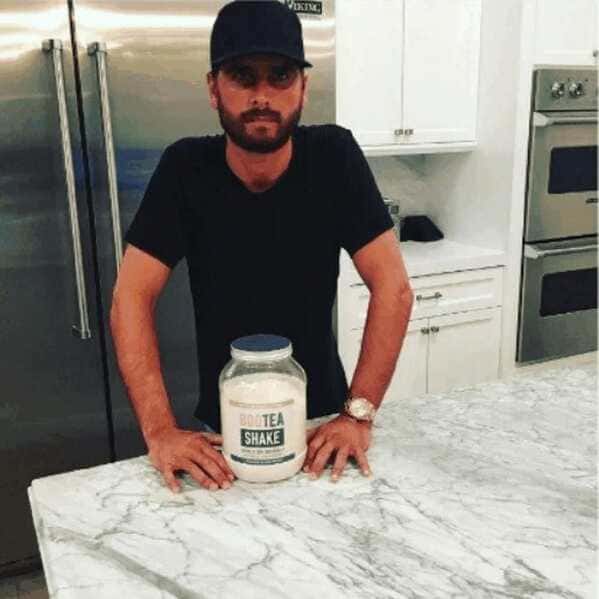 Tons of celebrities on social media sign up for brand deals and usually, both parties benefit from it. Scott Disick paired up with a protein shake company who sent him detailed instructions on what to post. In an effort to do the bare minimum and still get paid, he just copied and pasted their entire email including the part that said, “here is your caption.” 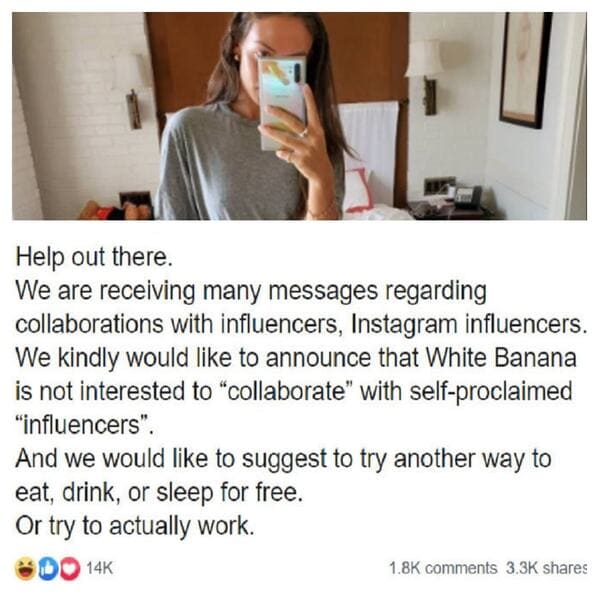 A company called “White Banana” posted an update saying they were not interested in working with influencers to give them free stuff. Looks like they had been burned a few too many times. 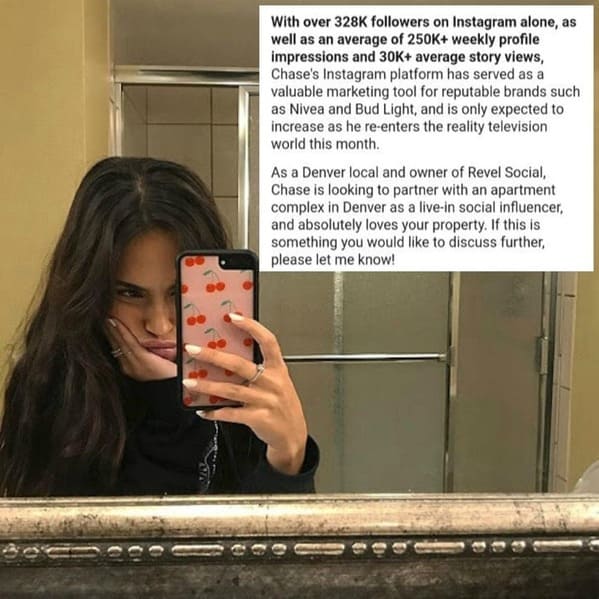 Chase McNeary was a season 20 runner-up on The Bachelorette and he quickly gained a large following on Instagram. His agent tried to leverage this fame to get him a free apartment. They even suggested he be a “live-in influencer.” 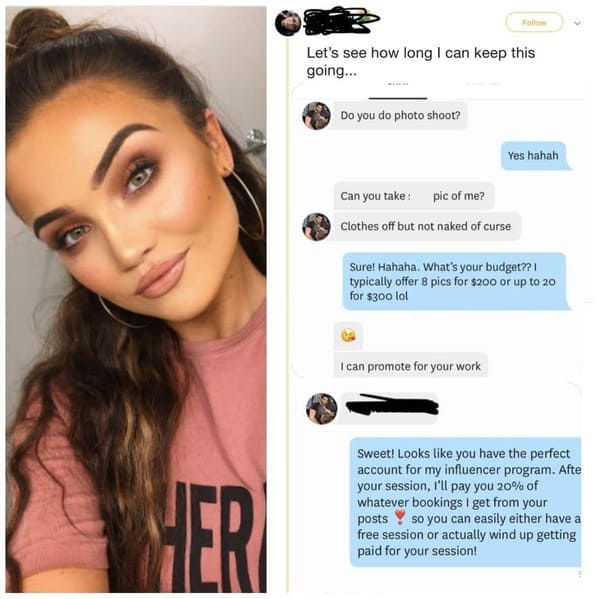 Why do influencers think they can get things for free? The whole behavior is absolutely insane. This photographer knew that they wouldn’t actually get any business from this woman’s post so they decided to mess with her a little about it. 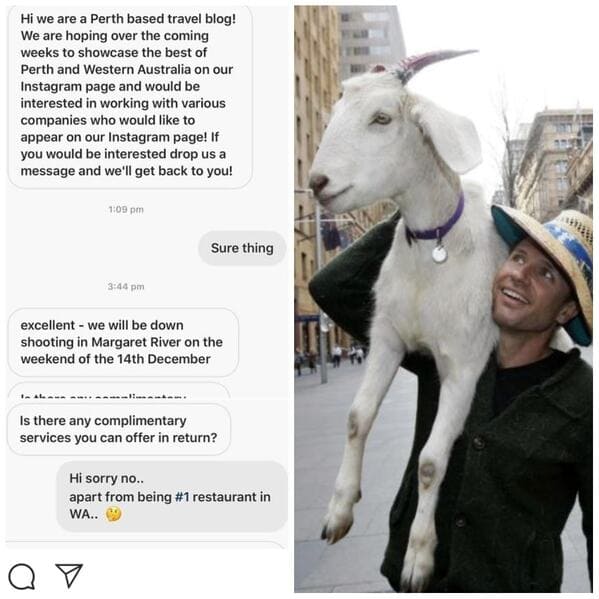 This travel blogger approached this restaurant in Western Australia asking for free food and publicity. He ended up still going to the restaurant and leaving them positive reviews, as a real travel blogger should do. 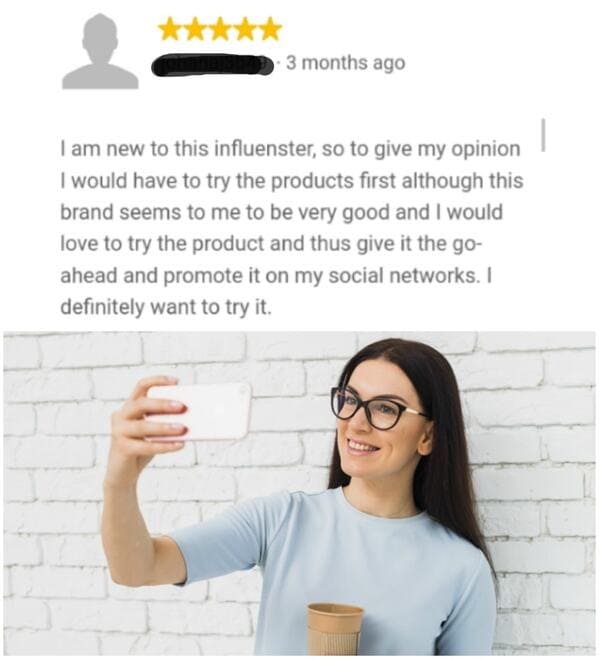 Many companies rely on positive reviews to stay afloat. However, this influencer didn’t even spell check their offer to the company. Not exactly off to a good start. 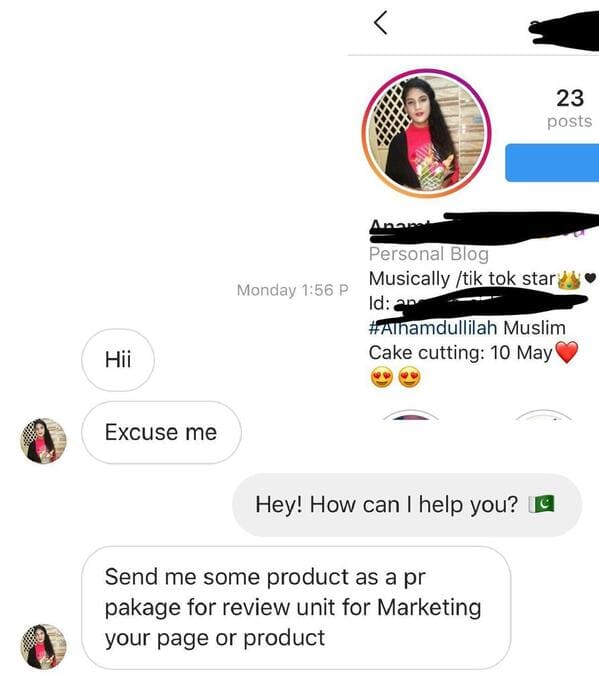 This influencer started out without a pitch or an offer, simply saying “Hi. Excuse me.” Not a great way to introduce yourself. She also definitely didn’t ask nicely and instead demanded a pr package to review. I’m sure that company happily declined.