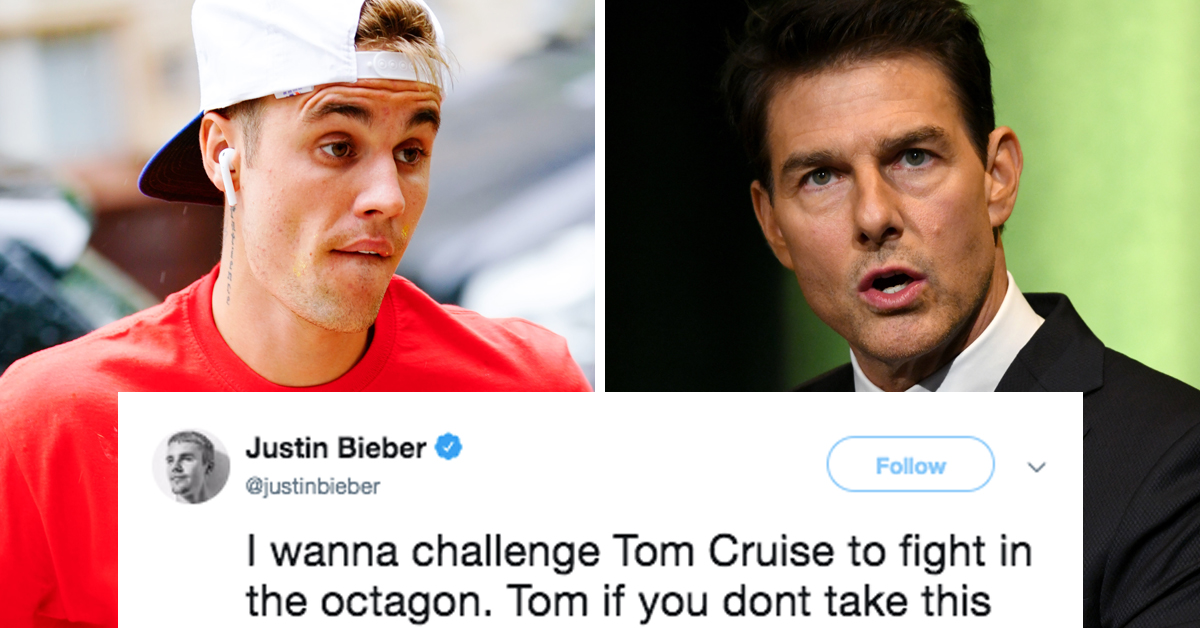 Well, if you were hoping to start the week off with a weird celebrity feud that makes absolutely no sense, you’re in luck, because Justin Bieber just challenged Tom Cruise to a UFC fight. Yes, really. No, we don’t know why, either.

Bieber, 25, tweeted on Sunday night, “I wanna challenge Tom Cruise to fight in the octagon. Tom if you dont take this fight your (sic) scared and you will never live it down. Who is willing to put on the fight? @danawhite?”

I wanna challenge Tom Cruise to fight in the octagon. Tom if you dont take this fight your scared and you will never live it down. Who is willing to put on the fight? @danawhite ?

Ummmm, okay. Weird doesn’t even begin to cover it.

If Tom Cruise is man enough to accept this challenge,
McGregor Sports and Entertainment will host the bout.
Does Cruise have the sprouts to fight, like he does in the movies?
Stay tuned to find out! https://t.co/TxsH9KUyFg

Cruise hasn’t yet replied, via Twitter or anywhere else. But lots of other people have.

I am willing to put on this fight. We live on a pretty dead street and I bet we could easily throw up some sawhorses to block traffic for a couple hours. We also have an octagon from when my wife and I used to UFC fight each other during our courtship. https://t.co/jaMLASsPFD

Jake Marsh, who has a comedy-sports podcast called Pardon My Take, provided a rundown for the fight he dubbed “Cruisin’ For A Bruisin’.” (Nice.)

Tale of the Tape: "Cruisin’ For A Bruisin'"

And there were tons of jokes.

The celebrity version of DEBATE ME YOU COWARD is lit. https://t.co/Jca6qdQGg2

i’m constantly threatening to fight 50 year old men you are NOT special https://t.co/ta0UAjIbGO

Me: I am morally against MMA and cannot support the "sport" in any way.

The Biebs must’ve seen a Scientology documentary & now he’s out for that catholic revenge. https://t.co/R5aV3lnF98

And Kevin Smith had a few tips for the Biebs.

You wanna control Cruise in this match? 1) Don’t fight him on a couch: he can be bouncy. 2) Make sure you’re fighting the actual Tom Cruise, because he’s king of impossible rubber mask reveals. 3) If he slides into the Octagon in Wayfarers and undies, go for his parents’ Porsche. https://t.co/mWdyeUiLQW

As for who would win, well, a lot of people are putting their money on Cruise.

Me running to Twitter to make sure no one actually thinks Tom Cruise would lose in a fight to Justin Bieber… pic.twitter.com/mvhyywwk9C

Bieber's getting his ass beat https://t.co/ISGS9LtKkF

More information on this compelling story as it develops.