The first member of the KarJenner clan has unfollowed Tristan Thompson and Jordyn Woods on Instagram—and that member is the Queen herself, Kim Kardashian.

A quick recap, in case you haven’t yet heard the news: Khloé Kardashian officially split from her baby daddy NBA star Tristan Thompson after it was reported that he’d cheated on her with Kylie Jenner’s BFF, Jordyn Woods.

Though those involved have yet to officially address the cheating rumors (besides Thompson, who simply tweeted, then deleted the words “FAKE NEWS”), Khloé has been writing Instagram comments that seem to confirm the rumors, as has her best friend Malika Haqq. 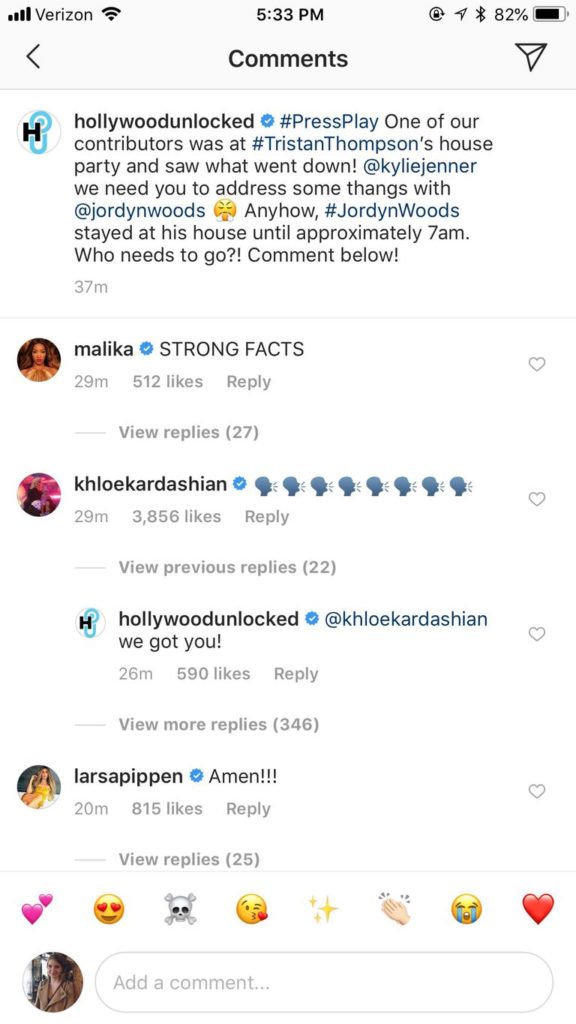 Now, Kim Kardashian has become the first member of the family to unfollow both Thompson and Woods. (She had already blocked, then unblocked, the basketball player over the summer after news came out that he cheated on Khloé the first time.)

But she wasn’t the only member of the squad to reveal her allegiances on social media. Kourtney Kardashian and Malika Haqq also unfollowed Woods—overnight it seems, considering writer Mariah Smith noticed they had been following just last night.

All of the Kardashians and Malika still follow jordyn on insta! pic.twitter.com/dAY88WAwMh

According to People, none of the Kardashians initially wanted to believed the allegations. “When they first started hearing on Monday that Tristan made out with Jordyn, no one really believed it,” an anonymous source told the magazine. “That Tristan would be inappropriate, yes everyone knows that he can’t behave, but that Jordyn would make out with him, it first seemed like a made up rumor.”

“It wasn’t anything they wanted to drop. So several family members reached out to people they believed had been at the party. And they were told it was true.”

We expected the Kardashian sisters to drop Woods like a hot potato, but Kylie Jenner—who is surely struggling with her longtime best friend’s betrayal of her own sister—has a far greater dilemma to contend with. We await her next move with impatience.