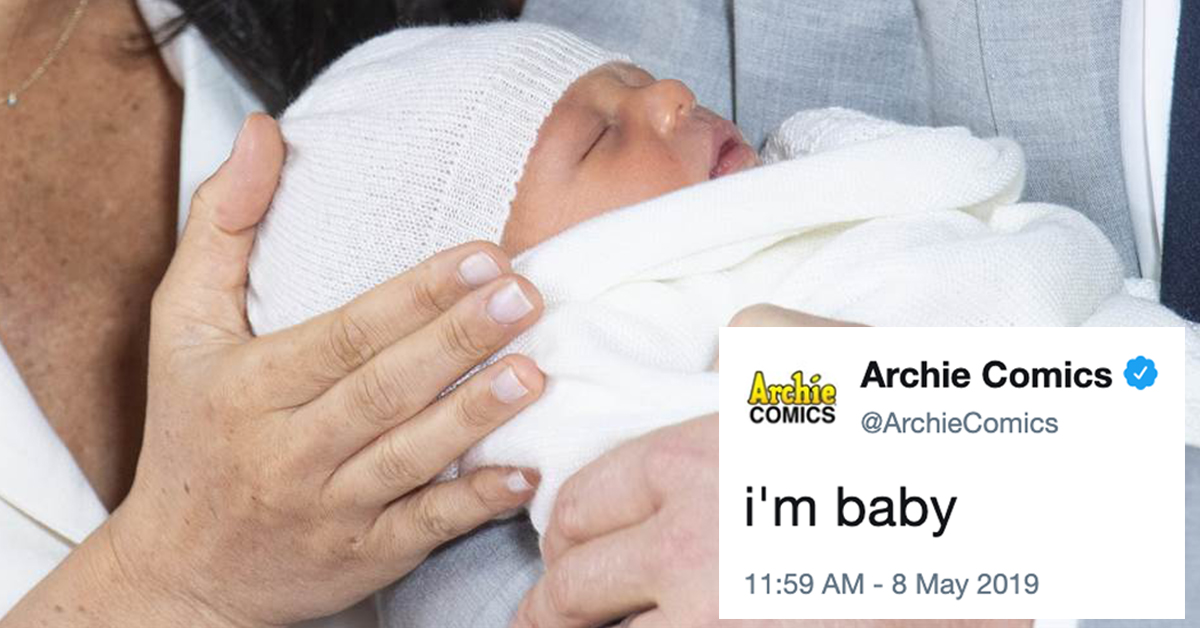 The Duke and Duchess of Sussex have blessed us with the first glimpse of their son, who was born on Monday at 5:26am, weighs a healthy 7 pounds 3 oz, and is seventh in line to the throne.

Meghan said the baby “has the sweetest temperament, he’s really calm. He’s been the dream.” Prince Harry added, with a laugh, “I don’t know who he gets that from.”

The Duke and Duchess of Sussex with their baby son, who was born on Monday morning, during a photocall in St George's Hall at Windsor Castle in Berkshire.

“It’s magic, it’s pretty amazing. I have the two best guys in the world so I’m really happy,” said the former Suits actress.

Meghan and Harry's #royalbaby makes his first appearance! "I have the two best guys in the world, so I'm really happy," says the Duchess of Sussex https://t.co/Qlt4LS1PgR pic.twitter.com/WaByMftOFS

The Duke of Sussex also said that his baby son’s looks are already changing, just two days after birth.

“Parenting is amazing,” said Prince Harry. “But we’re just so thrilled to have our own bundle of joy and to spend precious time with him as he slowly, slowly starts to grow up.”

“His looks are changing every single day,” said Harry. “He’s already got a bit of facial hair!”

The couple initially didn’t announce the child’s name, fueling speculation on social media. The Telegraph reported that Alexander and Spencer were among the favorites with bookies, closely followed by Arthur, but those seemed too plain in light of reports that Prince Harry and Meghan Markle were “leaning towards a royal baby name that pays tribute to both US and UK history.”

Mere hours after the family’s first appearance as a trio, the name of the newest member of the royal family was finally revealed: Archie Harrison Mountbatten-Windsor.

Reactions on Twitter were swift. Jokes abounded. Riverdale and Archie comic book references were made by many, including a perfect tweet penned by the official Archie Comics account.

Archie Harrison walking into the royal parties with his unique name to greet his cousins that all share the same five names pic.twitter.com/Vd9OzxHBYT

me inviting myself to Meghan‘s house tryina get her to change the name Archie Harrison Mountbatten-Windsor to Jamal Markle pic.twitter.com/NNMm3zOCqP

Archie arriving to the royal family gathering with his 25% African-American https://t.co/bOYRFHmlU3

Archie Harrison Mountbatten-Windsor made fun of my schooner in front of the whole regatta.

a shame you can't hear Her Majesty's pitch perfect impression of Edith Bunker as she coos "Oooh Archie" in a Queens accent https://t.co/wuyDukqBwU

This could be the first photo of Prince Archie but equally it could just be a foot long sub in some muslin pic.twitter.com/fiCKeEMEJX

And many insisted that even though Archie is not technically a ‘prince,’ he is still the prince of our hearts.