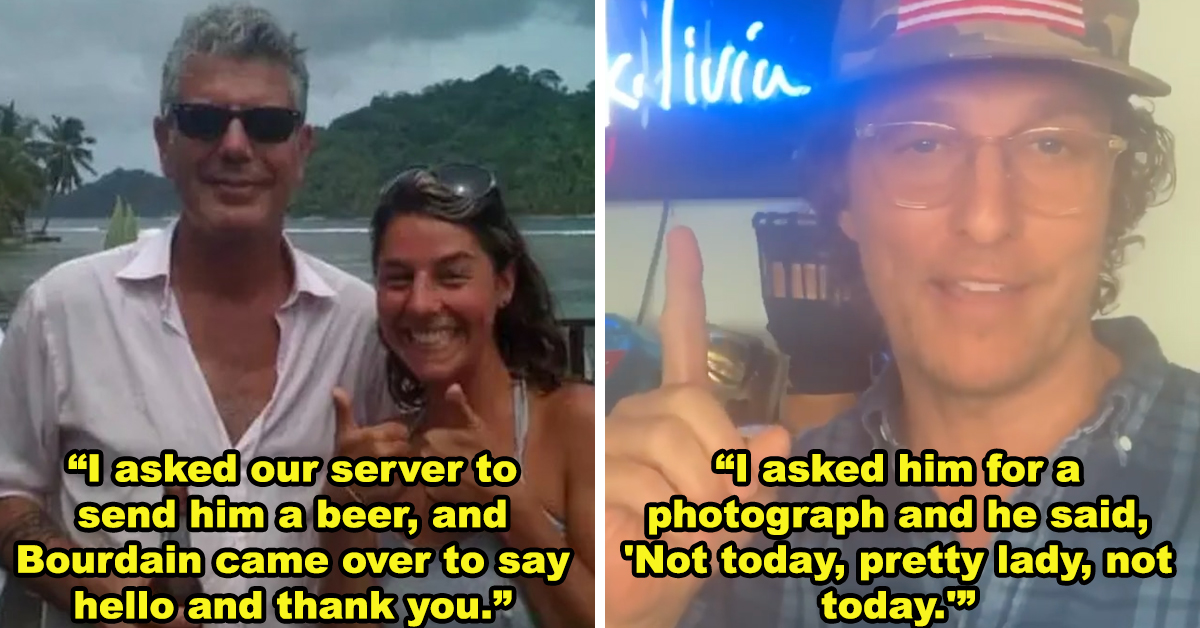 Buzzfeed writer Lauren Yapalater recently asked the BuzzFeed community about memorable encounters with celebrities and she got a whole slew of absolutely adorable, sweet, wholesome stories in response. Enjoy!

“My friends and I saw Christopher Meloni at a brewery in Cincinnati. When we asked for a picture, I awkwardly tried to give my phone to one of his companions. He said, ‘Here, let me, this is called a selfie,” and took a perfect picture of our group!”

“I met Jack Black, and somehow we ended up discussing yogurt and granola while still shaking hands.”

“Met Beanie Feldstein outside a 5-star hotel in Paris almost two years ago. Was already a huge fan of hers back then and freaked out when I saw her. We talked for at least five minutes about Booksmart, which had just came out, and why she was in Paris (Fashion Week). When she asked for my name, I told her that my name was Jonah, which was a name I chose because I was also a fan of her brother Jonah Hill, to which she replied, ‘That’s so cool!’ She was an absolute sweetheart!”

“I went to a con and caught an elevator one day to get to a panel on another floor. I was in a wheelchair. When the elevator opened its doors, there was Jason Momoa! He was a sweetheart and insisted on pulling me in. He also insisted on pushing me out on my floor, even though he was heading for an entirely different floor, and took a picture with me. Great guy, very sweet and funny, and BTW, HUGE.”

“I sat by James Earl Jones on a plane when I was a little kid. He was so nice. I asked him to say famous lines from the Star Wars movie, and he happily obliged. At the end of the trip, he shook my little hand and said, ‘May the Force be with you!’ What a kind gentleman.”

“I met Anthony Bourdain when I was traveling in Panama and he was filming a segment for his show No Reservations. I asked our server to send him a beer, and Bourdain came over to say hello and thank you. I got to gush to him about how I was using his book as part of my senior thesis. He was very nice about it and took my fangirling in stride, even though you could see he’d kind of been hoping to not be recognized, as we were in a pretty remote area in a small restaurant. RIP, Anthony Bourdain.”

“I ran into Matthew McConaughey at a restaurant in Austin. I asked him for a photograph and he said, ‘Not today, pretty lady, not today.’ Not even mad! Still swooning over the fact that he called me pretty 20 years later!! Ha!”

“I cooked with Guy Fieri when he opened a restaurant (Joey Fatone from NSYNC was also there) as part of my all-costs-paid family trip from a dream organization due to my autoimmune disease (similar to Make-a-Wish, but for kids who have things other than cancer).

“He was super sweet, signed my autograph book, and wrote a message to me in his cookbook, which he gave to me for free. (I was 9 at the time and a huge foodie, and it was so cool to meet him.)

“I used to have pictures of us cooking together in my locker at school, and people would always come to look at them, and some said it wasn’t real because they didn’t believe me.”

“In the late 1990s, I was an angst-ridden preteen traveling through Europe with my family when we checked into the Hilton in Rome. Upon checking in, we were told we couldn’t speak to a blonde American actress if we saw her. Which was just a strange thing to tell kids.

“There was some sort of terror attack at an embassy, so Americans were told they had to stay in the hotel (bye-bye, catacombs tour). My brothers and I spent a few days goofing around at the pool making three young guys laugh, mowing down cheesy pasta, and chatting them up. Turns out those three guys were Matt Damon, Philip Seymour Hoffman, and Jude Law, and they were taking a break from filming The Talented Mr Ripley. Such nice guys.

“The blonde actress we were instructed to ignore was Gwyneth Paltrow.”

“Back in 2016, I was working alumni week at a retail store for a small Ivy League college in my state. I saw a very pretty, casually dressed woman shopping who I thought looked like Connie Britton. She ended up checking out at my register, and I of course was a little too introverted to pay her the compliment of telling her she looked like Connie Britton…until her credit card confirmed that she was, indeed, Connie Britton. I stayed calm and polite (and quiet, because it was busy and I wasn’t gonna blow up her spot) and acknowledged that the reason I thought she looked like Connie Britton was that she was. She chuckled and said she graduated from that particular college, and I said it was very nice to meet her. She is just as gorgeous in person as onscreen and seems like a really nice, normal person.”

“I came into the New Orleans Airport on a really late flight. I had to stop and charge my phone once I got off, so I was one of the last people to walk out. As I was walking to baggage claim, none other than Anthony Mackie came out of a side hallway. I walked up and said hi, and he was the nicest person! I’m a huge Marvel fan, and this was when Civil War was coming out. He chatted with me the whole way out to baggage claim. Super nice and down-to-earth!”

“Got to meet Sean Astin at a comic con, and he was legit the nicest dude. We were getting an autograph for my brother because he is a huge Lord of the Rings fan and couldn’t be there because he was in the military. We got to talk to him for about 20 minutes in line, and he asked about what my siblings and I all did. He was very interested in hearing about my brother’s military service. When his team tried to move him along, he insisted that we wait until he wrote the perfect message for my brother. It was really amazing. I get that, as fans, we pay for these experiences, but you could tell that he was actually a genuinely nice guy who was interested in meeting his fans. His Q&A was also one of the most interesting ones I’ve been to!!’

“I waited on Henry Winkler the night before my undergrad graduation. He was my school’s commencement speaker. He was super polite, asked me about my major and my plans, and gave me a shoutout during his speech the next day. He was a really nice person.”

“I helped John Lithgow pick out a present for one of his grandchildren at a toy store in Boston a few years ago! He’s super sweet and warm, and hearing how proud he is of his grandchildren was wonderful. I tried hard to pretend I didn’t know who he was, but when my coworker asked for a photo, I had to drop my act and ask for one too lmao. He actually became *even nicer* after we asked. All in all, he was super cool. Also, he’s very tall.”

“I met Bob Ross when I was a little girl. My dad checked me out of school early, and we went to the mall where he was signing autographs. He was, by far, the kindest human I have ever met in my entire life. He died not long after this meet and greet.”

“I was staying at a hotel next to Universal Studios in California that had a weird elevator that sort of just dropped you to your floor. Adrienne Bailon (from The Cheetah Girls) got on the elevator with my sister and me, and we all sort of gasped when the elevator dropped us, and then had a quick conversation and a laugh about how scary it was. She was very nice!”

“I was at a petting zoo/pumpkin farm with my kids, and I saw a little girl trying to feed a pony some vegetables. I showed her how to hold her hand flat like a plate, and she was so excited when the pony gently nibbled the treats out of her palm. Her dad thanked me, and I finally got a good look at him and realized it was Macklemore.”

“I served Michael McElhatton (Roose Bolton from Game of Thrones) when he and his wife came into the pub I was working at. He was super sweet and really happy to chat about his character. I told him he was very easy to dislike, and he laughed and said he was doing a good job then. His wife complimented my accent (I’m Canadian living in Dublin), and they left a really good tip.

“Definitely one of my less embarrassing celebrity run-ins 😅.

“I sold Frances McDormand petrol when she was on holiday in Scotland and I’d been having a terrible day (customer service is great). I didn’t let on that I knew who she was because I got the feeling she didn’t want to be interrupted, but she was so nice to me and told me to have a lovely day. She cheered me up after endless horrible customers.”

“When I was a little kid in Nashville, my mom shopped at the same bakery as Johnny Cash. He’d come in to pick up fresh dinner rolls or a pie, waiting in line like all the rest of us. He always made sure the ladies working there gave me a cookie. Didn’t know until I was much older that the very nice tall man in black was Johnny.”

“Had tickets to go see Tim McGraw in concert in my hometown of Brandon, Manitoba. This was way back when he was just starting out, right after his first CD dropped. All night I tried to get backstage for a meet and greet, but by the end of the night I left empty-handed, and by this time I was hungry as well. Unfortunately for me, living in a small town, we don’t have many options for late-night dining, so my friends and I decided to go to a restaurant up on the highway that was open 24 hours. We went inside and waited to be seated when, who should walk in behind us? You guessed it: Tim McGraw!!!! After we gushed over how great he was live, he graciously signed a few things for us before my group got seated at our table.”

“I worked as an extra on a TV show that Stephen Colbert helped create, write, produce, etc. This was back in ‘99 and ‘00, before he was the legend he became, but I knew him from The Daily Show. He was the nicest person. I quoted one of his lines from the show in my high school yearbook and asked him to sign it. He got really excited and told me that I made his day. He still stops to say hi to me whenever I see him.”