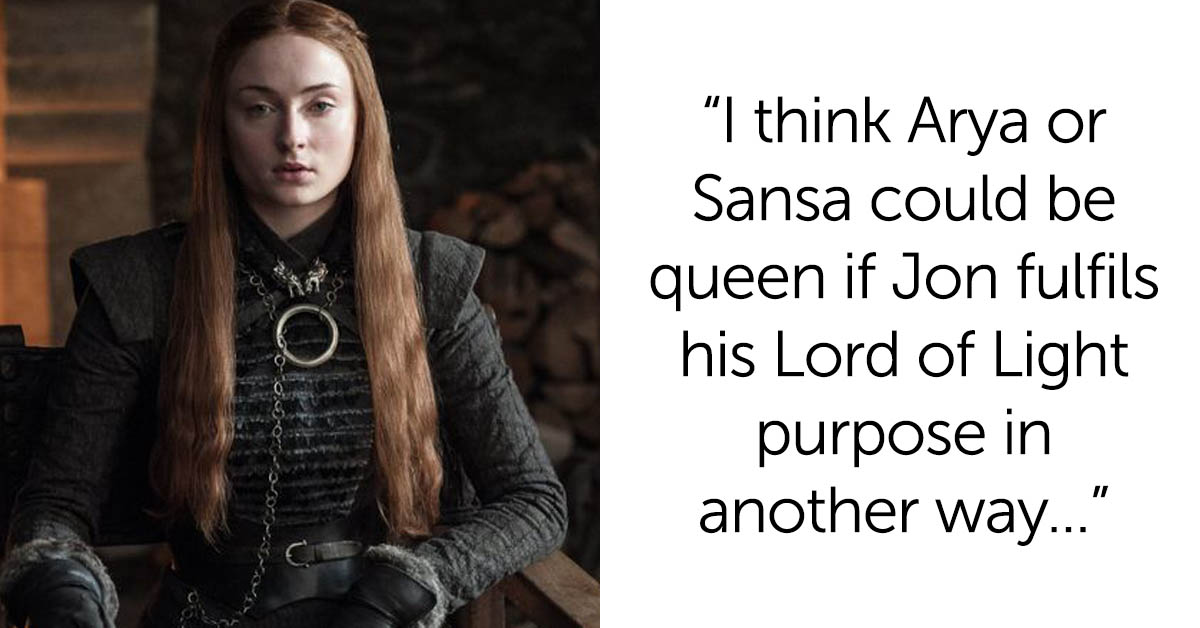 Well, folks, we’re down to the final two episodes of Game of Thrones ever. We basically have about four hours or less to figure out what the hell is going to happen. Season 8 only came out with six episodes total, which has left many of us angry and unsatisfied. Let’s face it—they’re rushing through everything. So much so, that the writing and acting are horrendous. Therefore, we can only anticipate the ending being much of the same.

Recently, however, BuzzFeed asked users to share how they believe Game of Thrones will end, and quite frankly, they’re all probably better than how the writers will actually end the show.

Jamie kills his sister Cerci since he is the king Slayer and the only one who can get close enough. Dany dies while riding a dragon, mainly bc she has lost focus and is “going mad”. Jon ends up on the throne even though he doesn’t want it. It’s like they said last ep. , The kingdom will pick their ruler and they all respect Jon plus he’s a stronger leader. Dany is just strong due to her dragon which Jon also has the ability to control. Arya dies while attempting to kill cercis and the mountains dies at the hands of the hound. Vary ends up Jon’s hand. Sansa will be the queen of the north with Tyrion at her side. –Garyjames

Dany kills Jon. Arya kills Dany and Jaime. Uses Jaime’s face to get to Cersei. Euron kills Arya. Ghost kills Euron. No one ends up on the throne. Everyone dies. –jlbanuel

Small council rule. If Dany is still alive at the end maybe all of the “bend the knee” and “I am her Queen” stuff is leading to her acceptance that to break the wheel she needs to destroy it entirely, Iron Throne included. If not she’ll end up another Cersei and no one person should have all that power. That or she dies and a small council is formed anyway as Jon doesn’t want to be King. –reijiliew

I think that arya will kill jamie to use his face to get close to cersei to kill her, Two of the dragons mated at stormhenge or whatever its called and left eggs behind yara will kills euron and Dany and Jon end up ruling together. –JadedMage

It is the final battle for King’s Landing. Dany is holding Drogon back because she fears the scorpion bolts. Jamie stands by Cersei’s side, because of course she takes him back. It looks like Dany and Jon’s army will be defeated. Behold! Across the water! It is many ships with Daario Naharis at the helm! He has brought his Second Sons to reinforce Dany’s armies. The tide turns. Cersei and her forces are driven back into the Red Keep. She hatches one final plan with Qyburn: there is still more wildfire under the Red Keep and all down the thoroughfares of King’s Landing. They will light it all afire when Dany’s army enters the city. Jamie is aghast: But the innocents! He takes her aside to speak with her privately. She reveals she is not pregnant. She will not change her mind. He chokes her to death. The Mountain kills him. Qyburn and the Mountain are escaping the Red Keep but run into the Hound and Arya. Cleganbowl. Arya kills Qyburn. The Hound kills the Mountain but he is wounded. Arya kills him to end his suffering. That is as far as I’ve gotten. Somehow, Dany is betrayed and banished and Jon becomes the Kind of the Seven Kingdoms. Varys is beheaded for treason. Tyrion drinks himself to death. Sansa rules the North. –SarahBear2

My guess is for Sansa to sit on the Iron Throne. It’s mainly because I see no suitable candidates. I mean, neither Jon nor Dany will get to do it, because the GoT fandom is already divided between them and giving one side the victory would make the whole experience sour for the other side. I doubt Cersei, Euron, Jamie and Tyrion will be alive at the end, so that rules them out. Arya has never cared about ruling, so that literally just leaves Sansa Stark.. one of smartest people in Westeros. She’s got Ned Stark’s heart, since she always thinks about the people, and she can outsmart anyone, courtesy Cersei and Littlefinger. I’m Team Danerys, but my pick for the Throne is Sansa Stark. –aadhithyap

Cersei and Jon rule Westeros after Jon gains the trust of Danys last dragon and has it kill Dany. –megggggo34

I think Arya or Sansa could be queen if Jon fulfils his Lord of Light purpose in another way. Either could be the younger prettier Queen that Cersei’s prophecy mentions. And yes, Arya constantly points out she’s not a “Lady” but she never said she wasn’t a Queen. I worry Daenerys will die but maybe she’ll get to abscond with her dragon(s?) & go be the Queen of Dragons w/the people who love her & leave the Westeros because really it’s just not her home. –caitlinm50

Dany will win the throne but at a huge cost, kings landing will be in ruins with barely any survivors. She has finally got what she believes is her “destiny” but it is soon pointed out by Tyrion that is wasn’t worth it. She has no dragons, no people who believe or support her as the queen, no Jon (he will either be killed in the war or killed by her in a moment of madness), no Missandei, no Dothraki, no unsullied army and not even a standing throne room. She will realise there is more to life than the throne, but it’s too late. As for the other characters… Sansa will rule the north, the hound kills the mountain but is fatally injured so Arya puts him out of his misery then disappears to explore what is west of Westeros, Jamie kills Cersei. Other points, I think Arya will wear one more face, maybe Jamie doesn’t make it to kill Cersei but Arya does it on his behalf? But not sure. The Night King may return in some way through a link with Bran, possibly because he was marked? –LeeshFA

I don’t think anyone will sit on the Iron Throne. I think that the Iron Throne will be destroyed either by accident or on purpose because it symbolises so much. I feel like the idea of a king/queen will be forgotten and some main characters might even rule together as a democracy. I also think it’s possible that Cersei will kill herself and most of the characters somehow, maybe by wildfire. –evansomers

This is all based on the account of Sam. He is the true author of this epic. Martin takes a lot of inspiration from the Tolkien works and they are all told buy the perspective of a character and who better than Sam. Also explains why after in the show, Dany roasted the Tarlys she began to appear as the Mad Queen… Because he wrote it that way. History is the bias of the the author. –brycef4d86290cf

The Night King isn’t dead, it’s a vicious time cycle. A Stark is destined to always roam the Earth as a “Night King”. 1,000 years ago the world looked remarkable the same, no vast technological advancements, the children of the forest would have known dragon glass could kill them, because they used to create them…and the idea old Nan’s story of how they were driven back…. preposterous. When did we see the white wakers retreat ever. They never went back behind the wall. The leader was defeated, then reborn again on the other side of the wall…-brycef4d86290cf

Brianne will get captured by Cersei and will be forced to fight The Mountain, she’ll get killed (sob!), The Hound will jump in (Cleganebowl!) and Jamie will kill Cersei I don’t think that anyone will end up on the throne (a lot of people on here have the same opinion!), that Tyrion and Sansa will form a government of sorts…-joolzr2

Pod gets the throne. And the ladies. –judithi3

Jon will become the new Ice King, Tyrion will find out he’s a Targaryan and end up on the Iron Throne which will make Sansa the Queen since they’re still married (technically). Arya is going to kill Dany and Jaime will kill Cersei. –lorettag2

Dany will be sitting on the Iron Throne with dead bodies and blood everywhere, Drogon roaring beside her. The Mad Queen. –t448dac9d3

The entire series was a dream Bran dreamed up during a coma after Jamie pushed him out the window. –Stevirs22

Ghost will go all John Wick on everyone over the fact he didn’t get a goodbye pat. He will take the Iron Throne. –linneag4bfd2c42e

This is just a theory, I don’t really expect it to come true, but if Jon becomes king, he could give the title to Sam, and serve as hand to the king, just as Ned did. Sam is intelligent and fair, and I think him, Gilly, and their children could start over and untie what’s left of Westeros. –Broadwaybby

With Tyrion relaxing at his vineyard, toasting with The Imp’s Delight, and FINALLY finishing his joke (or more likely the show will abruptly end right before the punch line). –kaitlins4ef8ec16a

Everyone kills each other. Varys takes over the realm and begins a new era without houses and nobles. –erikaf11

Sansa as Queen with Arya as her hand. Bran the advisor. All other big names perished. –Sharimg

So I think Jon is going to go back to the North. I don’t think he’s going to rule Winterfell though. Since there’s not much point in the Night’s Watch if the White Walkers are truly gone, I think that Jon is going to become “King” of the free folk, a la, Mance Rayder. I think Sansa would choose to stay in the North if it were up to her. The 7 kingdoms will probably break up into separate kingdoms, and Sansa will rule the North. Euron is going to kill Cersei. If the 7 kingdoms/any amount of them DO remain united under one ruler, I don’t think it’s going to be Dany. I think she’s going to die, and Gendry will become King, since he’s been legitimized and is recognized as Robert Baratheon’s son, he has a claim. He also told Arya that he has no idea what he is going, so he’s going to listen to his council, and I feel like it’ll be made up of Tyrion, Bran, Arya, Davos, and a few others. He and Arya might even get married! She wouldn’t be a lady! She’d be a queen! –kelseyh4d6c4b757