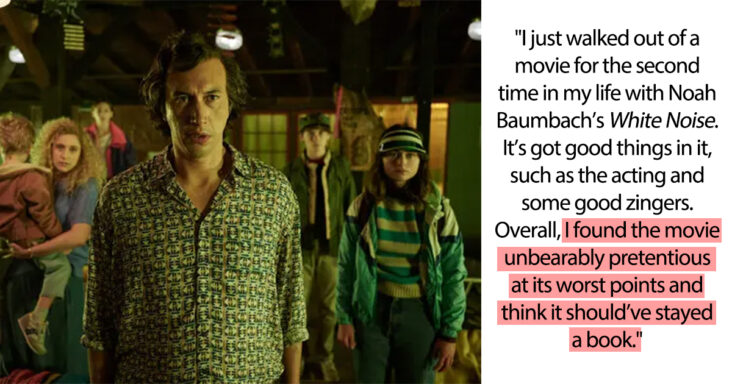 We’ve all been there: Sometimes a movie is so awful that people actually walk out.

That was the subject of a post on the r/movies subreddit, where u/jelatinman asked the group which movies they’d walked out on.

The answers spanned all kinds of genres and actors, but they all had one thing in common — at least one person got up and left.

So without further ado, here are 22 movies that made people get up and walk out.

“Overall I found the movie unbearably pretentious at its worst points and think it should’ve stayed a book.” – u/jelatinman

“It was morbin time to gtfo that theater.” – u/yoloswagbot

“My mom took me when I was 10. Not sure what she expected.” – u/LordSwitchblade

“I walked out of Butterfly Effect because I got way too high on edibles and thought I was probably going to die.”
– u/AlrightSpider

“My car was getting fixed and they said it will take 3-4 hours so I crossed the street and went to the theater and after an hour of that movie I walked out and decided [I’d] rather just wait than finish the movie.” – u/fredozimbabwe

“Idk what I was expecting but it did not do it for me.”
– u/spinktone

“When I was about 8 (?), my mom took us to see the Chamber of Secrets. I was terrified of the Basilisk. When Harry killed it, I was afraid it’d come back to life and begged my mom to leave. We did and she was not happy.” – u/Batata_Santa

“My dad and I still talk about walking out of that theater to this day so it left more of an impact on me than several other films!” – u/jacksizzle

“Felt sick to my stomach. Too much camera shaking.”
– u/Scarfwearer

“As soon as the kid started getting his limbs twisted until his bones broke I had to NOPE outta there.” – u/Mysterious-Sense-185

“I was even on a date. I told her if she wanted to finish it, I’d be in the arcade. But she hated it as much as I did and we laughed at how horrible it was all the way home.” – u/akg7915

“One of the worst movies I’ve ever seen.” – u/ColoradoRS7

“I’ve seen bad movies with friends before (like The Emoji Movie) and had a fun time but I actually felt like I was wasting my time watching Cats.” – u/protosam

“Couldn’t even see the funny side to the terribleness I was witnessing.” – u/user-8472-

“Didn’t walk out but first movie I totally fell asleep in. Knocked out.” – u/OtakuTacos

“Made it 20 minutes then I couldn’t stand it.” – u/ethanzlevin

“The 3d gave me a headache, walked out and went to see The Road.” – u/PackerAndretti

“It was utterly impossible for me to get engaged with a movie where an American-accented, eyepatch-wearing Tom Cruise runs around as a Nazi conspiring to assassinate Hitler so I just left.” – u/DONNIENARCO

“I didn’t think it would be as boring as it was. Action etc just felt really… I don’t know, flat? Whole thing just came across as pointless, going through the motions.” – u/Horkersaurus

“The movie was amazing but the camera action and cuts didn’t sit so well with me, who messed up too by coming in late and being forced to watch from the front row.” – u/agncat31

“When the cop was tied up and Michael Madsen started cutting off his ear I chickened out and left.” – u/Bookandaglassofwine