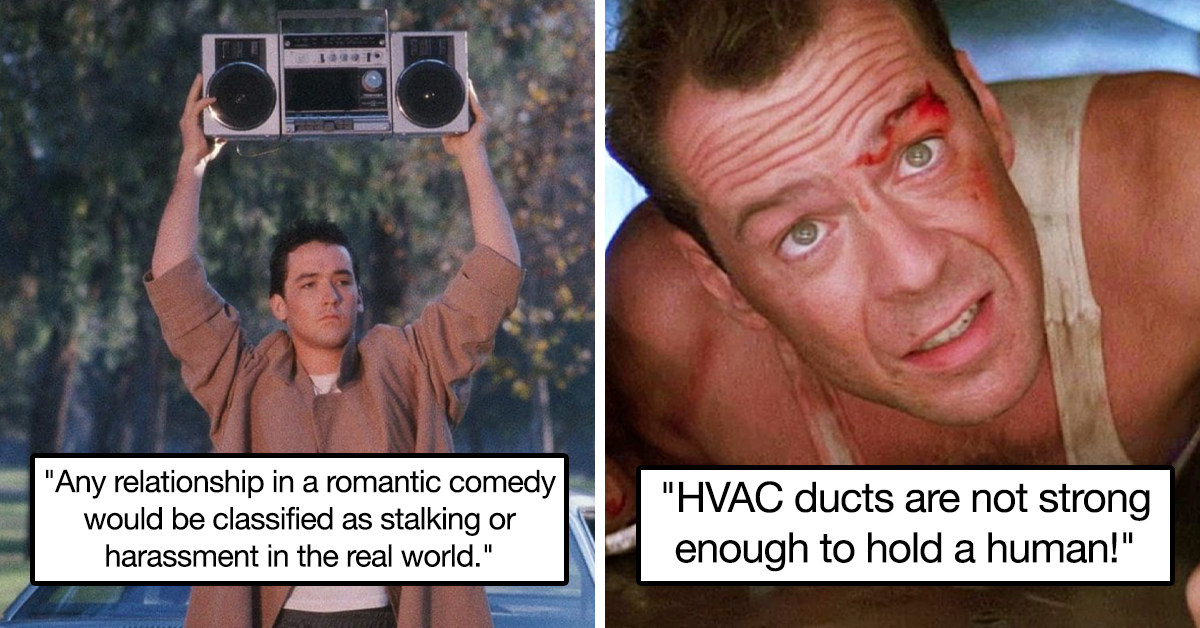 Here’s lookin’ at you, phone-dial-tone-when-someone-hangs-up.

Now — full disclosure — I work in the TV & Film industry so I know that sometimes you have to cheat reality a little bit when you’re on set. Not everything needs to be in the final cut, not everything is going to match the real world. There’s usually a reason.

With that in mind, let’s peruse the responses to u/Itchy-Ingenuity6833‘s question, “What’s something that’s always wrongly depicted in movies and TV shows?”

“Basically any kind of legal proceeding, but jury trials especially. The thing is that trials tend to be pretty boring and move slowly in reality. And they rarely have the kind of dramatic moments portrayed in movies. Also, most screenwriters don’t know basic facts about procedure, rules of evidence, etc. As a lawyer, I can barely watch shows or movies about legal cases. The unrealistic portrayals always ruin it for me. But it’s a joy on the rare occasion when it’s done right.”

“Teens not getting carded or being denied by bouncers at the club. When I watched Gossip Girl for the first time, I was shocked they were still in high school.”

“Paramedic here. To break a neck, you would have to put 100% of your victim’s weight with your arms alone, and even then, you will not be guaranteed an instant, silent death. You have greater chances to just make someone tetraplegic, and they will scream the whole time. An instant neck breaking kill is achieved by twisting the brain stem beyond all reparations OR sending vertebrae fragments into it (anything short from a car accident or fighting a gorilla is unlikely to do that). About 9 times out of 10, you will most likely just damage the spinal cord.”

“Any relationship in a romantic comedy would be classified as stalking or harassment in the real world.”

“The speed at which police forensics can take place. They solve things in minutes that really take days or weeks or months.”

“The sound usually used for an eagle call in movies is actually the call of a red-tailed hawk. Eagles just don’t sound majestic enough, so they did the ol’ switcheroo.”

“Childbirth. A lot of times, the water doesn’t break on its own. And labor and delivery take more than a frantic 30 minutes.”

“Armor. It’s slowly getting better, but you still get fight scenes were a dude cuts through someone’s armor or helmet with a sword slash as if it were a pillow case. In reality, virtually all armor was effective against sword slashes   even gambesons, which were made from layered cloth. You can look up and find examples of people slashing iron chain mail with a steel katana and leaving only a faint scratch on the rings. Plate armor, like the classic knight’s suit of armor, was nearly invincible. You couldn’t cut or stab through it with anything.

“Plate armor was also designed to have its weight evenly distributed across the strongest parts of the body. Guys inside didn’t stomp around like cartoon ogres, taking wild swings with their weapons. A man could sprint, roll, do jumping jacks, etc., in a suit of plate. A heavy backpack would be more tiring to wear than a fitted suit of plate. We know this because many hobbyists and professionals have acquired antiques or had realistic replicas created and then put them through a litany of tests.”

“It always bothers me how long people look over at their passenger when driving. KEEP YOUR EYES ON THE ROAD.”

“HVAC ducts are not strong enough to hold a human! They are made to hold air. Yes, you can climb in/stand on some ducts. Some are big and strong enough. But these are exceptions, not the rule. While movies portray otherwise, you can’t enter the HVAC system at one point and expect to get anywhere you want in the building; you must enter the right zone. And even then, you won’t get much further than the main duct (which is probably located over a hallway), and you most likely will not be able to reach specific rooms.”

“When their entire family or friend group dies, but then [the character is] absolutely fine after a minute or two and just moves on.”

“In almost every film or television show depicting military combat in the 18th century (think the American Revolution or the Seven Years’ War), the soldiers wear their cocked hats (tricorn hats) facing forward. In reality, the hats were worn at an angle because if you had to turn your head while shouldering your rifle or musket, it would end up hitting your headwear out of place had they been worn facing forward.”

“How absolutely loud gunfire is, especially in enclosed spaces. Hero [goes] in a concrete stairwell with no hearing protection. BANG, BANG, BANG. Then, the hero hears footsteps as someone sneaks up on them. You’d be deaf and have your ears ringing for a whole day after.”

“Cancer treatment. The person always has a completely bald head (no discoloration because that part of the head has almost never seen the sun), but still have their perfectly done eyebrows. Or else they have no eyebrows, and they always have their eyelashes. Chemo causes hair to fall out EVERYWHERE, but how many actors are going to let makeup get rid of their eyelashes?”

“Knocking someone out/head injuries. If a person were bonked on the head and knocked out, they would 100% need to go to a hospital.”

“Playing instruments. They hold them upside down, on the wrong side, hands aren’t even close to being on the right keys/holes. Horrific fake bowing on strings, and terrible fake guitar strumming. Being able to learn an instrument instantly, etc.”

“There’s this constant portrayal of people with mental illness having a ‘breakthrough’ after one session of therapy and suddenly being cured, and that is just so f*cking wrong and frustrating to see.”

“Breakfast: [They take] a sip of orange juice and bite of toast and go, ‘Oh, look at the time   gotta go.'”

“Every time someone knocks on a door or rings a doorbell, they only wait half a second before knocking or ringing again. And then the person usually answers as quickly as if they’d been literally posted behind the door to receive guests. No one wants to watch a guy stand there for 30 seconds as someone comes to the door, but they could at least skip that with a camera cut instead of the silly frantic knocking and insta-answers.”