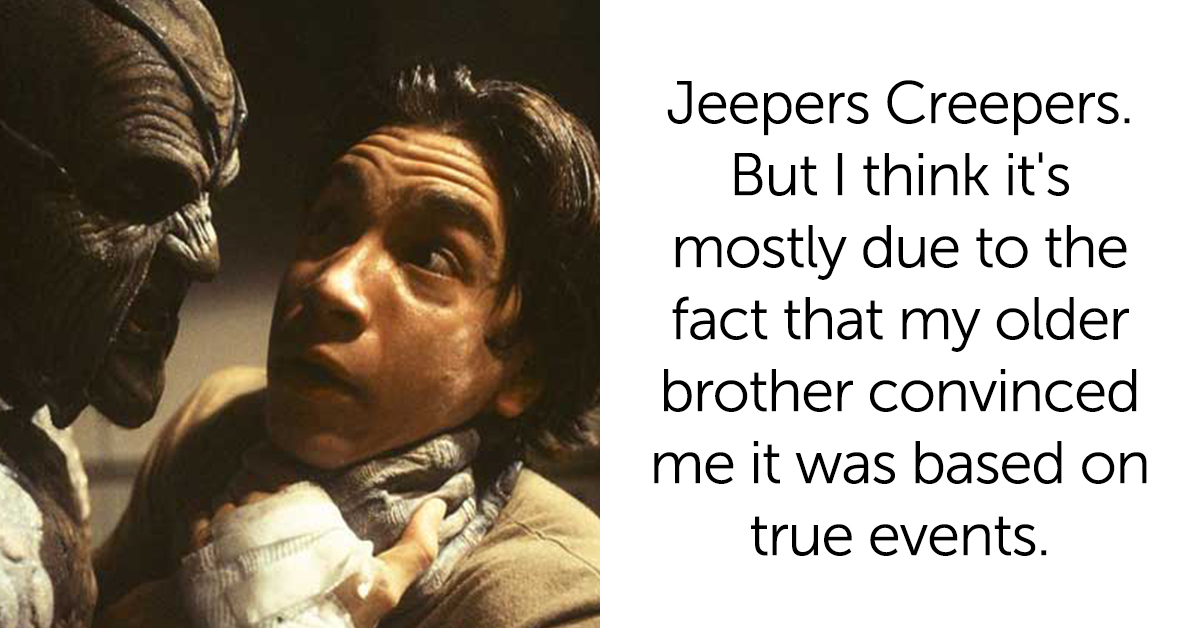 When you were a kid, chances are good, you saw at least one movie that was beyond your years—a movie that still haunts you to this day. Maybe your parents let you watch IT when you were a toddler and now you have a permanent, unrelenting fear of clowns like me. Or perhaps, it wasn’t a horror film, maybe James and the Giant Peach just disturbed you on a deep emotional level…

Whatever the case, these Redditors are sharing the movies they saw as kids thatended up scarring them for life and honestly, same.

My dad thought it would be a good idea for me to watch The shining when I was 6.

My young mind was not ready for that movie.

Jeepers Creepers. But I think it’s mostly due to the fact that my older brother convinced me it was based on true events.

I forget which one but it was one of the Final Destination movies, itwas the one where there was a guy who died to a pool drain and someone died because their shoelace got stuck in an escalator, that gave me a fear of escalators for a while.

The melting dude got me bad.

I snuck in to see The Exorcist when I was 12. I didn’t sleep for an entire summer. One morning, about 6 am, a woodpecker or some bird got into our attic and was pecking and flying back and forth. I woke up my younger brother and sister, made them come with me to the attic door. I made them hold hands with me and say the Our Father. I was out of my mind.

Pet Sematary. I still get a little freaked when getting out of bed in the middle of the night for fear a crazy undead child will slice my Achilles with a knife.

Haven’t watched it since. And won’t. For serious though. Haven’t watched this movie for decades. I just remember it being way scarier than it had any right to beand it was nightmare fuel for years. I haven’t forgot how much it scared me as a kid. As a grown ass adult with a kid of my own I am still apprehensive to watch it again, but I saw I can rent it on Prime streaming for $3…shit.

The Hills Have Eyes (•-•). That movie messed me up for a long time.

Also, not a movie, but there is a Simpson’s episode where younger Homer finds a dead body and that gave me anxiety fits for weeks.

IT and Nightmare On Elm Street

My brother made me watch the first scene of Twister when I was 7.

Didn’t watch any of the rest of the movie after seeing the dad get ripped from the doorway in front of his family. I’m still terrified of tornadoes 20 years later, even though I live in a place that never gets them and have never seen one in real life.

The ring. I was around 7 or 8 at the time and had never watched a scary movie before. Anyways made it to the end of the movie completely shitting myself. Used to sleep in my clothes, pee in jars and hide them in a drawer to avoid going to the bathroom late at night, if I was brave enough to make it to the bathroom I would sleep on the floor. Had an old tv in my room at the time that I would cover at night with a blanket lol this went on for easily a year then I started to get over the fear decided I was gonna watch tv one night flicking through the channels and what do i see? The ring 2 🙁

I was around 8 when I tried seeing the first aliens movie. That first chestburster scared the shit out of me.

Fire in the Sky scared the living shut out of me. I had so many abduction nightmares after that.

Weeks and weeks of nightmares centered around that thing that honestly looks like it was made from paper mache, and the skeletons. I was goddamned terrified of skeletons as a child.