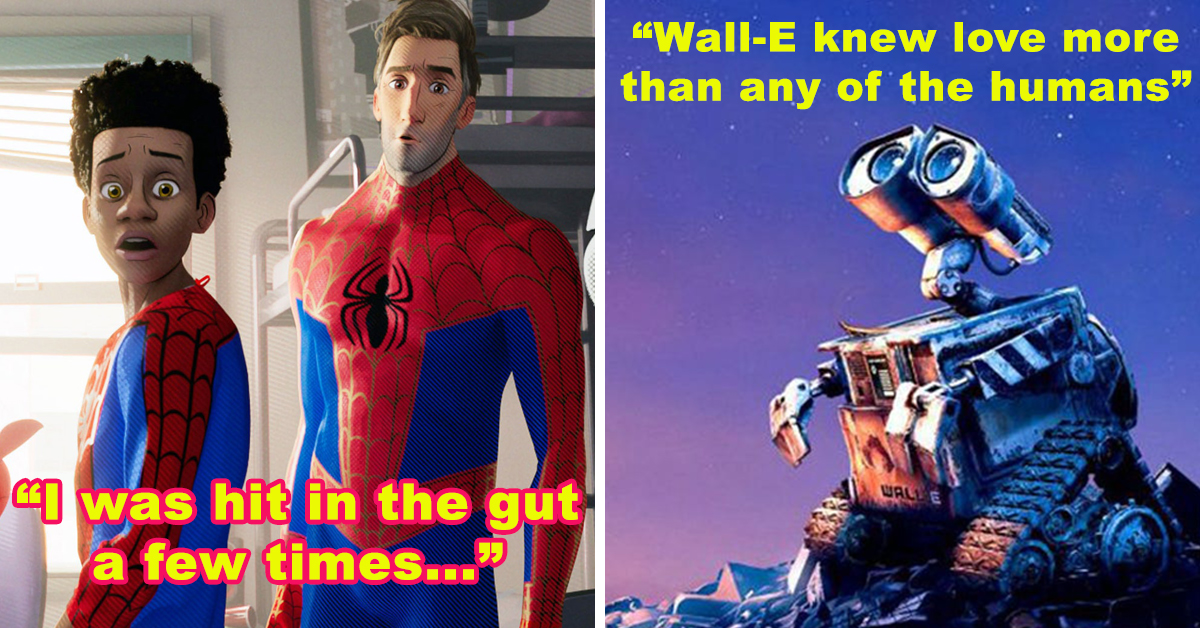 Whether you’d like to admit this as a grown-ass adult or not, movies that are made for children can be just as moving as any adult drama or rom-com. (I mean, come on, I may be a softy but if Toy Story 3 didn’t have you ugly-crying I’m concerned for your soul.) As adults, we like to pretend we only watch kid’s movies because we have to entertain our children or nieces and nephews, but since the beginning of animated films they’ve been just as emotionally fulfilling as any blockbuster hit. Hell, think of how many animated films you’ve seen that have made you question whether or not it’s actually made for kids.

What better way to make ourselves feel less like little emotionally unstable babies than to talk about which of these animated movies made us all cry.

Redditor u/molliegeorgie asked the people of Reddit: “What animated movie affected you most emotionally and why?”

The answers will bring you back to a very vulnerable place so this is a fair warning. Oh, also, there are a few spoilers in here but if you haven’t seen most of these movies at some point in your life what are you even doing?!

Here’s a list of the 25 best answers in case you needed a good cry today.

“Nani worked hard for Lilo. Things were going wrong but she still tried for Lilo and didn’t want her to be taken away. Now that’s burning love.” –Pancakeisfat

Gets me every time.” –booksoverppl

“Charlie’s entire journey of dying then coming back from the dead to dying again but to save a little girl that changed him forever always gets to me. But learning about Judith Barsi’s death makes me look at the film in a whole new light, and I get overwhelmed with sadness every time I listen to the song “Soon You’ll Come Home.”

The fact her character wanted nothing more than to have a happy and loving family is only more emotional when Barsi had the exact opposite in real life. It’s no wonder she herself couldn’t sing it without having an emotional breakdown she needed a different actress to do the singing for her.” –phantom_avenger

“There were quite a few scenes from Up that really got me choked up. The beginning when they show their love story and Ellie dying. Ugh, I cry every time.” –makeitwork1989

“I’m an elementary school teacher. I used to read Charlotte’s Web to my students. I could never read the line, “No one was with her when she died.” without having my voice crack. She was so selfless and died alone.” –lobstahslayah

“You stay. I go. No following.” –oxymoronisanoxymoron

“I saw this film without any expectations and it was surprisingly emotional and amazing to watch. Every time I see Baymax hug Hiro, it reminds me of the hugs I always and love getting from my parents.” –Snoo79382

“It just broke my heart how Wall-E was left alone and what all happened. Wall-E knew love more than any of the humans.” –areyyyyyy

“Mostly the scene where he sacrifices himself while reciting the bad guy motto but the whole movie, he’s the nicest guy but nobody will look past that because of the role he’s been cast in and all he wants is a little acceptance. It hits really hard for some reason and I cry every time.” –kayhd33