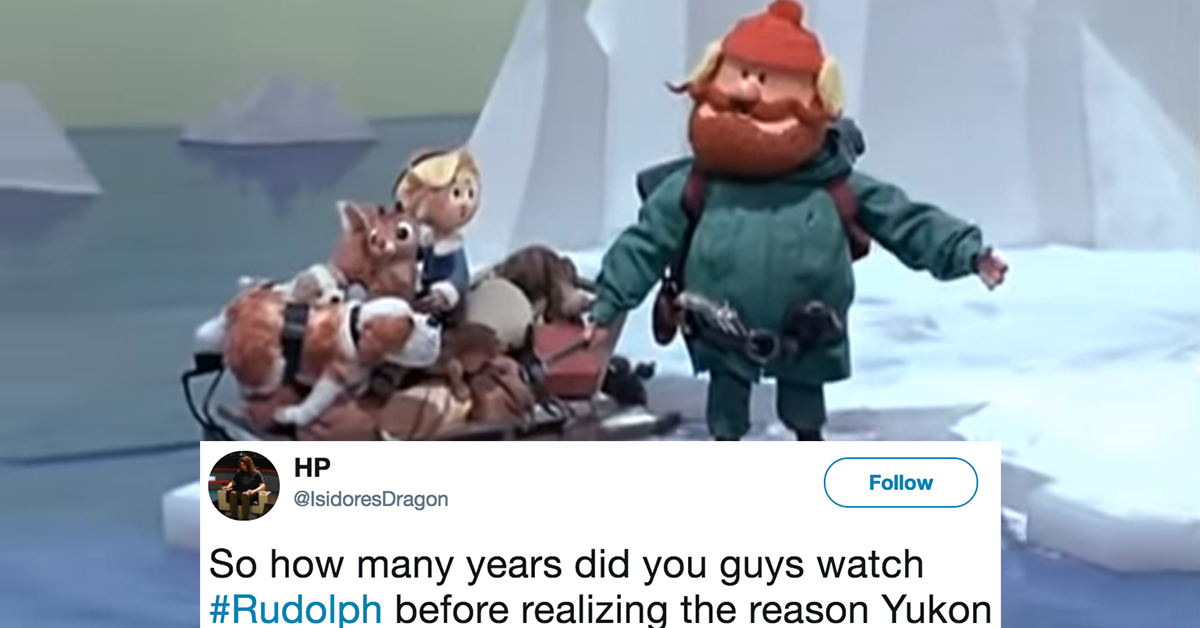 1964’s Rudolph The Red-Nosed Reindeer is a Christmas classic that I’m sure every child over the last 50+ years has seen at least a few times. Even if you haven’t seen the film, you’ve at least heard the song. The thing is, through the lens of your adult life, Rudolph is a pretty messed-up movie. It’s colorful stop motion characters and whimsy can’t hide the darkness within. Twitter was quick to find everything wrong with Rudolph.

1. The Message Of The Entire Movie Is Kinda Dark

#RudolphTheRedNosedReindeer teaching kids since 1964 that your peers will only accept your differences if you can provide them with some kind of service pic.twitter.com/Dh2O44bvZg

2. That’s Not How You Congratulate New Parents, Santa

Okay, I’m going to say what we’re all thinking: In the scene where Rudolph’s nose is revealed, Santa is kind of a dick. #RudolphTheRedNosedReindeer

3. Rudolph And The Reindeer Live In A Capitalist Hellscape

I will never not tweet this when #RudolphTheRedNosedReindeer is trending. pic.twitter.com/XqDl8SGV80

4. Seriously, What Was Wrong With The Doll?

One of the great mysteries of modern times: What is wrong with the dolly on the Island of Misfit Toys?? Why is she a misfit?? #RudolphTheRedNosedReindeer pic.twitter.com/xCA0TLVYYr

So how many years did you guys watch #Rudolph before realizing the reason Yukon Cornelius never found anything was because his sled went in circles due to having grown dogs on one side and puppies on the other? pic.twitter.com/DCZEu4mSbN

7. Don’t Get Me Started With Coach Comet

This reindeer is every terrible coach you’ve ever had rolled into deer form. Rudolph out-performs every other kid with his airborne twirls and all Coach can see is his red nose. Despicable.

Donner is the LaVar Ball of reindeer dads. #Rudolph

9. Fireball Had No Room To Talk

Fireball has the gall to make fun of Rudolph’s nose when he is the only one with hair #RudolphTheRedNosedReindeer #Rudolph pic.twitter.com/NwdEWyfTJC

10. But Maybe None Of The Reindeer, Rudolph Included, Were Sleigh Team Material

Listen, at the end of the day, Rudolph is a me-first, flashy, showboating reindeer and not the kind of sleigh puller you can build a team around in today’s league, you need a Donner, a lunchpail deer who shows up, puts the sled team first and puts in the work, clear or fog,

11. Then There’s The Biggest A-Hole Of All: Santa

Santa is merciless capitalist who only cares about strict uniformity in his frozen regime. He makes veiled threats to Donner and his wife when he finds out Rudolph has a nose defect. “I’m sure you’ll make this right.” He also shames Rudolph after Rudolph proves he can fly well, but loses his fake nose in the process. “You should be ashamed of yourself, Donner. It was a good performance too.” Santa can kick rocks.

Rudolph telling Santa to shove his request is my secret fantasy

ah yes, rudolph the red-nosed reindeer, the classic tale of one’s differences only being accepted once they can aid the capitalist mode of production

14. The Movie Should Have Ended This Way

Santa: “Rudolph with your nose so bright, won’t you guide my sleigh tonight?”
Rudolph after being treated like shit all those years for his nose:
pic.twitter.com/ihW6sd1vhI

15. Did We Mention That Santa Sucks?

#Rudolph: “Where are my parents?”

Santa: “They’ve been missing for months, I’ve made no effort to find them, and here’s a list of ways that their disappearance inconveniences me.”

16. Also They Killed A Bird

Let it be known that the toy bird that can’t fly gets murdered by one of Santa’s elves during the end credits of #RudolphTheRedNosedReindeer. Gotta give credit to @RalphGarman for pointing this out to me. pic.twitter.com/qGNcevXXxl