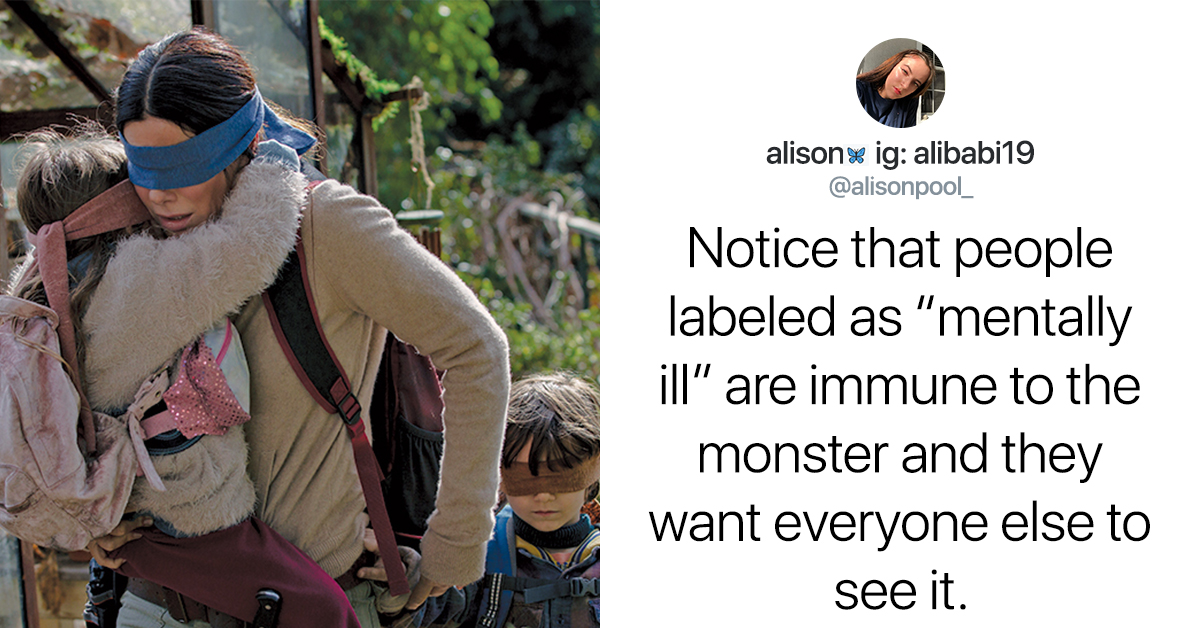 Unless you’re living under a rock, I’m sure you’ve heard about the latest movie to sweep social media, creating a new world of memes, jokes, and theories—Bird Box. The Netflix original film starring Sandra Bullock is about a monster that no one can “see,” because if they see it, they die. The film, therefore, has many people living their lives blindfolded to avoid the monster. Bullock and her children go on a journey to find safety, taking the entire trip blindfolded. Many people online have begun obsessing over the thriller and even trying to do the Bird Box challenge, where they complete tasks blindfolded.

But, while many have been fangirling over the movie, some may have missed the bigger picture and deeper message. According to one Twitter thread, that makes a lot of sense, the film has a huge underlying message about mental health and mental illnesses. Twitter user @alisonpool_ shared the theory online and since posting, it has gone viral across the network.

She claims that the monster in the film represents a personified version of “mental illness,” stating the monster makes you “hear voices” and commit suicide.

You all are totally missing the underlying message of this film!

The monster makes you commit suicide and hear voices. Notice that people labeled as “mentally ill” are immune to the monster and they want everyone else to see it.

THEY WANT EVERYONE ELSE TO SEE WHAT ITS LIKE TO WANT TO TAKE YOUR OWN LIFE AND HEAR VOICES IN YOUR HEAD. The monster is suicide and mental illness personified.

She also points out that the characters interact with many different symptoms of mental illnesses.

Throughout the film you slowly watch people unravel and fall victim to their own fear, paranoia and violent behavior, all symptoms of mental illness.

She pointed out that the point of having individuals blindfolded is to prove that mental illnesses have no “face” and can affect anybody.

This forces the audience to ask “Now who’s crazy?”. Without any in depth information about the “monster”, all the characters are figuratively and literally left blind.

Why can no one see the “monster”? Because suicide and mental illness don’t have a face. It can affect anybody.

She also shared specific scenes that prove the theory true.

In the scene in the kitchen with Sandra Bullock (Malorie), and Trevante Rhodes (Tom), Malorie says something to the effect of “My sister would have never killed herself. She wasn’t like that”.

Today we have those instances of people who were clearly exemplifying suicidal tendencies before they took their own lives, but the stigma surrounding suicide and mental illness often causes people to hide those feelings rather then talk about them;

we’ve all seen those new stories and interviews were people who were close to a suicide victim say things like “She never seemed like she’d do something like that” or “everything seemed fine”.

The scene where Danielle’s McDonald’s character (Olympia), asks Malorie to take care of her child if anything happens to her is also very telling.

Olympia speaks about feeling like a burden because she was spoiled her whole life and “all that love made [her] soft” while Malorie proclaims she was “raised by wolves”. Both women are PREGNANT, and despite their different backgrounds are at the mercy of the same invisible force.

I think this is a commentary on gestational and postpartum depression.

Almost all of the characters are dealing with grief to some degree, especially Malorie and John Malcovich’s character (Douglas). They both watch their loved ones commit suicide.

This shows that suicide doesn’t just affect the victim, but also the people around them.

In the end we see that the only way for Malorie and her kids to survive is by USING THEIR VOICES.

Now go rewatch the movie and stop looking at things at face value. That kind of observation is what the film is trying to get you to stop doing. It’s so much deeper than that.

Many people on Twitter agreed that the theory seemed super on point and that it was woke AF.

This whole thread is woke af

i thought i was the only one who peeped this.. immediately after watching it

Finally ! I’ve been saying this for a minute

Thank you for writing this