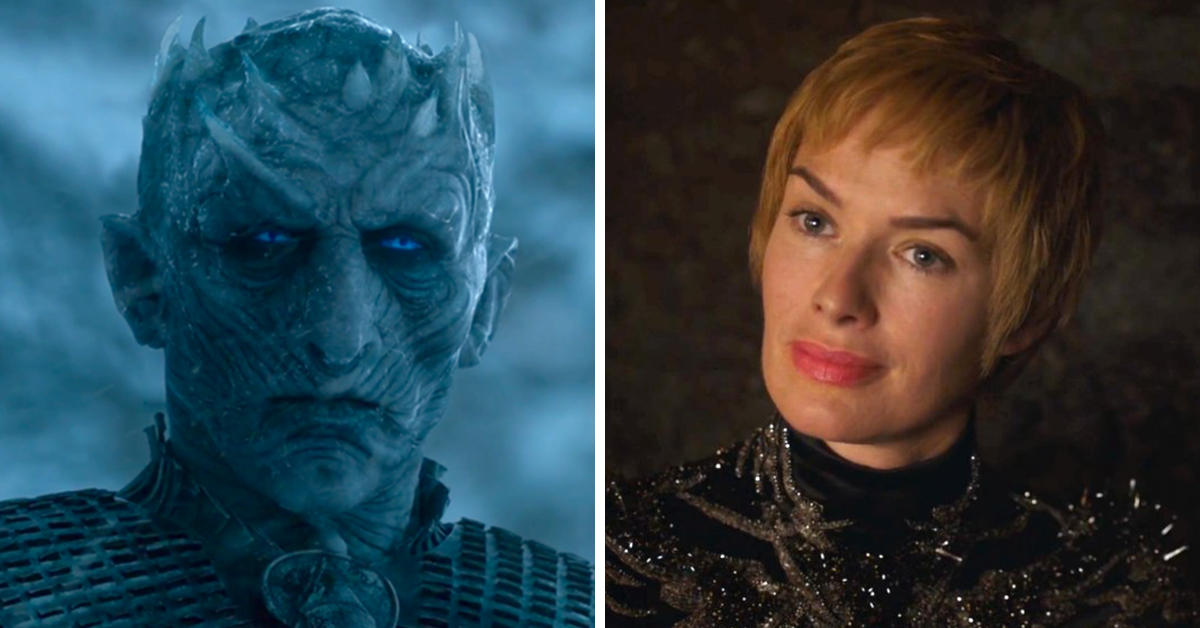 As with every Game of Thrones post we do, I’ll just warn you that this post is chock-full of spoilers, theories, and more.

The battle of Winterfell is upon us. At the end of Season 8, Episode 2, we saw the White Walker army counting down the moments until they’d be charging into Winterfell to slaughter everyone we know and love.

But, if you look really closely at the split few seconds in which producers show the Army—the Night King is nowhere in sight. One would think that if an entire army is about to take down a castle—you’d want your fearless leader right up in front.

Additionally, there’s no sign of Viserion either. If you’re going to try and take down an entire population of living people, you may want to bring the blue-fire breathing dragon that you hijacked from its mother…right?

If you’re like me, you’re wondering: “What the f**k?!?” Reddit user u/qp0n has a pretty solid theory about where the Night King and his Ice Dragon are headed: King’s Landing.The theory basically states:

Most people have come to assume that the living will lose The Battle of Winterfell and fall back to Moat Cailin … I predict they actually win the battle… only to find out soon after that there is a new army of the dead much bigger and much further south… the population of King’s Landing.

Let’s break it down further because in all honesty, it checks out more than any other I’ve read online so far this season.

First, we haven’t seen the Night King once this season, and even though we’re only two episodes in, there are only six in total. If the Night King was going to be at the Battle of Winterfell, we would have seen him already.

Also, Daenerys has two dragons, while the Night King has one. It’s safe to say that the Night King is not stupid enough to bring one dragon to a two-dragon battle.

Dany is most likely going to rely on Drogon and Rhaegal a lot to defeat the army that’s marching on Winterfell.

According to Daenerys in Season 7, Episode 7, the Night King’s army is 100,000 deep. (This was also back before the White Walkers broke through the wall and destroyed the camps and towns on the way to Winterfell.)

If the battle of Winterfell is to go down the way in which we all think it will—huge, epic, with tons of deaths—it will distract practically everyone in the North from the fact that the Night King is riding Viserion to King’s Landing.

Let us not forget how many people are living in King’s Landing at the moment.

There are a million people in King’s Landing on a good day. But with Cersei’s request from the Golden Company, there are 20,000 men and 2,000 horses more than before.

If the Night King is after what Bran Stark said he’s after in Episode 2—to erase humanity and history as we know it—they will want to take down as many people as possible.

The theory also is also supported by past episodes.

In Season 2, Episode 10, titled “Valar Morghulis,” Daenerys has a vision in which she walks through a destroyed, snow-coveredThrone Room in King’s Landing. The roof of the Throne Room is completely gone— perhaps from Viserion blowing it off with Blue fire?

It seems that Daenerys is foreshadowing that King’s Landing will ultimately be destroyed by the Night King’s army, and she may never be able to regain her family’s name on the throne at all.

And!!! In Season 4, Episode 2, titled “The Lion and the Rose,” Bran has a vision of a dragon’s shadow flying over King’s Landing. Let us note that every single one of Bran’s visions has come true—except for this one.

If it’s true that the Three-Eyed Dragon can see throughout all of time time (past, present, future), it could be that the Night King is flying over King’s Landing with Viserion, ready to take the entire city.

Plus, with the Night King’s mark on Bran’s arm and the fact that he can find Bran at any time, he’s in no rush to get to Winterfell.

He knows that his army is rolling deep into the North right now, ready to kill off whoever they need. But, if the Three-Eyed Raven were to survive, he can return to find Bran at any time and erase the history of humanity as he likes.

According to the theory, Bran can actually become an enormous strategic asset for the Night King.

This could be where Bran comes into play. The NK probably wont want to face off against the other dragons head-to-head, but rather fly around Westeros destroying castles to make things easier for his footsoldiers …. so they will need Bran’s Sight in order to track & hunt him. It would be too difficult for an army on foot to chase the NK on a dragon, so Bran could warg into ravens to serve as a guide for dragonrider(s) to his location.

Clearly, the idea that the Night King is riding south to take on King’s Landing is 1000% plausible. However, u/qp0n points out that there could be one saving grace—Bronn. If you recall, Cersei sent Bronn North to kill both Tyrion and Jaime.

The Reddit user believes that Bronn could spot the Night King and reveal the news to those at Winterfell, leaving Cersei and her Golden Company totally open and vulnerable to the attack.

This theory is so accurate, it completely f**ked me up—bad. What do you think? Is the Night King going to ruin King’s Landing as we know it? At least Cersei will be dead, finally.