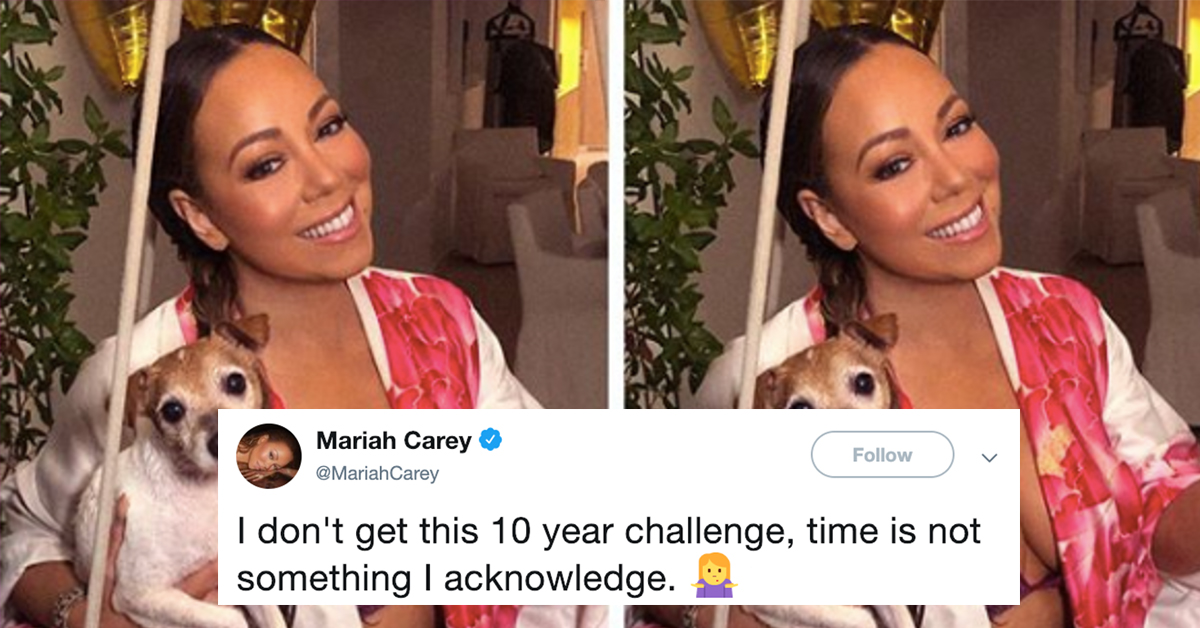 You’ve undoubtedly seen celebrities and plebes taking part in the ’10-Year Challenge’ on social media, a meme that involves posting a 2009 picture of yourself alongside a picture of yourself now. While many of them flaunted smug glow-ups, others were self-deprecating jokes or an unwitting desire to participate in a meme that is almost undoubtedly a Facebook algorithm built to collect data on aging.

Then there’s Mariah Carey, who bucked the algorithm and disregarded the entire challenge and won anyway. She is better than all of us, and this photo posted on Wednesday is evidence:

I don't get this 10 year challenge, time is not something I acknowledge. 🤷‍♀️ *Picture taken at some point prior to today pic.twitter.com/f5XUye3Hot

Rather than sharing a photo of herself from 2009, Carey—who has in the past demanded her birthdays be referred to as ‘anniversaries‘—posted two identical photos next to one another. She captioned her post: “I don’t get this 10 year challenge, time is not something I acknowledge,” adding, “*Picture taken at some point prior to today.”

The point here being: Mariah Carey doesn’t GAF about aging, probably in large part due to the fact that it doesn’t GAF about her. At 48 years old, she is as sprightly, sexy, and sassy (the 3 S’s of divahood!) as ever, and this self-assured disregard for the fourth dimension has fans bowing down. 2019’s new mantra, folks have decided, is: “Time is not something I acknowledge.”

My Credit Card Company: Uhm, hello, you haven't paid a bill in a year…?

Me: Time is not something I acknowledge https://t.co/yliYDHLxK7

When my advisor gives me a deadline:

I’m sorry, time is not something I acknowledge. 🤷🏾‍♀️ https://t.co/N6BqcNR1cA

"Time is not somwthing I acknowledge" here Mariah Carey is commenting on time as a human concept that does not exist as something linear like commonly believed but circular. In this essay I will- https://t.co/AtimQ1AFkk

Many other celebrities couldn’t resist the challenge. From Kate Beckinsale to Gabrielle Union and even to Mariah’s ex Nick Cannon, side-by-side comparison pictures have taken over the web. But none came remotely come close to matching the Queen Diva herself.