Calls to defund the police have gained steam over the last weeks of protest across the U.S. following the murder of George Floyd by Minneapolis Police Officer Derek Chauvin. Police violence is an issue everywhere there’s a police force, because it’s not really an issue of a few bad apples.

The police system is itself built on violence, and many city budgets pay an enormous amount towards officers who don’t necessarily have much to do except drum up crime with broken windows policing and petty ticketing. In the last few weeks they’ve been needed to gas and shoot rubber bullets at peaceful protestors, but that kind of overtime won’t last.

Defunding the police might seem extreme, but a lot of people have gotten on board as they realize this would mean money for so many other crisis management services that don’t involve random people with six months of training carrying guns into sensitive situations.

The next mental hurdle people are trying to get over is giving up certain forms of entertainment. The show Cops was canceled. Numerous actors who have made money playing cops on TV or film have donated money, including the cast of Brooklyn 99. There are so many cop shows on air right now that venerate police or promote their point of view, making them seem like heroes.

In solidarity of #amplifymelanatedvoices we will be muting our content until June 7th to give access for Black voices to be heard so we can continue to listen and further our learning. #amplifyblackvoices pic.twitter.com/NO2KeQjpHM

Paw Patrol is a Nickelodeon cartoon that features a team of pups who deal with issues in their town, and their leader is a German Shepard named Chase, a police dog. The show posted a tweet about #amplifyblackvoices, which was an effort to make space for Black people to take over social media platforms and for everyone else to pull back. The tweet inspired some unexpected responses. 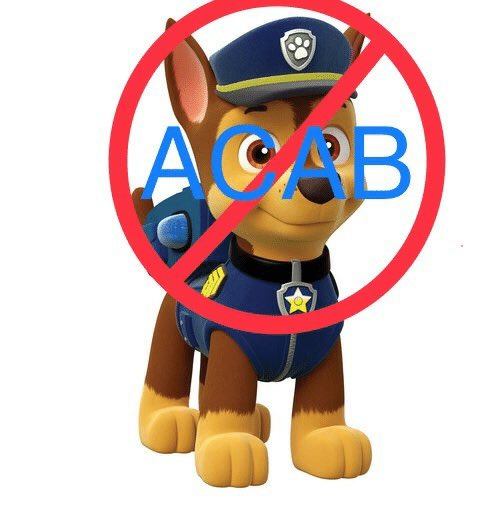 One was a post of a screenshot from the Onion from ages ago in which Chase is called out for police violence against a black labrador:

And the rest was full of memes about euthanizing the cartoon dogs or posting him with the phrase “ACAB” across his face. In some cases, it seems like people are joking, in others they’re quite serious. And there are other folks on Twitter who have been discussing how culpable Chase is for teaching kids that cops are good as long as they act nice, which can’t really be true in a system that is itself bad.

Some of these tweets are pretty funny, but the funniest stuff online might be the conservatives freaking out about anyone questioning Paw Patrol, like Ted Cruz:

It even got reported on Fox News. Honestly, if you’re more outraged about Paw Patrol being criticized than police killing Black people, you need a full television intervention.

When I say ACAB, yes that includes Chase from Paw Patrol

I do honestly want Paw Patrol taken the fuck off the air. My toddler is always begging to watch it and he thinks I’m a bad daddy because I’m trying to protect him from fascist brainwashing aimed at fucking toddlers

Y’all defunding & canceling shit like Paw Patrol & Cops… when we asked y’all to defund the POLICE!!!! Not these shows, the actual department. Lmaooo I’m fed tf up

“Come here, Chase. I have a new Paw Patrol suit I want to give you. It’s outback. Yep, right there behind that shed.” pic.twitter.com/QzD4MCgJP7

conservatives: the left is going to WAR against CUTE CARTOON PUPPIES

this week on Paw Patrol, Bobby the Bobcat eats too much catnip, so Chase shoots him 14 times in the chest

Fucks News reporting people on twitter denouncing the cop dog from Paw Patrol is reaching, even for them. pic.twitter.com/Gpl6YObimF

i hope the cop dog falls into a toaster