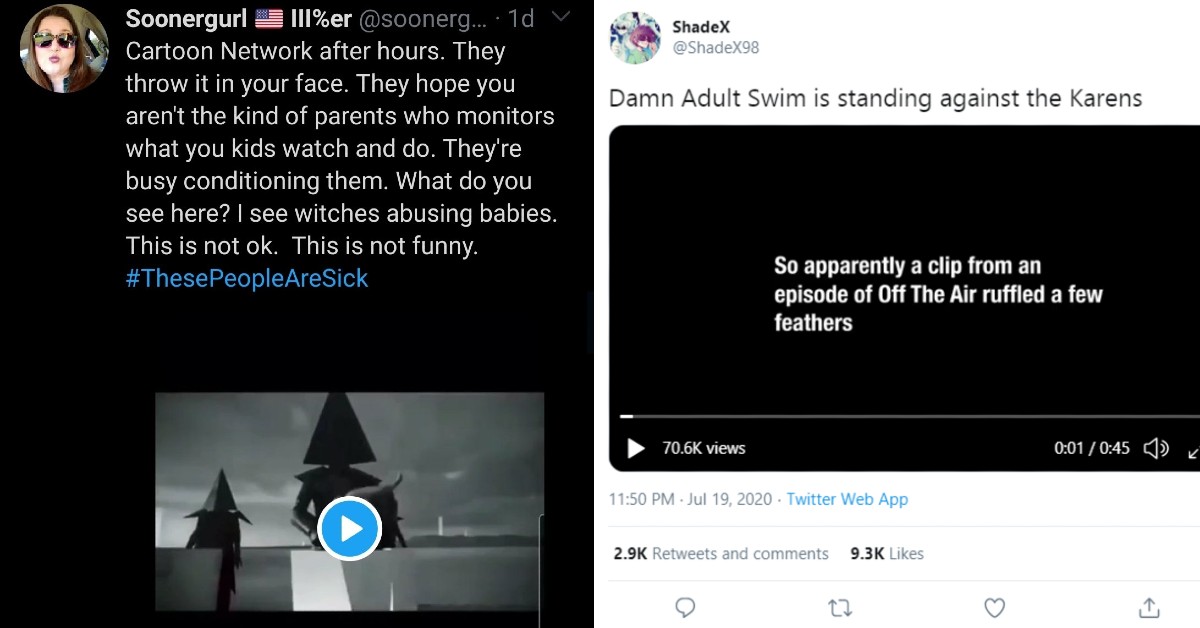 A woman on Twitter who goes by “Soonergurl III%er” is getting dunked on by every other adult in the room after complaining about “Cartoon Network after hours” in reference to a clip from the network’s long-running “Adult Swim” programming block. Adult Swim features TV shows made for adults that are notorious for being rather strange, often using heavy surrealism and experimental animation.

For a reason, Karen
As in, not for children, playtime is over, send them to bed pic.twitter.com/mdrmSrDjxx

Soonergurl viewed the brief music video featuring surreal figures using naked babies as drumsticks who laugh each time they strike the drum and saw “witches abusing babies.” It’s unclear what the triangle-headed figures are supposed to be, but in their defense, one reacts with clear distress when one of the babies cries, shaking its car keys until the baby starts laughing again.

Compared to some of the content that has come out of Adult Swim, the above clip is pretty tame. Regardless, the woman who posted it was quickly dunked on for failing to realize that Adult Swim is very explicitly for adults, plays late at night, and comes with many warnings against young viewership. It has also been around since 2001.

Her tweet and the general response to it gained so much attention that even Adult Swim responded to it, denouncing “Karens” who don’t properly supervise their kids.

Damn Adult Swim is standing against the Karens pic.twitter.com/GXD1FjhYPe

“Here’s a message to all the Karens out there,” the classic Adult Swim white text reads. “Parent your damn kids. Because if you let your babies watch our block then our witches will use them as instruments.”

It’s notable that the “III%er” in OP’sTwitter name refers to the Three Percenters, an anti-government, far-right militia group founded shortly after Barack Obama was elected president, ostensibly to protect gun ownership rights in the country. They have been listed by the Southern Poverty Law Center and the Anti-Defamation League as a dangerous group with strong white supremacist indicators.

This might help explain why so many people leaned in so heavily on the jokes about this hysteria around Adult Swim. Here is a selection of our favorites:

@ all you dumb parents concerned about Adult Swim pic.twitter.com/UxqTmwbN8v

Karens recently discovering Adult Swim and not knowing it's been around since 2001. pic.twitter.com/ggdvVLeBo4

Any other type of person: pic.twitter.com/uervwTMeKq

Me seeing a bunch of angry adults on Twitter suddenly upset about Adult Swim "poisoning children's minds after hours", as they apparently have just discovered it exists on the same channel as Cartoon Network, and didn't know it's been around since 2001: pic.twitter.com/wjokIteYWS

#Karens: how dare Adult Swim show my child this content it is irresponsible!!!!

Adult Swim at the beginning of their program: pic.twitter.com/0Duw90ogbA

Adult swim has always been for the kids pic.twitter.com/lJtMwcpxo0

is adult swim really trending because ignorant parents want it cancelled for being "not for kids" after it's been a thing since …. the late 90's???? pic.twitter.com/3soeAEwpFm

This basically sums up the whole Adult Swim “controversy” in a nutshell. pic.twitter.com/U4xEtH0r7M