Disney and marijuana usually don’t have a lot to do with each other, and the wholesome Disney brand probably likes keeping it that way. Recently, though, the two came crashing together in a really weird but totally delicious way.

A mom thought she was getting her daughter a Moana cake, but instead, she ended up getting a cake decorated with pot leaves.

Allow me to explain.

A woman in Milledgeville, Georgia called her local Dairy Queen to order a cake for her daughter Kensli Taylor Davis’ 25th birthday. Since Kensli loves Moana, her mom asked for a cake designed in honor of the Disney character. However, the people at Dairy Queen got confused and thought that she asked for a marijuana-themed cake, and so that’s what they provided.

Kensli shared the story on her Facebook, along with a photo of the pot-themed birthday cake.

I haven’t had a chance to tell y’all about our experience this weekend with my birthday cake. So my mama called and…

“I haven’t had a chance to tell y’all about our experience this weekend with my birthday cake. So my mama called and ordered me a cake telling them how much I loved Moana. (Because really I do) Well needless to say these people thought she said marijuana 😂😂😂”

“That ice cream cake was still good though 🤷🏻‍♀️” 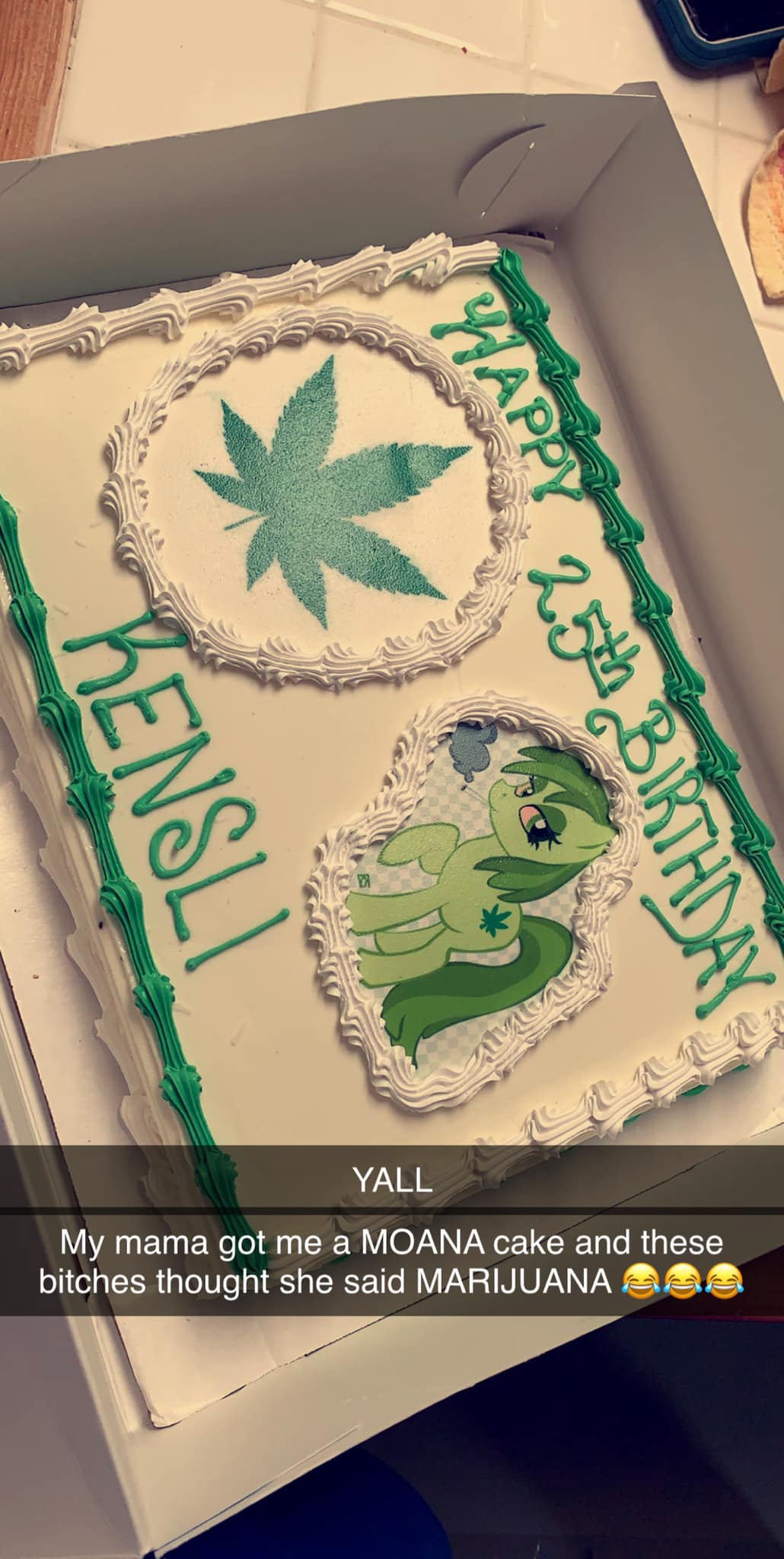 Kensli and her mom laughed off the mistake and enjoyed the cake. Kensli told Fox 35, “We weren’t mad about it or anything. We thought it was funny so we just ate it anyway!”

People online have gotten really into the cake, but there are still some lingering questions. For example, why did the cake designer choose to include a stoned My Little Pony character with bloodshot eyes and pot leaf tattoo?

I can understand the moana to marijuana, but where does the pony come from? Was the cake designer just like, yeah, those guys will love looking at this pony while they are high.

Other people have some more straightforward questions, mostly asking where they can get their own version of the cake.

If the cake is still available, may I buy it?

Now, did this cake have any special ingredients to go with its design? 😂

Unfortunately, the conversations around the cake aren’t all fun, games, and weed jokes.

The cake decorator who make the Moana/marijuana mistake lost her job over it.

Cassandra Walker designed the pot-themed cake and had been excited to see the customer’s face when she picked it up.

“Once I boxed up the cake, she walked it up for me and I kind of scurried up behind her. I wanted to see the customer’s reaction to the cake,” Cassandra told WMAZ.

She soon realized, though, that she had made a mistake. Another employee received the phone call with the order and told Cassandra to make a marijuana cake. Even though Kensli and her mom thought that the mishap was funny and they still enjoyed eating the cake, Dairy Queen fired Cassandra because of it,

“It was a mistake – it was a cake! I thought they would have said, ‘It’s a learning lesson and we’ll keep you.’ No, just a boot out the door,” Cassandra said to WMAZ.

Since then, a manager did invite Cassandra to come back to work, but she declined the offer. Hopefully she’ll move on to a place where her beautiful pot-themed cakes are truly appreciated.