When it comes to staying home with your kid all day long, there’s nothing better than using them to pull a prank on your significant other while they’re out. I mean, who needs to enjoy some “them time” when you can really just consume them with rage and fury and provoke a full-on mental break down?

One dad decided that it was the perfect time to pull a fast one on his wife, tricking her into thinking her shaved both his head and their son’s head. Whew, it got bad.

This wife was at work in a hospital when the father decided to give her a bit of a scare. He told his wife he can’t share photos of their baby because…well…he done f**ked up. 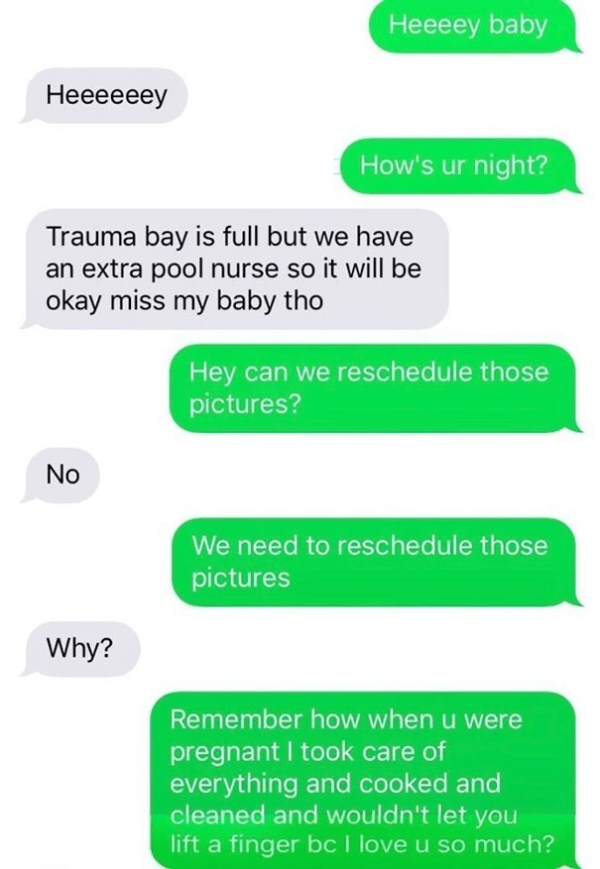 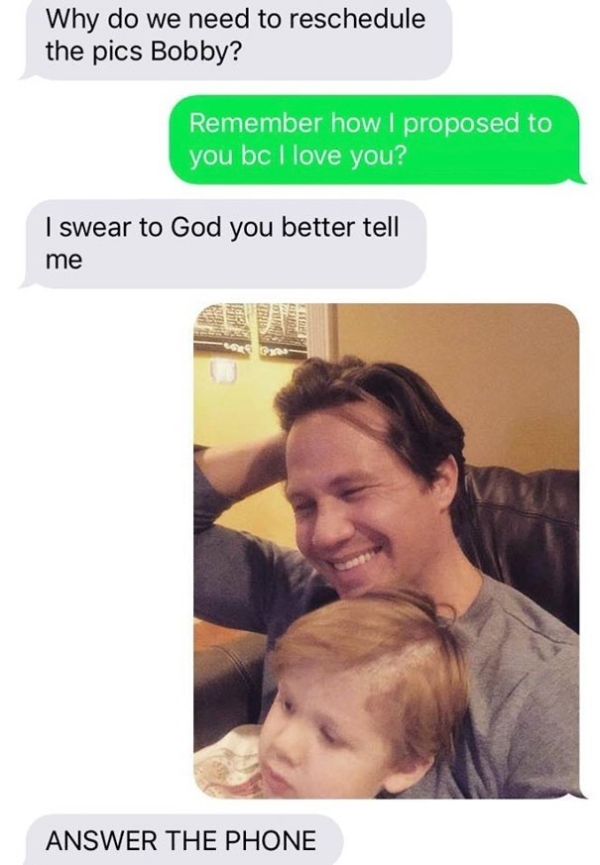 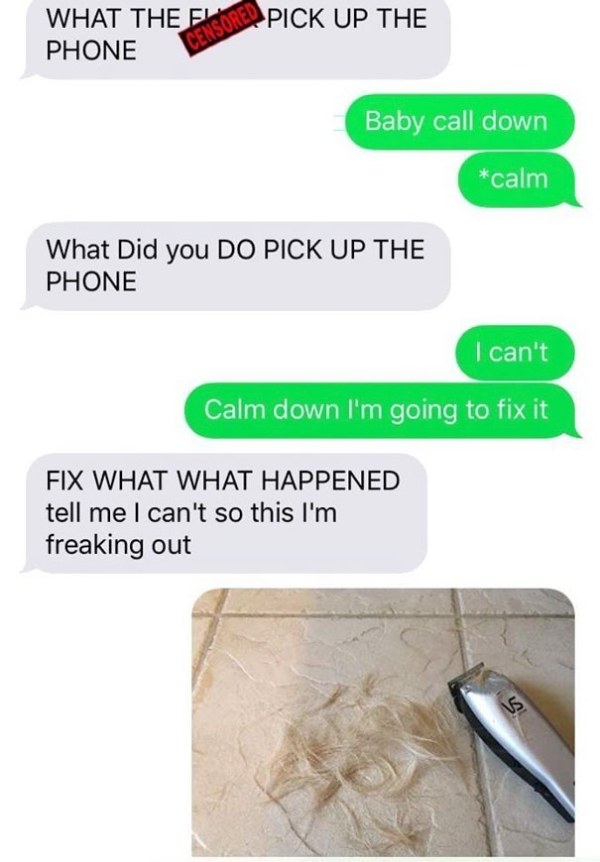 He started being super sweet saying he did all these sweet, nice things when she was pregnant, and how he loves her so much—just to calm her down. Then, he sent a photo of their son with part of his head shaved, saying their son got to the trimmer. 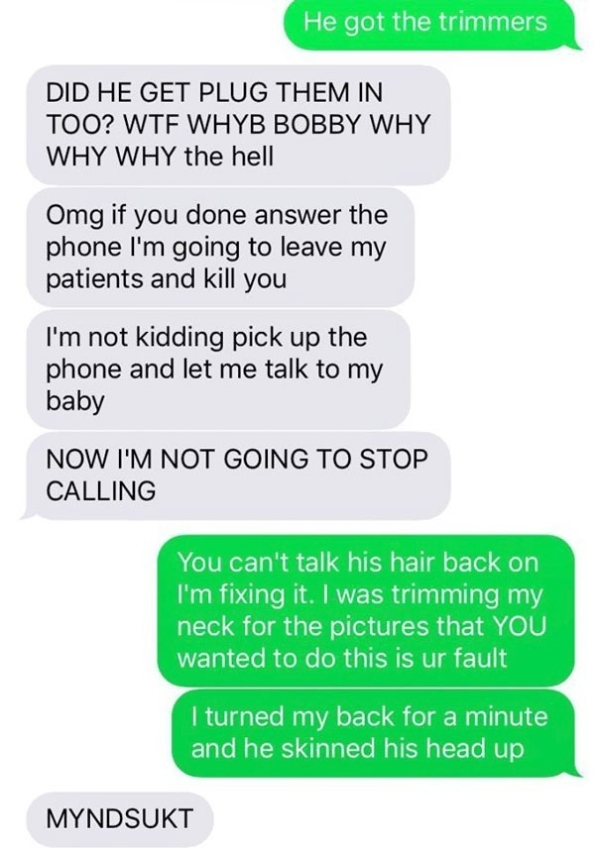 And, it got even worse. 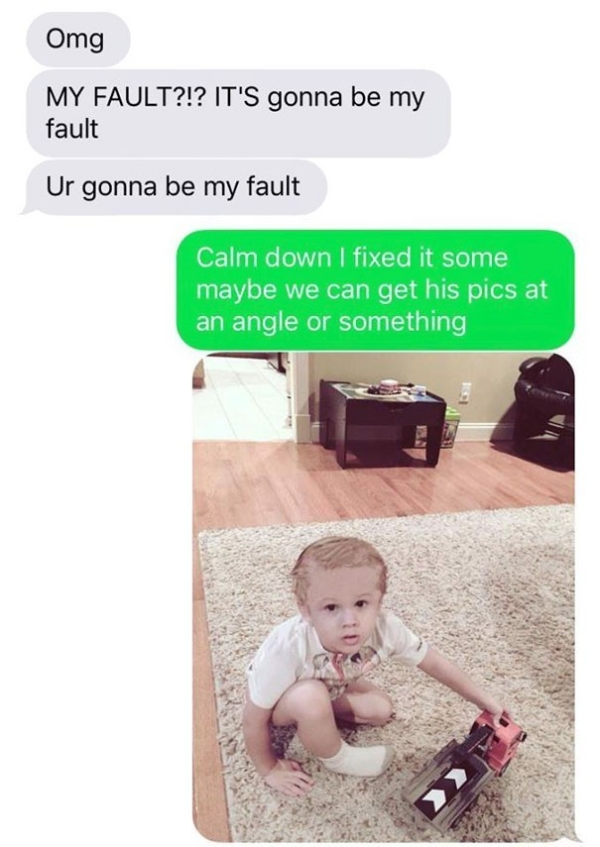 Then, the dad tried to blame his wife for messing up the hair further because she “kept calling him.” So, he sent a picture of the “final product.” 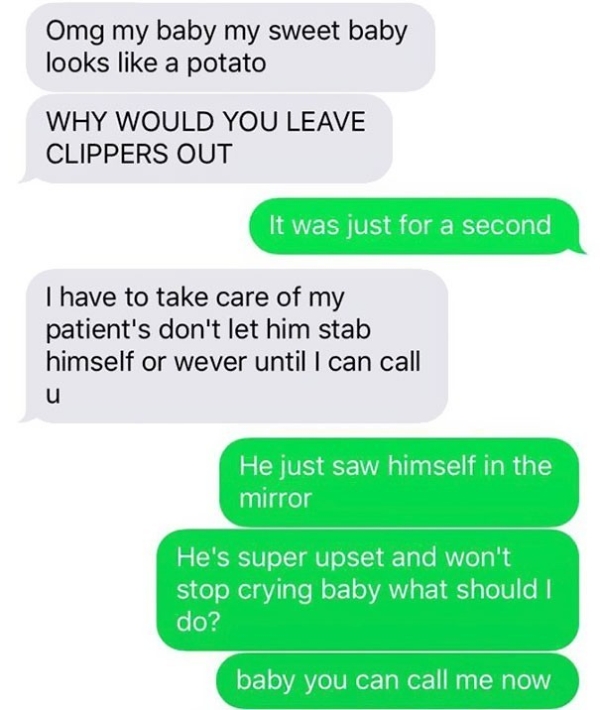 The wife lost it even more. But, after she left for a while, he kept upping the prank to get her even madder. 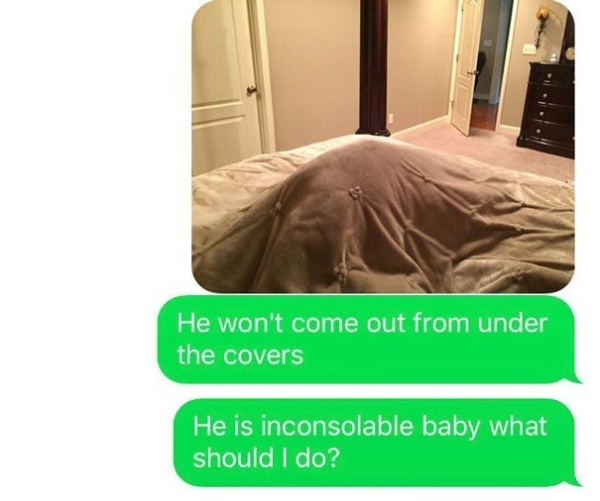 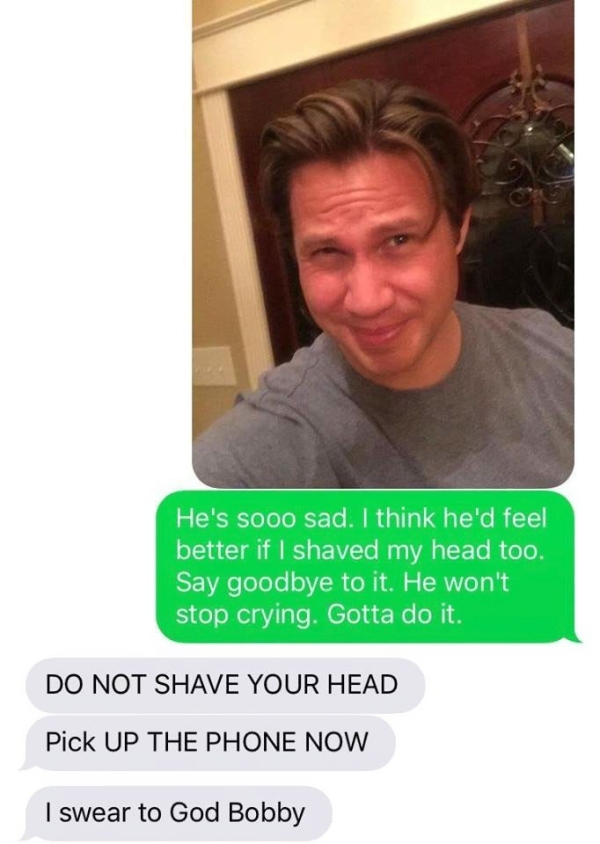 So, he decided to threaten to shave his own, glorious hair. Having a son with a bad haircut is one thing—but a son and a husband? This wife was going to go nuts. 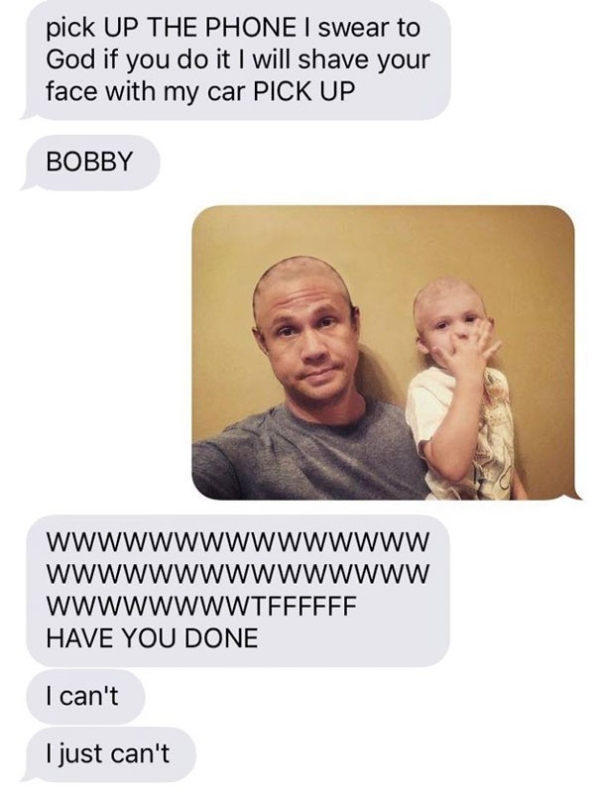 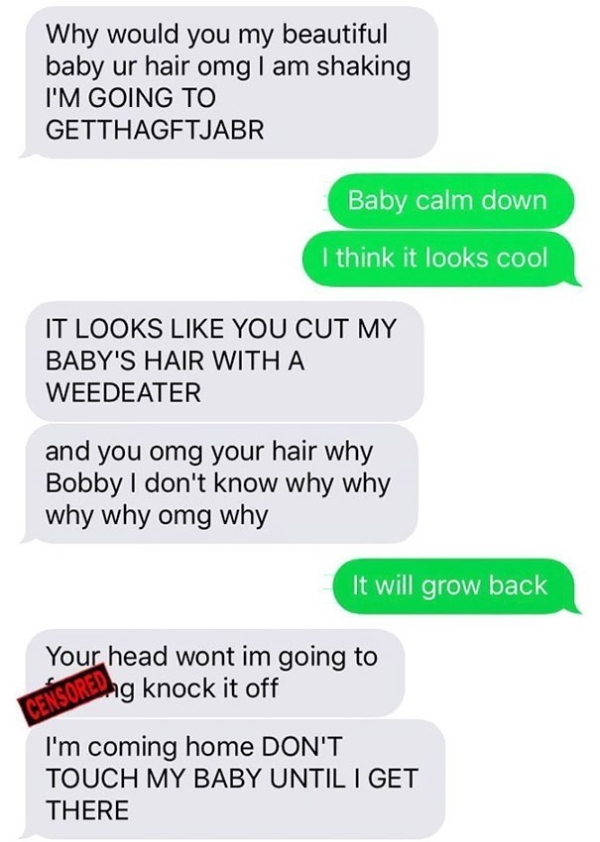 And, then, he sent the picture of all pictures. And just like that, his wife had a complete mental breakdown via text message. 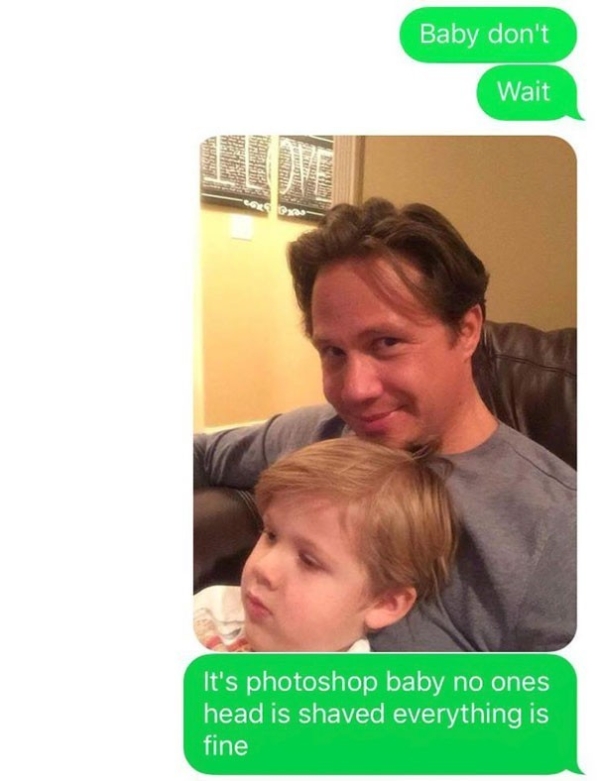 But, his wife said she was going to leave work and come home immediately, so he had to give it up that he completely photo shopped all of the pictures. 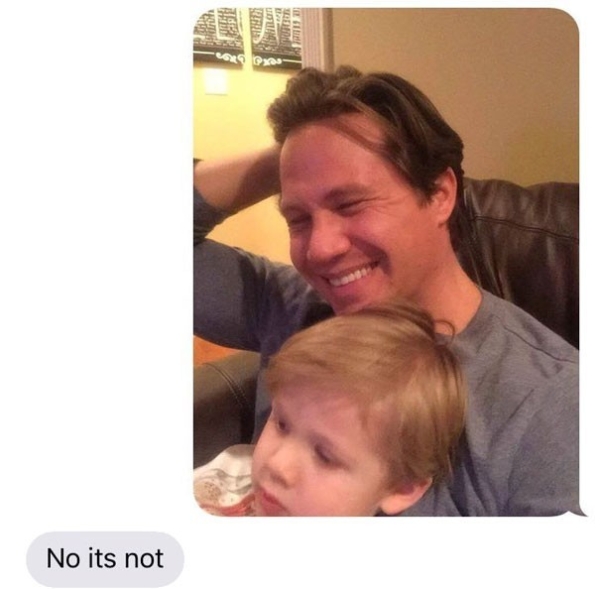 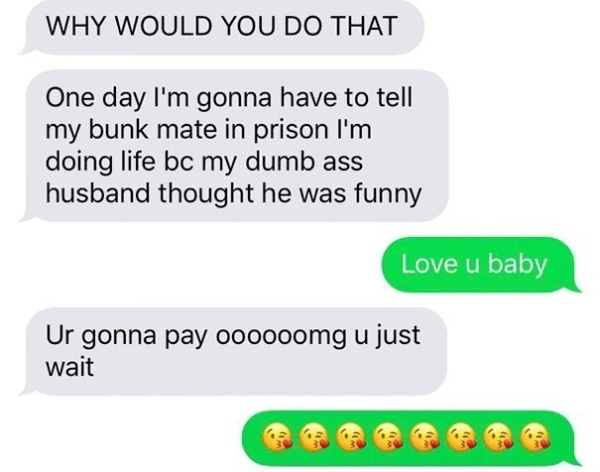 But, obviously, she was still pissed off that he gave her such a scare.

Whew—that was a ride. Note to husbands: Don’t try this at home.