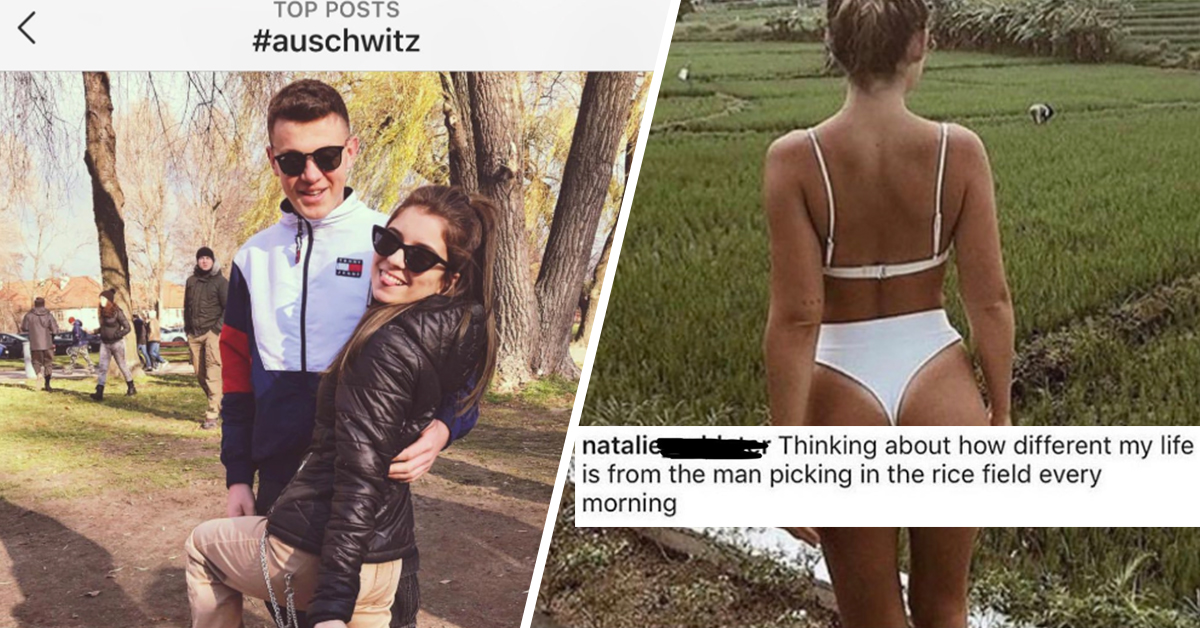 The world of Instagram influencers goes deeper than anyone could ever have predicted.

There are literally thousands of them, many making up to $80,000 for a single sponsored post. According to AdWeek, the industry has gone “from a rising marketing tactic to an essential part of most marketing budgets.”

Brands love bypassing native advertising on Instagram and setting up paid promotional relationships with influencers instead because, as The Atlantic put it, ads “aren’t as effective as influencer campaigns, where the personal touch resonates more deeply with consumers.”

So, Instagram influencers have an excuse to post tasteless ads on their social media. They get paid, and in the wise words of whoever said it first, don’t hate the player—hate the game.

1. The Couple That Wants You To Pay For Their Vacation 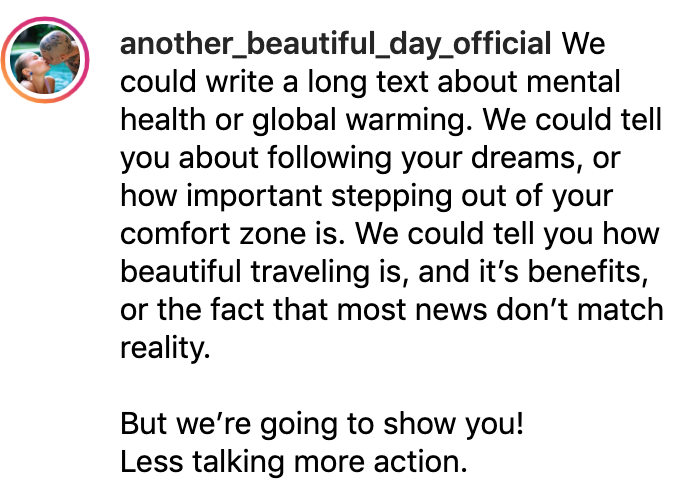 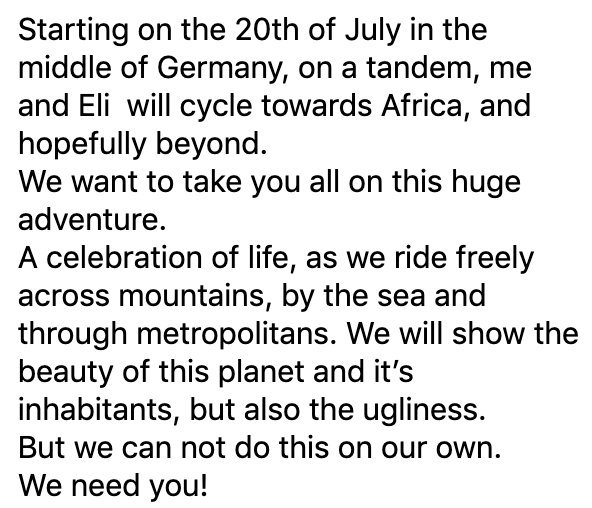 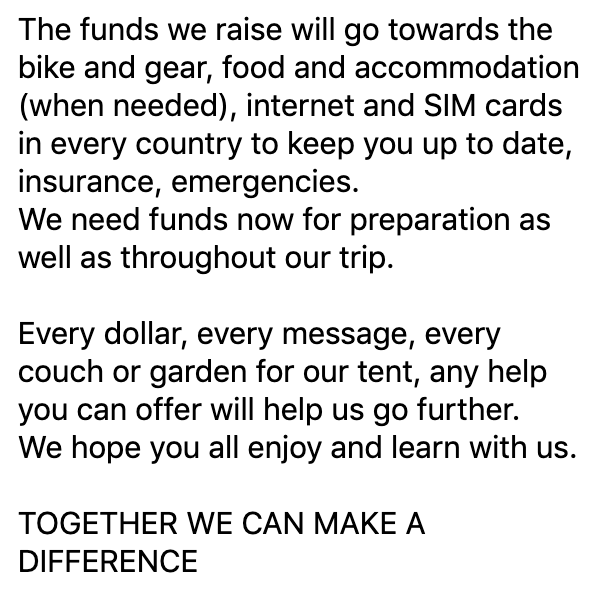 Catalin Onc and Elena Engelhardt run an Instagram account called Another Beautiful Day Official. In June, they decided they wanted their next beautiful day to be funded by their followers, and started a GoFundMe for about 10k Euros to support their cycling trip through Africa. The pair have been criticized for the financial support they receive from Onc’s mother, who works two jobs. In response to the criticism they’ve received, they said:

“Some will just tell us to get jobs, like everyone else and stop begging. But when you have the impact we do on others’ life, getting a job is not an option. We could model and make fast money, but we don’t want to advertise consumerism. A normal job at this point would be detrimental.”

2. The Woman Who Is Proud To Give Her Husband Sex In Exchange For Housework

influencers must be stopped pic.twitter.com/xFswU0iRhz

Twitter user @natmypresident shared this screenshot of a couple displaying some very bizarre sexual dynamics. The man is holding a board that reads, “Helping with housework so you can get lucky is called choreplay,” which might be the least sexy sentence ever put on a sign. Maybe they’re a domme and a sub? But it seems more like this guy doesn’t understand he should do housework because it’s actually his house. What they choose to do after is not for us to know.

3. The People Who Keep Jumping Into This Toxic Lake

There is a lake in the northwestern coastal region of Galicia, Spain, that is famous for its exquisitely beautiful turquoise water. Influencers cannot resist its siren call. The only problem is the water is contaminated from a World War II-era tungsten mine, where an iron manganese tungstate mineral was once harvested to make lightbulbs. The water may look pure and healing, but it actually causes rashes, vomiting, and a few hospitalizations. It just makes such a sweet pic!

Local activists have tried to get the government to post warning signs, to no avail. The yoginis keep on coming for a dip.

4. The Couple That Splashed Ass With Holy Water 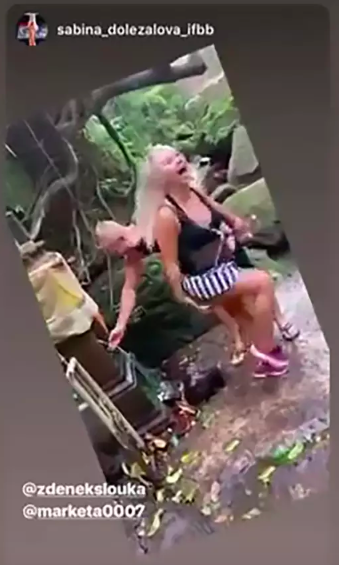 One of the number one rules of visiting a country is educating yourself about local customs. Bare minimum, do not desecrate holy objects. Czech couple Sabina Dolezalova and Zdenek Slouka threw the traveler’s rule book out the window when visiting a Hindu temple in Ubud, a town on the Indonesian island of Bali. The temple has a shrine of holy water.

In a video they posted to their Instagram stories, Dolezalova bends over in front of it, and Slouka splashes the consecrated water on her butt. Naturally, this act inspired outrage online and across Indonesia, which is a fairly conservative country. In her inevitable apology video, Sabina said:

“Because we had no idea that was some holy water or that there is a holy temple. We really didn’t want to do anything bad, we are so truly sorry. We hope you are going to forgive us and now we are just finding what we can do to fix it.”

You didn’t know?! Why on earth did you go there, then?

5. The Woman Who Had To Be Escorted Out Of A Botanical Garden By Security

This is an influencer who remains unidentified. That’s probably for the best (for her), because an image posted of her photoshoot to Reddit got people really steamed. The poster, u/Rainy_Day_May, said that the woman was stomping all over the conservatory garden in an effort to get her shot. She was told by staff to get off the display multiple times. Finally, security escorted her out and told her never to return. When you get banned from a botanical garden, it’s time to take a hard look at your life.

6. Kelly And Kody And Their Death Wish

The couple behind the Instagram account “Positravelty” caught a lot of flack for this scary image of Kody holding Kelly over the side of an infinity pool with a steep, deadly drop below her. Kody sure is strong and they both sure are stupid. Risking your life for likes is not only bad for you, it’s the wrong kind of influence to have. Popular accounts often have lots of copycats, and people dying while trying to get the perfect shot is not an uncommon occurrence. The couple even seems aware of how messed up this image is to promote, writing a kind of warning in the caption:

“Our greatest strength in life, our most important principle, is discernment. Only you can know your body, feel the space around you and understand your capabilities. We would all do well to remember this, knowing that not every action, style or path we witness through others is or should be, replicated. At the end of the day we are to hold ourselves accountable for the decisions that we make.”

Well, this picture was a bad decision, guys.

7. Everyone Who Trampled The Poppy Fields This Year

Nature makes a beautiful backdrop. Unfortunately, lots of influencers treat natural parks like they’re inanimate photoshoot props and not complicated eco-systems that need to be respected and preserved. This is a pretty common issue, but things got really heated in the Antelope Valley this year when a gorgeous “super bloom” had people trekking for miles to stomp all over the gorgeous wildflowers.

8. The Model Who Is Maybe Lying About Her Eye Color?

Sarah McDaniel is a model who is famous for a couple things. One, she models for the relaunched “no nudes” edition of Playboy. The other is her heterochromia, a rare condition which causes a person’s eyes to be two different colors. She became famous for talking about her condition under the Instagram handle @krotchy, but became the target of a lot of harassment as people began questioning if her heterochromia was real.

The worst part is that a photo of her as a child was shared by her own dad online, and in it she appears to have two brown eyes. Honestly, it’s kind of a sad story, because it implies some nasty family dynamics. A dad should support his daughter’s weird eye color lie. McDaniel hasn’t changed her story, however, but she has changed her career. She’s now working on a CBD oil line.