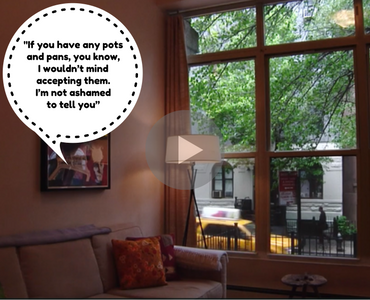 At just under eleven minutes, this video is a bit on the longer side. At least as far as Internet attention spans g–Hey, where are you going? Get back here. Anyway, I can promise you the full eleven minutes of this video are worth it. Really what it is is a collection of voicemails two roommates and their cat, Casper, received from their landlord over the course of a one year lease. How is that interesting you say, well the landlord is clearly a little *cuckoo noise** and each voicemail seems to be more *cuckoo noise* than the last. I’ll let you get to watching and being thankful she’s not your landlord, but here’s the video’s summary from one of the tenants himself:

“Ahhh, renting an apartment in New York City – tiny, ‘challenging’ spaces coupled with enormous rents are to be expected. The most eccentric of landlords…directly above you…with an itchy speed-dial finger? – perhaps not as common. Told almost entirely through voice mail messages, “One Year Lease” documents the travails of Brian, Thomas and Casper as they endure a year-long sentence with Rita the cat-loving landlady. Sometimes the calls not coming from INside the house, BUT from the apartment upstairs, can be just as scary…or, well, just downright bizarre.”

Speaking of voicemails, Try Not To Laugh At This Girl’s Crying That Sounds Like A Drag Race.