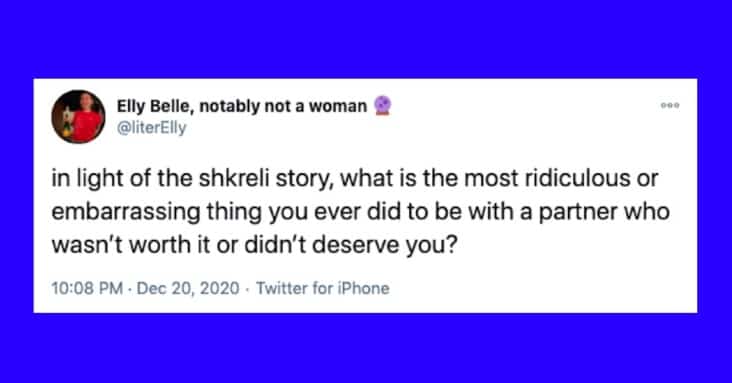 On Sunday night, an absolutely bananas story dropped on Elle.com and it has blown up the Internet. It revolves around a former journalist named Christie Smythe who claims she fell in love with infamous pharmaceutical fraudster Martin Shkreli while using him as a source for her writing. Shkreli first came to public attention when he jacked up a necessary HIV medication by 5,000 percent. He is now in jail.

In her interview with Elle, Smythe reveals that she left her husband, quit her job, and froze her eggs all for Shkreli. And at the end of the whole thing, it seems as though Shkreli has broken up with her and she is doing this interview and revealing her humiliation to either get his attention or make some money off her own story. It’s a train wreck.

It is also unsettlingly familiar. While Smythe’s situation is very, very extreme, many people knew what it was like to go above and beyond for someone objectively awful. Twitter user @literElly took the zeitgeist and asked their followers, “In light of the shkreli story, what is the most ridiculous or embarrassing thing you ever did to be with a partner who wasn’t worth it or didn’t deserve you?

The replies are tragic and funny at the same time. When you’re in love with someone terrible you can’t see the forest from the trees. When you finally fall out of love, you can see you weren’t in a  forest, you were in a garbage dump. Read these and try to hang on to this perspective the next time your personal Shkreli comes around:

Do her girlfriend’s homework so she’d have time to talk to me https://t.co/BgGQK3tq4P pic.twitter.com/uWKq8oj9Cm

This deadbeat I dated in my early 20s invited me over to “hang”, I took an hour bus ride from across town & by the time I got there he’d passed out & couldn’t hear me buzzing the door. So I climbed the walls and crawled in through a window. I should have left & never returned 🤦🏼‍♀️

I took a math class for an ex, like an in person college course. she got mad at me when I got a C, which in retrospect is ridiculous bc I never claimed to be good at math

convinced an ex to join me on a trip to alaska, only to be dumped again halfway thru & still stuck with him for 3 more days, pretending I was totally fine, instead of just booking a different hotel to get some space

I was willing to move to FL?? No job?? No friends?? No nothing except some (not even good!) dick?? pic.twitter.com/ZcHejRUWeS

I listened to an entire ICP album from start to finish and made up compliments about it so he’d know I really paid attention to the lyrics. It haunts me to this day.

Taking a bus every other weekend to visit him on his campus, where I had to follow him everywhere because he refused to lend me his key or otherwise change his schedule for me, which meant waiting six hours to eat breakfast most days (and no he never came to visit me) https://t.co/y3Yvy7nOjr

I once cooked dinner for a man who then told me he had concerns about my weight (twice). Luckily, I realized he wanted me to supplant my sense of my worth with his, so I kicked him out, regifted the booze, and had some great leftovers.