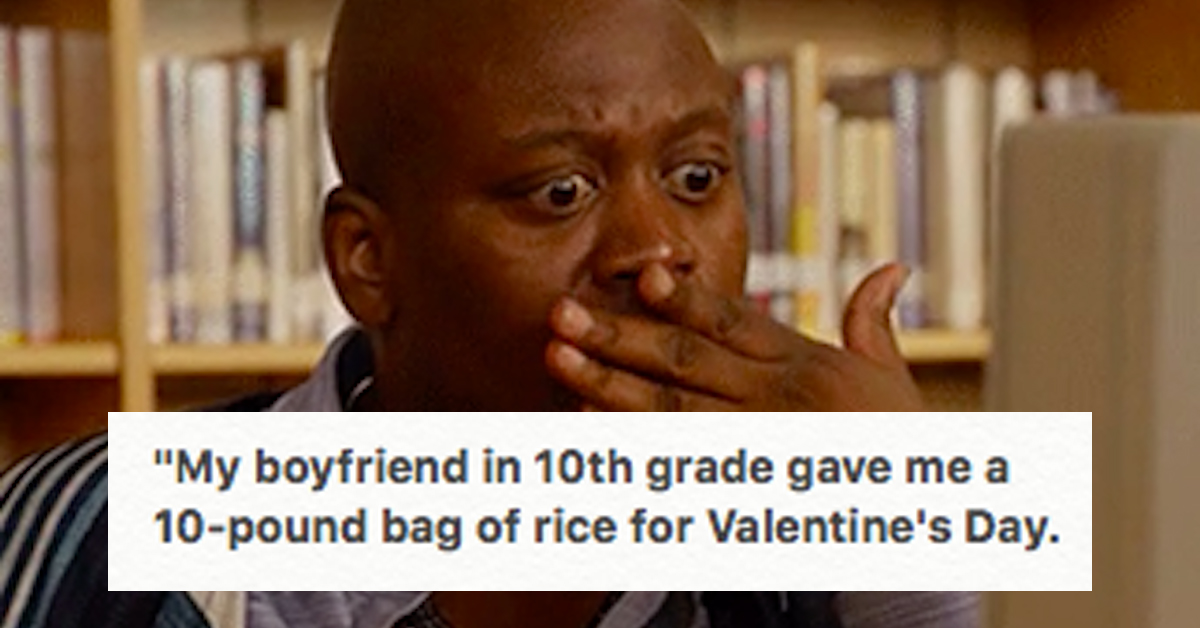 We might expect gifts from our co-workers or our great-aunts to be bad, but we hope that when it comes to our significant others, they’ll get the gift part right. After all, our boyfriends, girlfriends, husbands, wives, boos, honeys, partners, and any other word that fits are people who know us very well and who, hopefully, understand us.

Leave it to grandma to get us socks, what we want is the sweet, cool, funny, and maybe romantic stuff that we get from the people who are invested in us actually liking them.

That’s why it’s such a disappointment when someone you’re with gets you a terrible present. What does it say about the way they feel about you? What does it mean? Why would they give us this? Who in the world wants a snowglobe? (No one, that’s who, except maybe for someone who knits doilies.)

People were asked to share the worst gifts they ever got from significant others and hooo boy, maybe we’ll take those socks after all.

1. Nothing says “You mean so much to me” like a something you’ve picked up off the street.

“A rock he picked up on the walk to meet me. Not even a cute one. Just a regular rock.”

2. Or something you use while doing chores.

“My boyfriend gave me a feather duster for Christmas one year…that sh*t went straight in the bin and so did he.”

“For our two-year anniversary my ex-boyfriend gave me a $4 car air freshener.”

“For Christmas one year, my oh-so-loving husband gifted me a package of animal butt magnets. Eight magnets, just the backside?”

6. This one physically hurts.

“Two months after having a C-section my ex got me a toner belt. You know, the ones that wrap around your stomach and make your muscles contract. He excitedly handed it over CHRISTMAS DAY and couldn’t understand why I was crying.”

7. Maybe he’d rather be dating the guinea pig?

“For Valentine’s Day, he gave me treats for my guinea pig. Nothing for me.”

9. Nice to feel like a gift was chosen especially for you.

10. “Why don’t you give these to your new girlfriend?”

“After confessing to me that he’d been talking to another girl, my ex gave me a bag of peppermints that had been in his truck all day and were melted together.”

11. “Shortly after” was not soon enough.

“My high school boyfriend gave me his dead dog’s old stuffed animal for my 15th birthday. And he INSISTED that he bought it at Target, even though it had chew marks on it and its left eye was missing. We broke up shortly after.”

13. This one I truly cannot even fathom.

“My boyfriend in 10th grade gave me a 10-pound bag of rice for Valentine’s Day. He gave it to me early in the day and was like, ‘I was kind of tired of carrying it around.’ I donated it to the local food bank and we broke up soon after.”

“A condom. SMH…Needless to say we didn’t see each other after that.”

15. That’s quite a way to start your morning.

“My boyfriend got me a leather gimp mask/hood that literally covered the entirety of the face. I had never expressed an interest in trying something like that. I opened it before shooting out for work at 7 a.m. I was so confused!”

“For Valentine’s Day, I had a boyfriend give me a dying rose and a bottle of cheap lube so I could give him a hand job.”

“My now ex-husband gave me a set of ‘open everything’ scissors and a personal hair remover. For Christmas.”

19. This is the ultimate in tacky.

“He gave me a cheap, tacky necklace he stole from his mother. I know because I’d seen it in her house before.”

“A lighter…for Christmas. I don’t smoke.”