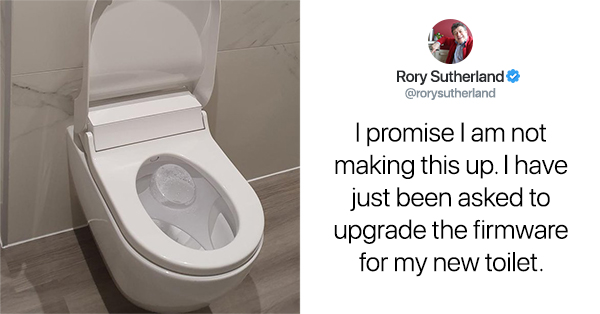 The advances in technology over the last few decades have been so rapid it’s hard to even keep track. That’s how we end up with fails like these.

In any event, one of our favorite new Twitter accounts, @internetofshit, curates the most pointless gadgets being “invented” today.

Enjoy some of the best:

Why use glass doors to see what’s inside a freezer when you can use a door sized screens to display pictures of what’s inside the freezer? 🙃 pic.twitter.com/WuL8uHGKRZ

I promise I am not making this up. I have just been asked to upgrade the firmware for my new toilet. pic.twitter.com/GqDmCk3AUz

Getting DDoS’d by my cats – whose dumb idea was this cat flap? pic.twitter.com/bRDWyJYr1o

My dad showed me how his Keurig has what is basically DRM and I immediately thought of @internetofshit. He circumvents it by literarily taking a used lid and placing it over the imposter. pic.twitter.com/nm8WWJqgEF

When you really want a cold drink but first need to debug a Security Certificate of your Samsung fridge. @internetofshit pic.twitter.com/o2ymgpeO3q

Just opted out of a McDonald’s ad on a TV I paid over a thousand dollars for. @internetofshit pic.twitter.com/q2STy45rYI

when you have to stomp out the face in the snow so your surveillance camera stops texting you @internetofshit pic.twitter.com/hW2vJmXGhD

This self-driving garbage can remembers to take the trash to the curb for you https://t.co/b3zzROcSfT pic.twitter.com/zrnL0WQCDh