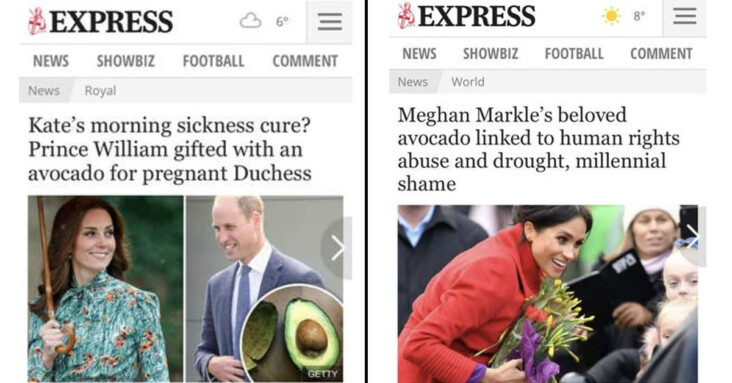 The Duke and Duchess of Sussex aka Prince Harry and Meghan Markle stepped back from their royal roles in 2020 after saying Meghan was getting unfair and biased tabloid coverage. The couple started a new chapter of their life away from their royal past.

By comparing different UK news outlets, it’s easy to see the difference in coverage between Meghan and Kate. The women frequently are covered with different opinions for doing the same actions. Kate’s fashion choices are praised, while Meghan’s similar choices are criticized.

Many people have attributed these differing opinions to racism in outlets and within the royal family. Meghan even confirmed some of these suspicions in an interview with Oprah.

It’s pretty easy to see the women are not being treated the same. Here are the most shockingly different headlines from different media outlets.

Kate: “Bumping along nicely! The Duchess was seen placing a protective hand on her tummy as she exited the event.” Daily Mail: March 22, 2018
Meghan: “Personally, I find the cradling a bit like those signs in the back of cars: Baby on Board. Virtue signaling, as though the rest of us barren harridans deserve to burn alive in our cars.” Daily Mail: Jan. 26, 2019 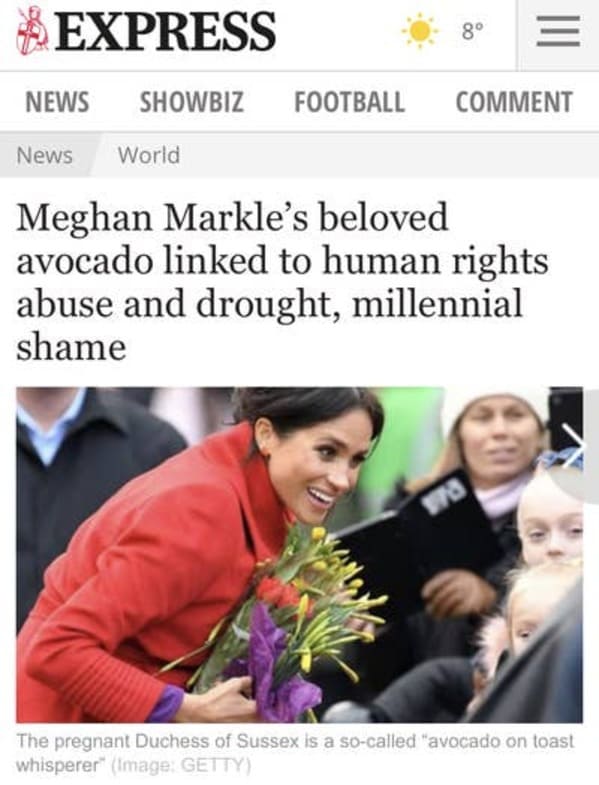 Kate and William: “Prince William was given one of the green fruit – wrapped up in a bow – by a little boy who’s mother is suffering during her pregnancy too… ‘He said he’d take it to [Kate] and see what happens – and said good luck for [the boy’s] mummy.'” Express: Sept. 14, 2017

Meghan: “The pregnant Duchess of Sussex and so-called ‘avocado on toast whisperer’ is wolfing down a fruit linked to water shortages, illegal deforestation and all round general environmental devastation.” Express: Jan. 23, 2019

3. When they decided to spend the Christmas with in-laws.


Kate: “Royal sources said yesterday that the Queen understood and endorsed William and Kate’s decision not to spend Christmas Day with her. One said: ‘Her Majesty understands that it is a dilemma that many young couples face and acknowledges how close Catherine’s relationship is with her family.” Daily Mail: Dec. 16, 2016

Meghan: “The fact is the Queen expects to have the family around her for the festive season… to the Queen, for whom the tradition of the family gathering is a key date in her calendar, Harry and Meghan’s absence will be a matter of great sadness. It will also be a source of frustration.” Daily Mail: Nov. 13, 2019 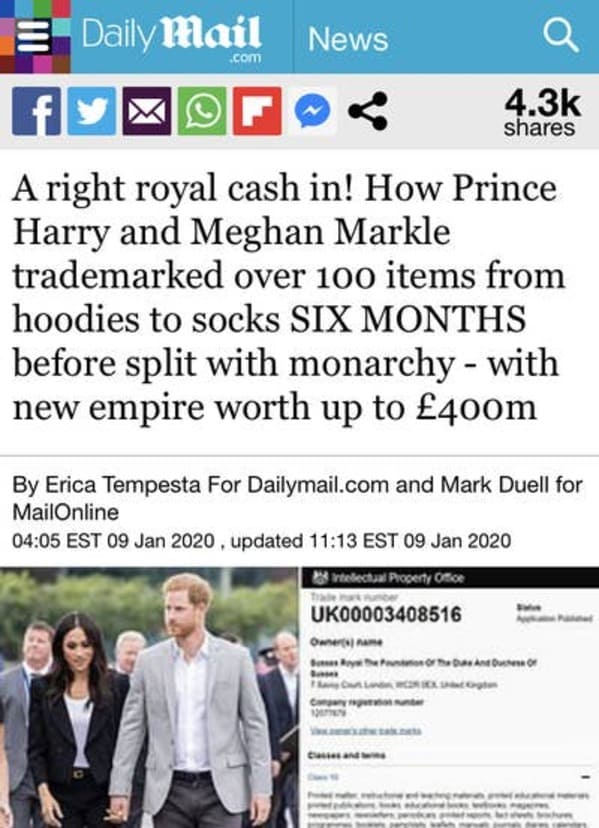 Kate and William: “Creating their own companies will allow William and Kate to bring out, should they ever chose to, myriad items of officially-endorsed merchandise from tea towels to coffee cups… Kensington Palace officials said they were doing the ‘sensible thing’ in protecting the couple’s rights.” Daily Mail: Jan. 17, 2014
Meghan and Harry: “The Sussexes want to stamp their name on dozens of products including T-shirts, hoodies, journals and gloves for their newly-created foundation Sussex Royal… Experts said Harry and Meghan were actively preparing to quit the Royal Family months ago by filing trade mark applications to commercially protect their brand.” Daily Mail: Jan. 9, 2020

5. About the royals “stiff upper lip.”


Kate and William: “Prince William yesterday backed brother Harry’s brave admission of his mental anguish — and blasted the monarchy’s ‘stiff upper lip’ tradition… William said: ‘There may be a time and a place for the ‘stiff upper lip’ but not at the expense of your health… ‘

“‘Catherine and I are clear we want both George and Charlotte to grow up feeling able to talk about their emotions and feelings. Over the past year we have visited a number of schools together where we have been amazed listening to children talk about some quite difficult subjects in a clear and emotionally articulate way, something most adults would struggle with. Seeing this has really given me hope things are changing and there is a generation coming up who find it normal to talk openly about emotions.’” Sun: April 19, 2017

Meghan and Harry: “Meghan Markle and Prince Harry have bucked royal tradition once again with their latest TV interview — in which they claimed they were ‘existing, not living.’ The couple ditched the stiff upper lip of previous Royal Family generations and flew the flag for ‘Generation Therapy’ as they revealed their emotions to the world – but were they right to do so?
“What you make of ‘fragile’ Prince Harry and Meghan’s comments may depend on your generation. Sunparents and kids reveal what they think of the Duke and Duchess of Sussex airing their emotions in public – and whether they have the right to moan in such positions of privilege…” Sun: Oct. 23, 2019

6. Their choice of scents. 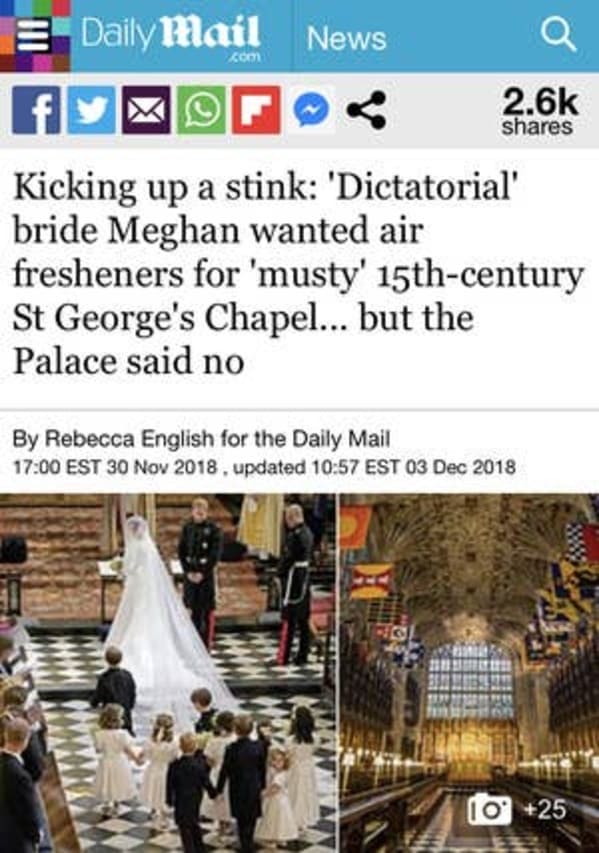 Kate: “It was reported that new Duchess of Cambridge requested her favorite scented candles and toiletries from luxury fragrance brand Jo Malone be delivered to scent the Abbey. A selection of candles, handwashes and lotions was requested, specifically in citrus spring scents including Orange Blossom, Grapefruit and the ever-popular Lime, Basil & Mandarin.” Daily Mail: May 4, 2011
Meghan: “‘Meghan wanted staff to go around with these atomizers, like spritzer guns, and spray the chapel with scent before anyone arrived. Royal Household staff stepped in and told her office politely, but firmly, that this was the queen’s chapel and it simply wasn’t appropriate. I don’t believe they said no because they thought it could affect the chapel in any way. It was simply the principle of the thing. This is a place that has held royal weddings, funerals and even contains the royal vault. I don’t believe a request of that nature had been made before.'” Daily Mail: Nov. 30, 2018 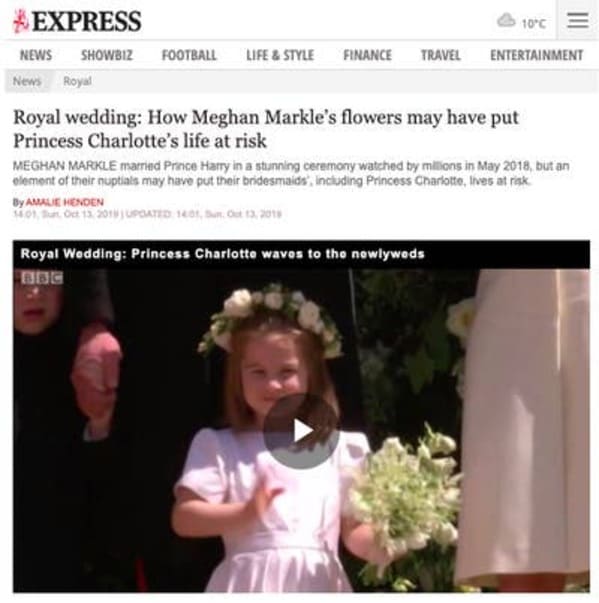 Kate: “As far as bridal bouquets go there was nothing particularly regal about Kate Middleton’s modest arrangement of simple, seasonal flowers. Like the bride herself the bouquet was effortlessly elegant and understated.

“Yet behind that modest posy lay a secret story. Kate, the commoner-turned-duchess, had painstakingly selected blooms with real meaning. She is evidently well-versed in the language of flowers, a little-known romantic relic from the 19th century.

“Hence the use of lilac in her bouquet, which signifies the first emotions of love, the lily of the valley meaning a return of happiness, hyacinth standing for constancy, myrtle meaning love and the ivy, which represents fidelity. Then of course there was the suitably named Sweet William, which is shorthand for gallantry.” Express: Aug. 29, 2011

Meghan: “[Meghan Markle] was holding a wedding bouquet which flowers were replicated in Princess Charlotte and the other bridesmaids’ flower crowns. Express.co.uk can now reveal the children’ crowns were made of flowers that can be deadly, especially for children. Meghan’s bouquet was made of forget-me-nots as well as sweet peas, lily of the valley, astilbe, jasmine, and astrantia…
“Lily of the valley is a highly poisonous woodland flowering plant and ingestion could be deadly… As Meghan’s bridesmaids were so young, having this flower on their heads could be considered a dangerous decision. Other brides have also used this flowers including Kate Middleton, Princess Eugenie and Camilla, Duchess of Cornwall.” Express: Oct. 13, 2019

8. Accidental vs intentionally avoiding the Queen. 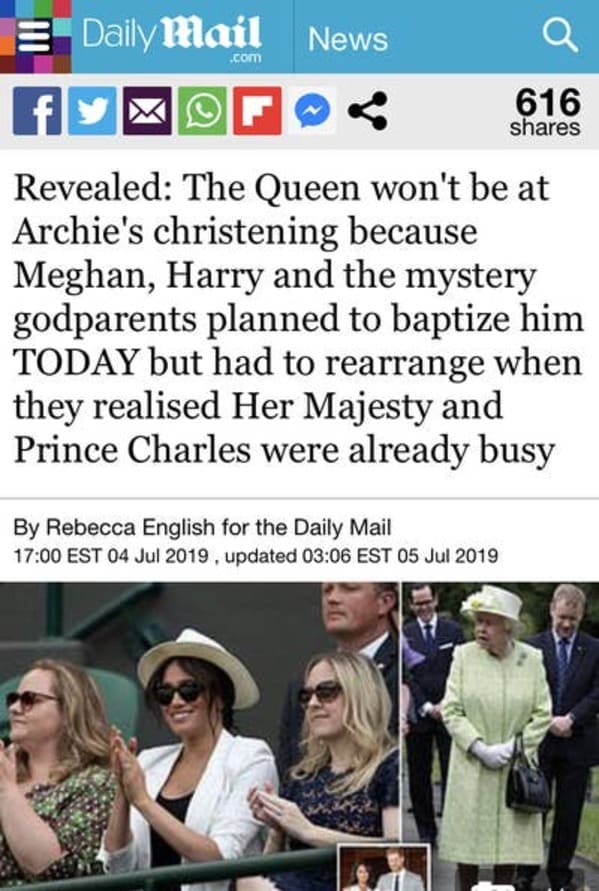 Kate and William: “The Queen and the Duke of Edinburgh missed the small family affair. The decision is understood not to have been taken on health grounds, and to have been mutually agreed by the Queen and the Cambridges some time ago. The Queen, 92, has a busy week ahead, with high-profile celebrations in central London marking the centenary of the RAF on Tuesday, and a visit by US President Donald Trump in Windsor on Friday.” Daily Mail: July 9, 2018
Meghan and Harry: “The situation has surprised some senior staff at Buckingham Palace, who feel that the duke and duchess should have planned the day better. ‘There is huge support for the couple in not wanting to conform to tradition. They are young, they are striking out on a different path from other members of the Royal Family and there is enormous goodwill for them. But they shouldn’t do that without regard for tradition,’ said one. ‘Her Majesty was already scheduled to be in Scotland for her annual Holyrood Week and had a prior engagement at the weekend. There is a feeling amongst some that they should have been more accommodating about the date.’” Daily Mail: July 4, 2019 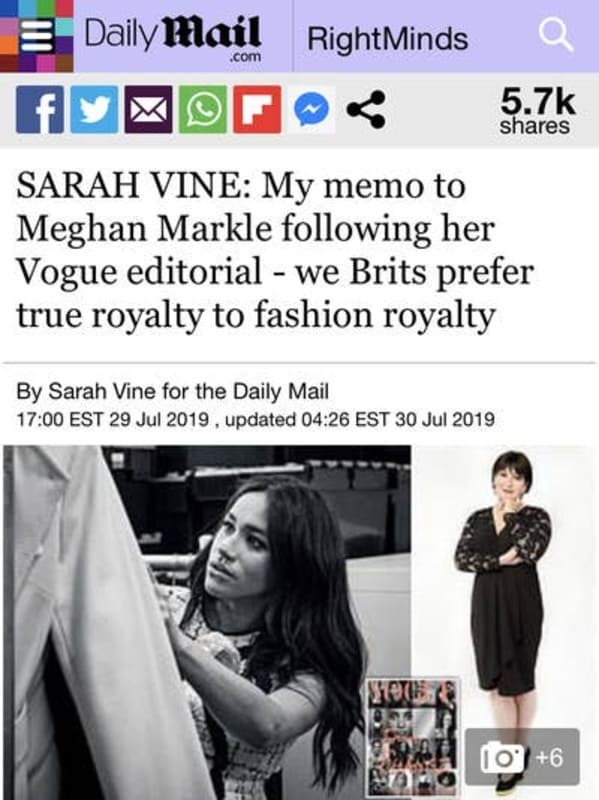 Kate: “We see a woman in her prime: stylish, confident and positively radiant, nailing outfit after outfit in the style stakes — and it’s a joy to witness… That old uniform of girlish dresses, tan tights and nude heels has been replaced by dazzling super-chic outfits to satisfy even the most exacting fashionista.” Daily Mail: June 16, 2019

Meghan: “Proper royalty is about tradition and duty, self-effacing service and loyalty — year after year after year, season after season… That is not to say that a monarchy cannot or must not move with the times — simply that it has to resist the temptation to be buffeted by passing cultural trends. Fashion is the exact opposite. And as fashion’s most famous bible, Vogue exemplifies the transient nature of the beast.” Daily Mail: July 29, 2019

10. Even their shoe choices.

12. They criticized Meghan when she didn’t wear a hat and not Kate. 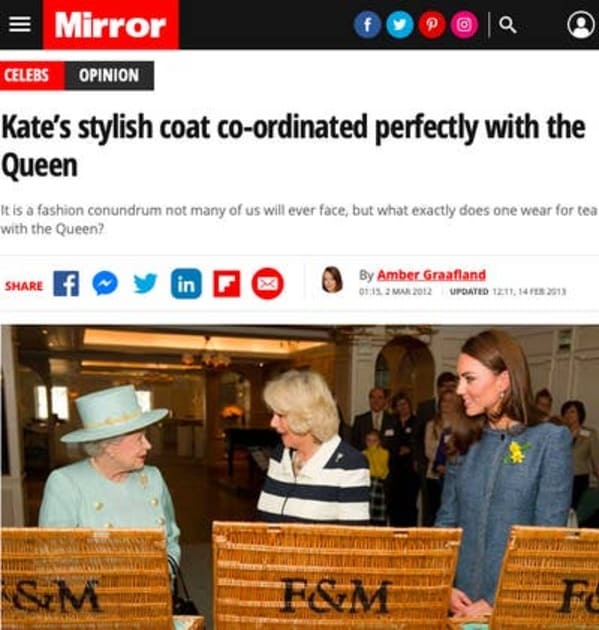 Kate: “It is a fashion conundrum not many of us will ever face, but what exactly does one wear for tea with the Queen? The Duchess of Cambridge met this challenge head on yesterday by co-ordinating her outfit with the Queen’s powder blue ensemble… The Queen, on her first ­official event to mark her Diamond Jubilee, was dressed in a pastel hat and two-piece coat dress with military-style rows of gold buttons designed by Angela Kelly. Looking relaxed and elegant, her outfit was perfect for what looked like a fun official engagement with the girls.” Mirror: Feb. 14, 2013
Meghan: “The Queen’s aides had told [Meghan] she would be wearing a green hat as a mark of respect to those who died in the Grenfell Tower fire. The Queen is said to have been ‘baffled.’ However, when Meghan turned up without a hat as she didn’t realize she was supposed to wear one too. A senior aide said: ‘I don’t think the Duchess fully understood. This was not a request. Those are for others to make, not the Queen.’ The Queen’s staff are said to have noted the Duchess’s mistake or ‘lack of deference.'” Mirror: Oct. 29, 2018