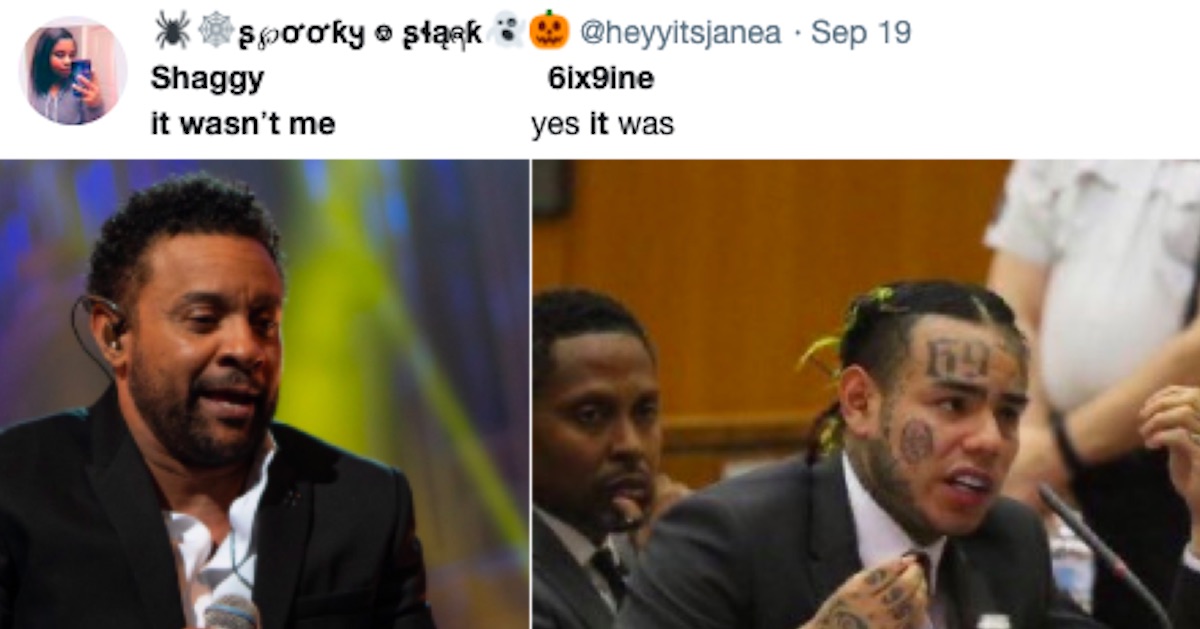 Brooklyn rapper Tekashi 6ix9ine is undergoing a trial in the case of the United States vs. Daniel Hernandez, which is his real name. 6ix9ine was picked up along with several other men under charges of racketeering, drug distribution, and conspiracy to commit murder, and is now testifying—mostly against his cohorts, it seems.

Vulture reports that he is mostly spilling secrets about Nine Trey Gangsta Bloods, a local crime affiliate with which he apparently has deep ties. And so does everyone else, according to him!

6ix9ine has been spilling the beans in an effort to protect himself and possibly get offered witness protection by the end of the trial. His lawyer is arguing that he cultivated the appearance of gang affiliation, but is not, in fact, a gang member. He is definitely not someone who holds strong against questioning. I don’t know what I’d do in his position, but the Internet does not take too kindly to snitches.

Tekashi 6ix9ine memes have exploded across Twitter, joking that 6ix9ine is giving everyone’s secrets up for absolutely no reason. Peter Parker, Spongebob Squarepants, John Cena—no one is safe while 6ix9ine is on the stand. He wants to share secrets no one has even asked for! Confession must feel very good if he’s willing to get mocked like this:

BREAKING NEWS: Tekashi 6ix9ine reveals that the identity of Childish Gambino is none other than the actor/comedian Donald Glover. More at 10. pic.twitter.com/fFSD2DqcHO

Judge: Are you done.

Judge: is that all ?#6ix9ine : Do you know who lives in a pineapple under the sea? pic.twitter.com/7DFsVml7nv

Might as well ask Tekashi 69 for the audio with Beyoncé, Solange and Jay Z in the elevator cuz we still wanna know.

BREAKING NEWS: Tekashi 6ix9ine just revealed what happened to Judy after she went upstairs after the 2nd season of Family Matters, and was never seen again.

Judge: You're still looking at 10 years.#6ix9ine: You wanna know what really happened to Wing Fingers? pic.twitter.com/AHqVepsrxg

Judge: is that all ?#6ix9ine : did you know that Miley Stewart is actually Hannah Montana ? pic.twitter.com/iEq0Ig70wf

That boy Tekashi69 is spilling the beans harder than Kevin! #6ix9ine pic.twitter.com/rK5qchB1TP

Im about to ask Tekashi if my man cheating on me.

Shaggy 6ix9ine
it wasn’t me yes it was pic.twitter.com/7rDDIAmEk6