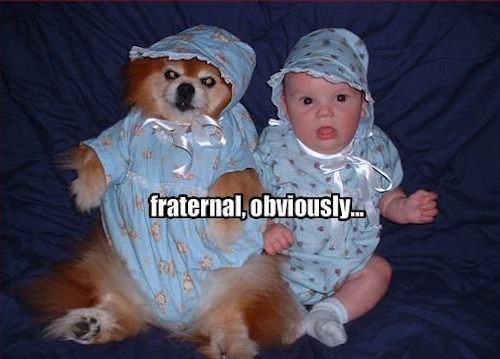 Is there anything more upsetting than when someone tells you they’re a twin only to be told moments later that they’re a fraternal twin? Let me answer that for you.

Allow me tell you a little story to help explain my frustration. When I was a young lad in my 20s, I was at a bar getting hammered with some friends, as young lads in their 20s often tend to do. One of my friends mentioned that her friend Danielle was gonna meet up with us and that she was bringing the twins. I was already a bit disappointed by the time I realized that this was not a euphemism for giant boobs, but I still thought it would be cool to hang with a couple of twins and ask them all sorts of questions about what it’s like to grow up with someone who looks exactly like you.

But then the twins arrived.

One was female. And the other was male.

Every question I had been ready to fire off was no longer applicable. How is that fair?

If you’re going to refer to yourself as twins, you should look just like each other. That should be the rule. (And don’t give me the whole opposite sex excuse. I mean, even Phil and Lil from “Rugrats” were pretty much impossible to tell apart without that damn bow.)

All I’m saying here is we should stop using the term twins unless they’re identical. It gets people’s hopes up, only to have them crushed (and by people, I mean me).

Hear me out here.

Identical twins have someone related to them who looks EXACTLY like them. That’s just plain awesome.

Meanwhile, fraternal twins have someone related to them who maybe only kind of sort of looks like them, and sometimes not even anything like them. Which is pretty much the complete opposite of exciting because well…

News Flash: We all have that. They’re called relatives.

Here’s a list of cool things identical twins can do:

Here’s a list of cool things fraternal twins can do:

All I’m trying to say here is, fraternal twins will never not be a huge letdown and will pretty much always ruin my week.

(If you need more angry ranting in your life, check out the time I went off on People Who Love Rain.)