With student loan debt set to reach $1.7 trillion in the United States in 2022, I hope one thing we can all agree on is that it’s officially a problem and one that could lead to catastrophe for the overall economy if not handled carefully.

Last week President Biden extended the freeze on student loan payments set to expire on May 1, 2022, to August 31, 2022, but some feel he could do more.

Specifically, advocates, student borrowers, and democrats are urging the Biden administration to cancel student loan debt altogether. Or at least cancel $10,000 per borrower, as he said he would do while running for President.

Now, there are logically sound arguments against both canceling and not-canceling student debt.

For example, some models suggest canceling student loans would disproportionately help those in the top 20% compared to the bottom 20% and that the government could better spend the money to fight inequality in other ways.

Conversely, some economists believe that loan forgiveness would also serve as a stimulus to the greater economy, because borrowers could then use that money for other purposes, such as buying a home. And that canceling the debt would help people of color most.

Those are well-thought-out ideas and healthy for the overall debate on the subject. But in an age where everyone has a hot take on everything, there are some pretty dumb arguments against canceling student loans, and they are as follows:

1. The “Everyone Needs To Do What I Did” argument:

This is insane. Imagine bragging about a daughter being forced to pay off student loans while dying of cancer. from LateStageCapitalism

While it’s understandable that you might feel bitter that a younger generation gets their loans canceled when you didn’t, I think it’s helpful to think about our values as a society and remember that, at least in theory, we want future generations to have it better than we did.

That’s not to say future generations should have everything handed to them, but ask any parent if they want their kids to have the same hardships they did, and I doubt many would answer in the affirmative.

Also, logically that’s like saying I used to have to use a rotary phone, so all millennials should have to as well.

2. The “I’m Not Babysitting Millennials” argument: 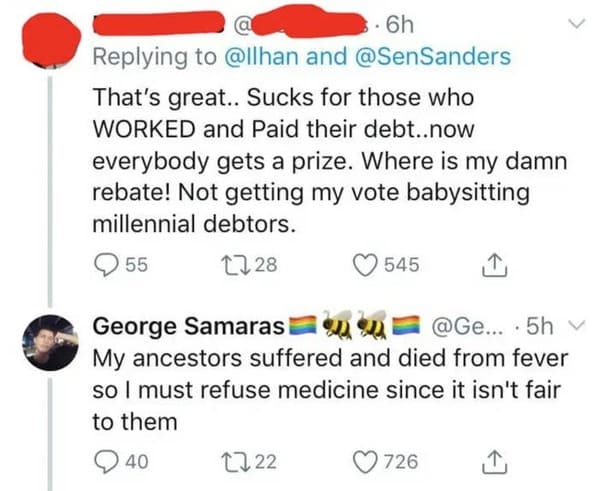 This is a variation on the “everyone needs to do what I did argument” but with the added kicker of not wanting to support what boomers and Gen X bias as “entitled millennials.”

One big problem here is that millennials don’t own the most student debt, Gen X does.

Also, Boomers (who still own 17% of current student debt, when most of them have been out of college for 40+ years) were responsible for the expansion of federal student loan aid, which economists argue was the catalyst for inflated college costs of the past three decades.

This is basically saying “I benefitted from something, passed the cost on to someone else, and fuck them I’m not responsible for helping fix the problem I caused.”

3. The “I Worked Through It 50 Years Before Student Loans Existed” argument: 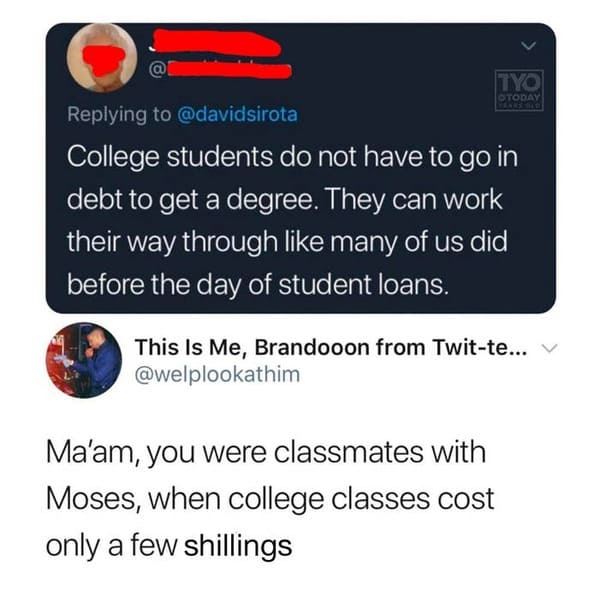 Yes, as it turns out, the college used to be a lot cheaper, even adjusting for inflation. But as mentioned, the reason college has gotten so expensive, and arguably out of reach for almost anyone trying to “work their way through,” was due to the advent of student loans, so this is kinda an apples/oranges argument.

4. The “Education Is Not A Human Right” argument: 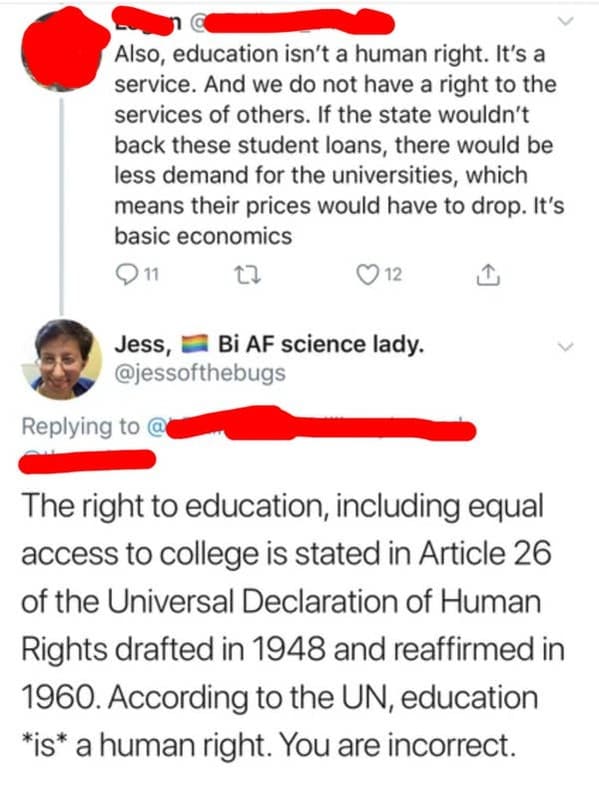 Sure, going to college isn’t an inalienable right, but that’s not really what we’re arguing about here is it? We’re arguing about student loans as they exist, and revamping the system. So this person’s argument could actually hold muster better after the loan crisis was dealt with, not before. 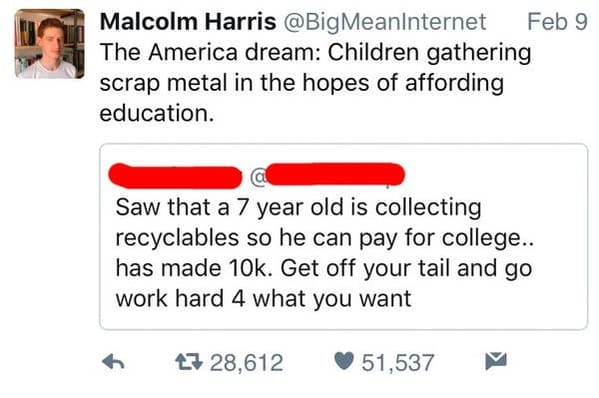 Hustle isn’t bad in and of itself, but hustle culture has become an easy go-to for avoiding answering difficult social and economic questions in a helpful way.

6. The “Next Thing You’re Gonna Tell Me HOUSING Is A Right Too” argument: 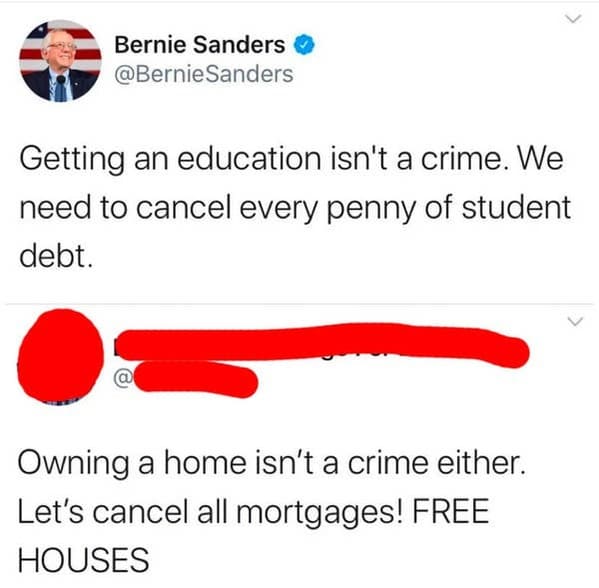 Be careful not to hurt yourself sliding down that slippery slope.

Also, it bears noting that when people did get royally F’d in 2007-2008 by the burst in the mortgage bubble, mortgages were canceled…by which I mean the government gave banks the money to cancel them, but then they still charged borrows the normal monthly rate and/or kicked them out of their houses.

7. The “If You Have Loans, You Shouldn’t Be Able To Vote” argument: 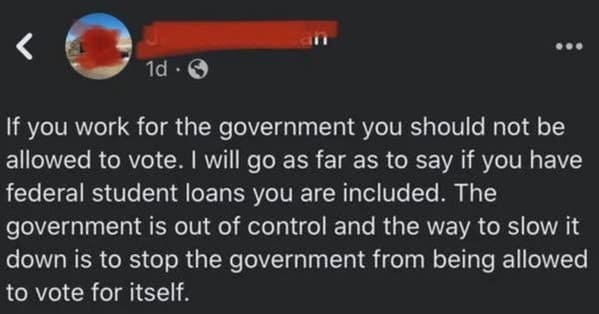 Anyone who could benefit from voting shouldn’t be allowed to vote, period. That’s definitely a smart thing to say and there are zero holes in that logic.

8. The “What’s Next, Forgiving Medical Debt? Education is a choice” argument: 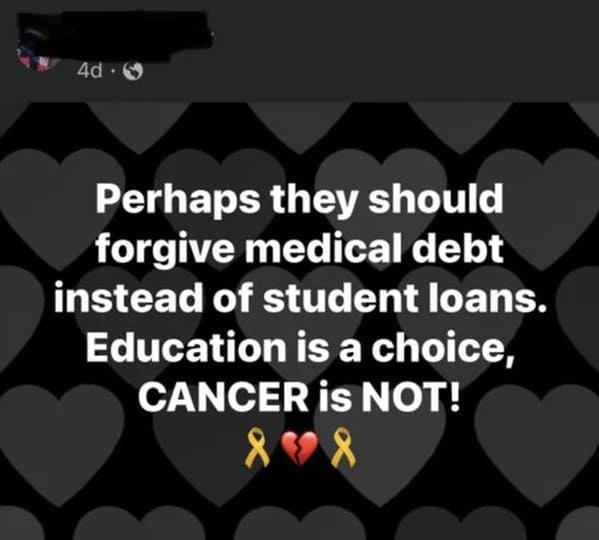 In fairness, it’s a fair argument that we could perhaps use the money for canceling student loans more efficiently, but the fact that education is a choice shouldn’t (and doesn’t) automatically mean canceling student debt would be a bad (or good) thing.

9. The “I Went To Ivy League Schools” argument: 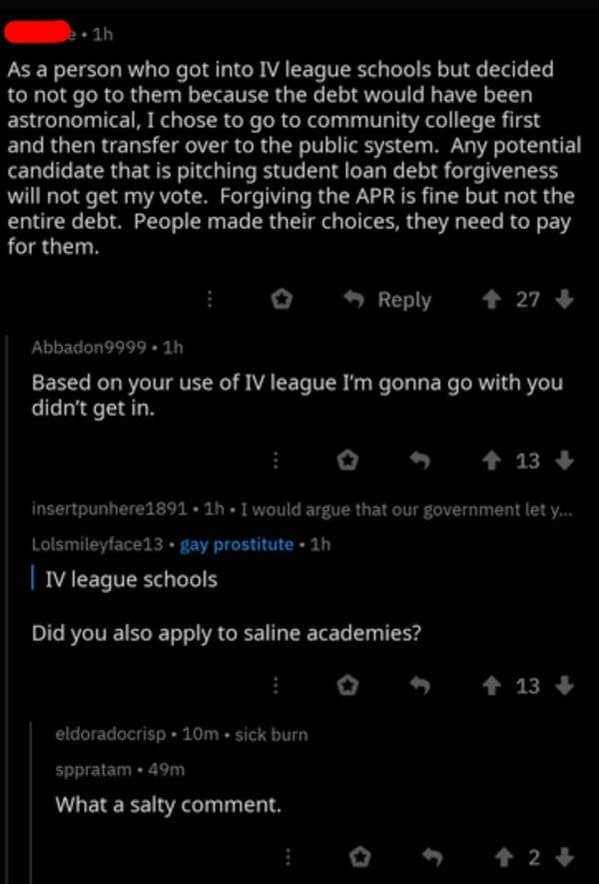 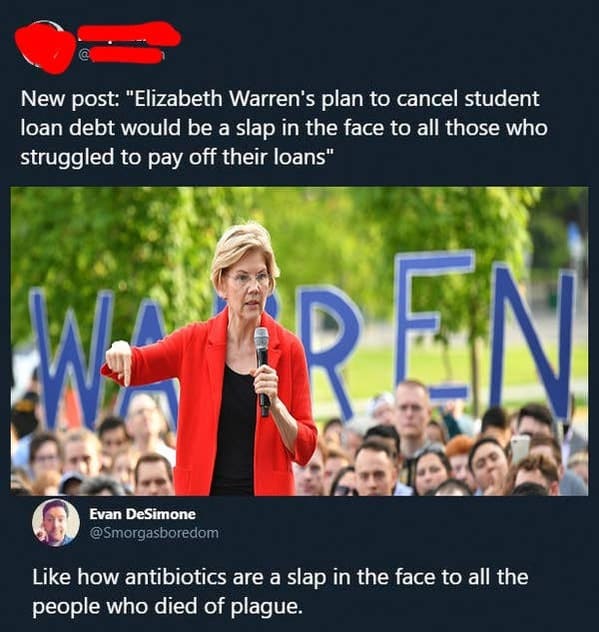 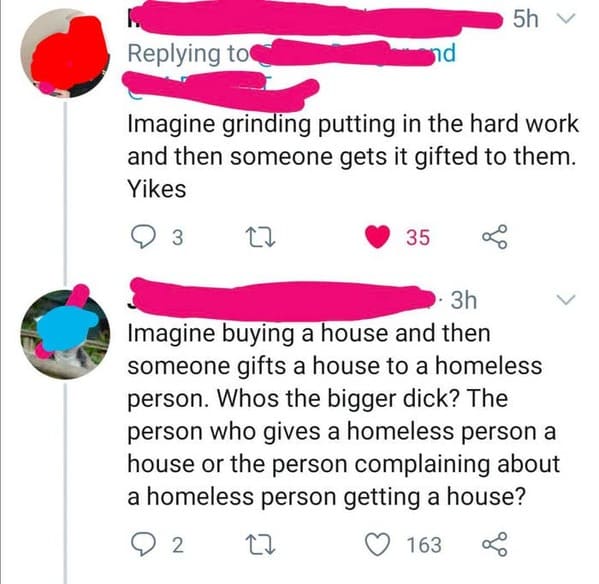 12. The “What About Doctors” argument:

13. The “Money Is The Only Reason A Degree Matters” argument:

14. The “My Bills Are MY Responsibility” argument: 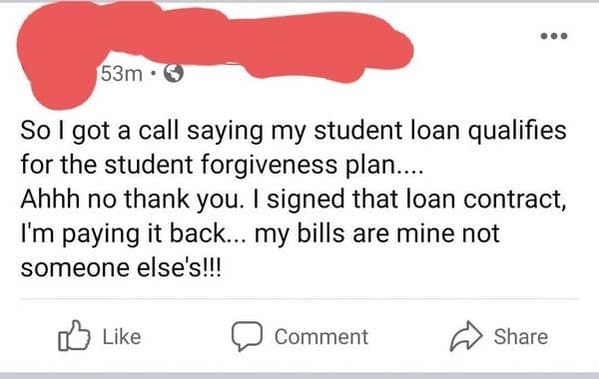 15. The “There Is No Economic Reason To Cancel Student Debt” Argument

As noted in the intro, there are sound arguments for and against canceling student debt, and declaring there’s no “economic reason to cancel debt” is the dumbest argument of them all.