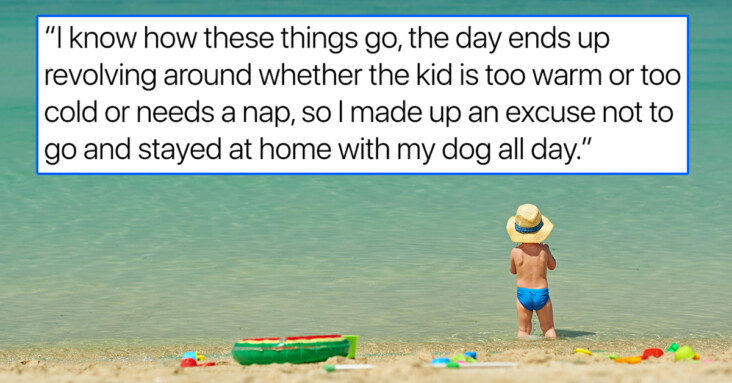 The Redditor who shared this story on r/AmItheA–hole is younger than the usual person who logs in to complain there, and his story is a perfect encapsulation of growing up.

Under the name u/BrightDuck6 he asked, “AITA For Canceling Plans Because My Friend Brought His Kid?”

The OP says he is 18 years old and he had a plan to go to the beach with friends to surf. Just before he left, his 17-year-old friend Jay messaged the group chat saying he’d be bringing his girlfriend Ellie and their toddler:

Honestly, I know how these things go, the day ends up revolving around whether the kid is too warm or too cold or needs a nap, so I made up an excuse not to go and stayed at home with my dog all day.

Unfortunately, Jay got suspicious. My mate “Tom” and I seem to have a habit of canceling whenever his kid is involved and he got offended by it. We have explained multiple times before that being around the kid makes us uncomfortable and that springing it upon us isn’t fair, but he was still pissed off we canceled short notice.

He said if we’re friends with him we need to be friends with his gf and toddler too. I have no issues with Ellie but I don’t want to hang out with his toddler all the time. I have nieces and nephews and kids just aren’t for me. AITA?

Man, it’s tough when the dynamics of a friendship change because one of you is in a different place in life. Obviously, Jay and Ellie are young parents and it’s probably hard for them to enjoy regular teen stuff while raising a baby.

But other teens are definitely going to find it even harder to go along with suddenly having a toddler in the midst of all their hangs.

The OP did add in an edit that part of the issue is that Tom is on the autism spectrum and “the toddler is allowed to pull our hair and put sticky fingers” in their faces, which Tom “can’t deal with that but the parents don’t prevent it.”

Most people didn’t really think that was the issue so much as the lack of communication:

But it then turned into an interesting debate about what we owe our friends in terms of compromise. If you want to stay friends with somebody, you adjust to meet them halfway:

Some people disagreed that anyone should compromise—sometimes friendships just run their course. It also doesn’t sound like Jay is really doing his part in terms of making concessions:

A lot of people were just sympathetic with the OP because they don’t like hanging with kids either, and they’re much older:

One person did give some advice to the OP that they seemed to take in about being compassionate for Jay, because he probably is fighting off the reality that having a baby means his life can’t be the same as it was:

He still doesn’t have to hang out with Jay and his toddler, but the OP can maybe talk to him now with a little more sensitivity. Not all friendships are supposed to last forever, but some can if you treat them with care.