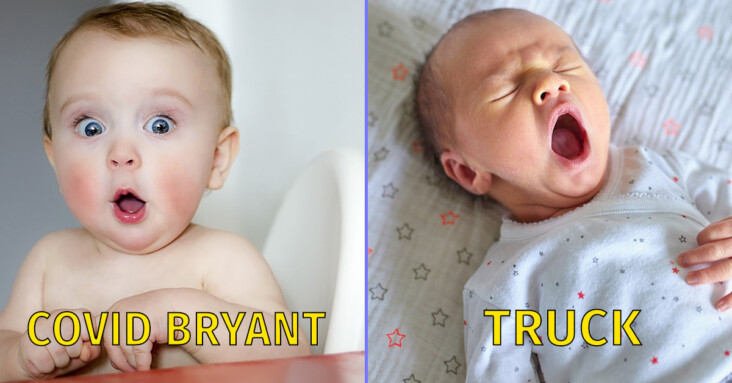 Naming a kid is serious business. New parents want to pick a name that is unique without being to strange but that the child won’t be teased for the rest of their lives about. Once you remove the names of all the people you don’t like, exes, names of dogs you’ve met, and celebrities that have a high chance of being cancelled, you aren’t left with very many names to work with.

Over on Reddit, someone asked, “Nurses and midwives of Reddit, have you ever tried to talk new parents out of a baby name? What was it?” The results were pretty astounding and people shared some bad baby names that should probably be illegal. 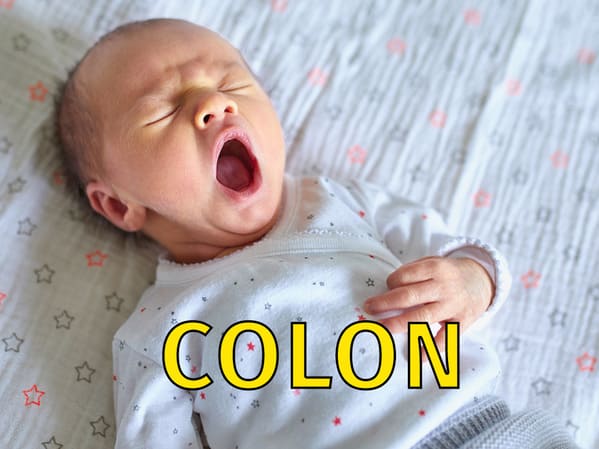 My classmate’s mother was a maternity nurse, and she once had a couple who wanted to name their son ‘Collin,’ but wanted to give him a unique spelling. So they chose to spell it C-O-L-O-N. They tried to name their son Colon — as in, the organ attached to your anus. When my classmate’s mother explained this to them, they were painfully embarrassed, and asked her to just use the usual spelling instead. I don’t think they’ll ever live it down –Skippyist

I had a coworker named Trina, and when she was pregnant, she told me that she and her husband decided to name their baby ‘Latrine.’ I had to explain to her that she was naming her poor baby after the hole in the ground that soldiers s**t into!”
“She was horrified, and changed it to ‘Katrina.’ Then, two days after the kid was born, Hurricane Katrina hit New Orleans –SpecificMost19

My boss’s friend named their kid ‘Monster Galileo.’ The nurse tried to talk them out it, but they insisted. The kid goes by ‘Galileo.'”
“Honestly, I kind of like the sound of it for an adult or a performer’s name, but being a kid named ‘Monster’ has to be rough in school –WeaselBit

My grandmother once put Virginia on a birth certificate when the parents had requested Vagina but didn’t know how to spell it. –stoneman9284

My kids have a friend in their class called Famous (male).-Miserable-Gur705

My mother wanted to name my baby brother ‘Ichabod Rusty.’ Our surname is ‘Ford,’ and she was determined to call him ‘Icky Rusty Ford.’ She tickled herself sh*tless through her pregnancy, but eventually my dad said ‘No,’ and they settled on something much more appropriate. –Omega12596

My husband wanted to name our son Truck . Almost ended in divorce. Needless to say, none of our boys are named Truck and we are still married –BB1429

I’m not a nurse or a midwife, but I was once paid to design birthday cards for a kid named ‘Mileage,’ pronounced My-Leige, like how you’d refer to a king. –JudgeJudyApproved

Back in 2000-2004 I worked at a hospital doing admin and an ol’ battleaxe of a senior midwife stomped over with this angry-looking pregnant teenager in tow.

“Varvara!” Old Battleaxe roared. “Varvara, open up that internetty-thing on your computer!”

“Show this ridiculous child the first picture that appears when you type in the word Chanterelle!”

The angry pregnant teenager whined about how it was a pretty name and loads of girls were naming their little girl it, and then went stone-dead silent when she saw picture after picture of nasty sulphur-yellow mushrooms sprouting out of muddy forest floors.

“Told you! It’s a [friggin] fungus!” Old Battleaxe roared, and stamped off to be Terrifying and Sensible at other pregnant teenagers, leaving me with the angry one.

Turned out that the name she had actually been thinking of was Chardonnay, which is both the name of very expensive wine and the name of a character in a UK soap opera called Footballers Wives, which was about as classy as it sounds.

The baby got that as a middle name later on, which was fine, the first name was Sophie or something along those lines. –Varvara-Sidorovna

My coworker went to school with a girl named ‘Fallopia.’ I feel sorry for her when she’s in biology class and they talk about Fallopian tubes. –NotMyKI

My ex wanted to name my son Jager (pronounced either Jagger or Yager) or Shotenjäger. That was a no.

Everyone talked me out of naming my daughter Evelyn (and nickname Evie – it’s a family name but apparently it’s for old women only lol). –tywy06

I used to work with youth who needed mental health support and I worked with 2 girls who had the following first names: Nawja (pronounced like nausea), & Cinnamon. I felt terrible for them. –driven_under666

Obligatory not a nurse or midwife.

Took a call at the call center once and this poor frazzled EMT told me that she was delivering a kid and the mom’s bowels voided, which is normal and apparently that’s called “miconium.”

She told her partner “Oop we got some miconium here” and the mom yells “Oh my god that’s such a beautiful name – you just named my baby!”

The caller said “Paul, I…I tried to tell her, but…there’s a kid running around named Birth S**t and I just don’t know how to handle being responsible for that.” –taintsrowthe3rd

As a Family Medicine Resident, I personally delivered two different girls named Khaleesi. This was around 2016, well before season 8. I imagine there might be some buyer’s remorse on the parents part at this point. –Herzeleid 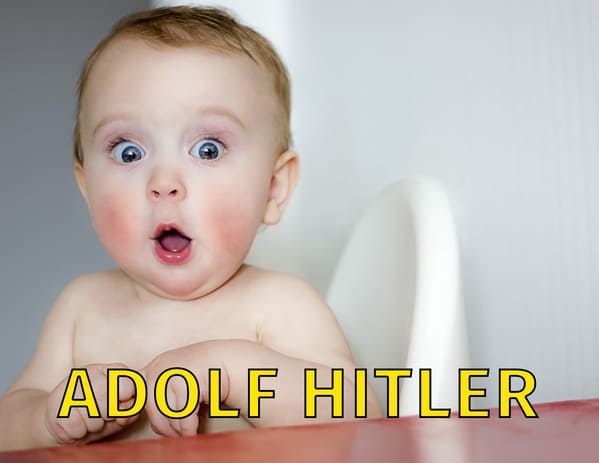 The parents then tried to claim they weren’t Nazis…. At first –ShamelessFox

My boyfriend was nearly called ‘Eggbert,’ but ‘Egg’ for short. So glad they decided against it! –Greenqueen420420

My dad wanted to name me ‘Sky’ — but he thought replacing the ‘y’ with an ‘i’ would be cute. Thank God my mom didn’t go along with it, or I may have been named ‘Ski.’ –Bingo-Bongo-Cat

Elon Musk and Grimes need to be stopped.

I worked at a registrar for a while, and some of the standout names on the birth certificates I got were ‘Killer,’ ‘Syphilis,’ and ‘Sweet Prayer Sunrise’ –Not-An-Ocelot

My ex-husband didn’t think it was fair that girls could be named ‘Grace’ or ‘Hope,’ and he seriously suggested ‘Pestilence,’ ‘War,’ or ‘Plague.’ And his choice for a girl was ‘Tangerine.’ Fortunately, we never had any children –Flaky_Walrus_668 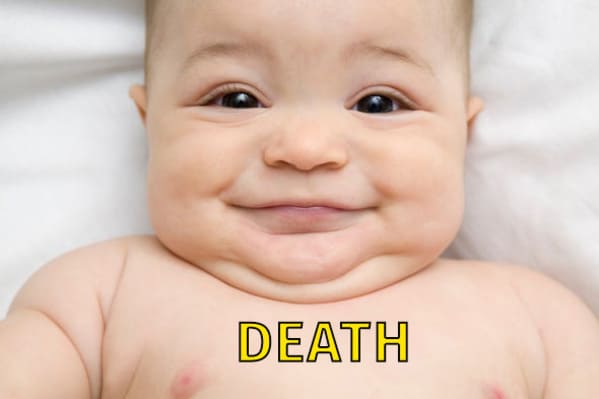 Oh I got one. Goth parents (18ish) had a baby. They wanted to name this sweet baby girl Death. I could not stand for it. So I told them every time I went to type it into birth certificate it changed the form to a death certificate. They bought and that girl is now named Morticia- SnooChocolates428

I lived with a student midwife when I was a student, and the first set of twins she delivered were named ‘Red’ and ‘Blue.’ –Flaky_Walrus_668

As a med student, I had a patient who wanted to name her child ‘Mudpiles.’ The nurses silently protested and waited a few days. Mom eventually changed her mind –bigpsych5150

I work in a music store that offers lessons and rents instruments. We have a list of the oddest child names.

~ Jamuary, Qwest, Sixte, She’Bra, Battle, ShyAnn are just a few on there.

~ The best one was Alivia (pronouned Ah-Lee-Vee-ah). When speaking with the grandmother she said that the mom wanted to name her Olivia but the father hated the name. Dad saw a bottle of Aleve on the counter so he and the mother compromised and came up with Alivia. –SweetLeafSC

Working as an ERT on overnights, I got called to OB to help out alot. One name will always stick with me because of how unfortunate it is for the kid and how ridiculous it all is. The mom was deep in meth and other substance abuse and she told us she wanted him named Zion. We were like oh cool no problem so we asked her to fill out the paperwork of everything for us to submit and put in the chart and she wrote down Vzyiion…..she looked us dead in the eyes and said, the V is silent….. She also gave him 5 middle names because she didn’t know which one was the father so he got em all. –Athuny

My uncle wanted to name his daughter Raider God. I’m glad they settled on Jada –keikei9 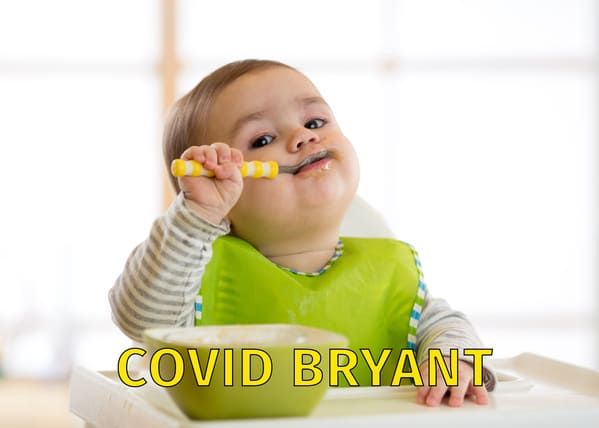 A baby here is named Covid Bryant… not even kidding. Look it up –mesiolabio

I tried to tell someone not to name their kid ‘Tarmac.’ They’d recently learned the word from NASCAR. –Chris_Thrush

My brother wanted to name our soon-to-be younger brother ‘Corn Peas,’ and our parents almost went with it because they felt bad for asking for his input and then rejecting it. Fortunately, they got over that. –BigOrangeBall

I used to work in labor and delivery. One of the very experienced nurses had two times she had to talk people out of naming their child Vagina… and explain why they were hearing that word they liked so much –KMoneySupreme

I’m neither of these, but I had a classmate in university whose name was Meganathan.

…To date I don’t know why Nathan failed to suffice. –DebugLifeChoseMe

My sister’s initials were almost PMS they swapped the first and middle names. –B3C4U5E

My mom wanted to name me Kirby. After her vacuum. Thankfully my dad talked her out if it. –Omfgimaweirdo 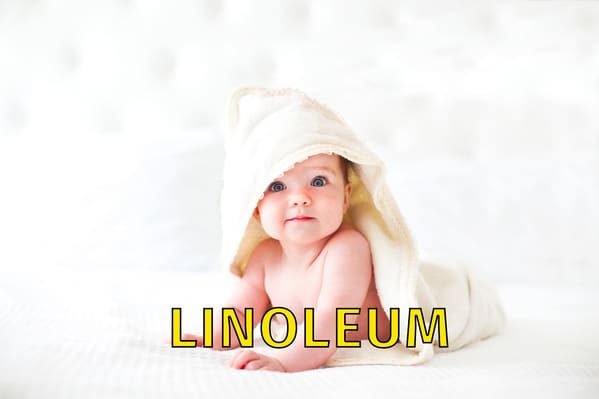 I once had a student named ‘Linoleum.’ Some midwife definitely dropped the ball on that one. –BigOrangeBall

She was certainly one of a kind-Artist-Upbeat

I know a teacher who has a elementary age student with a African name that unfortunately does not translate well into English North America, the kids name is Acock Ring, and yes I wish I was kidding. –The_Roptor

My daughter named my grandchildren…Draven Tyrion Dexter Zaraphil Johnson, and Andromeda Nymphadora Jane Zaraphil Johnson….I’m not happy , but at least we convinced her to leave Lucifer out. –OtterMosh

I currently work with someone who’s first name is “Imunique”. I don’t think any midwives or nurses were involved with the naming. –sungayray

I was almost named Cinderall I have no idea what my dad was smoking at the time. –313Lenox