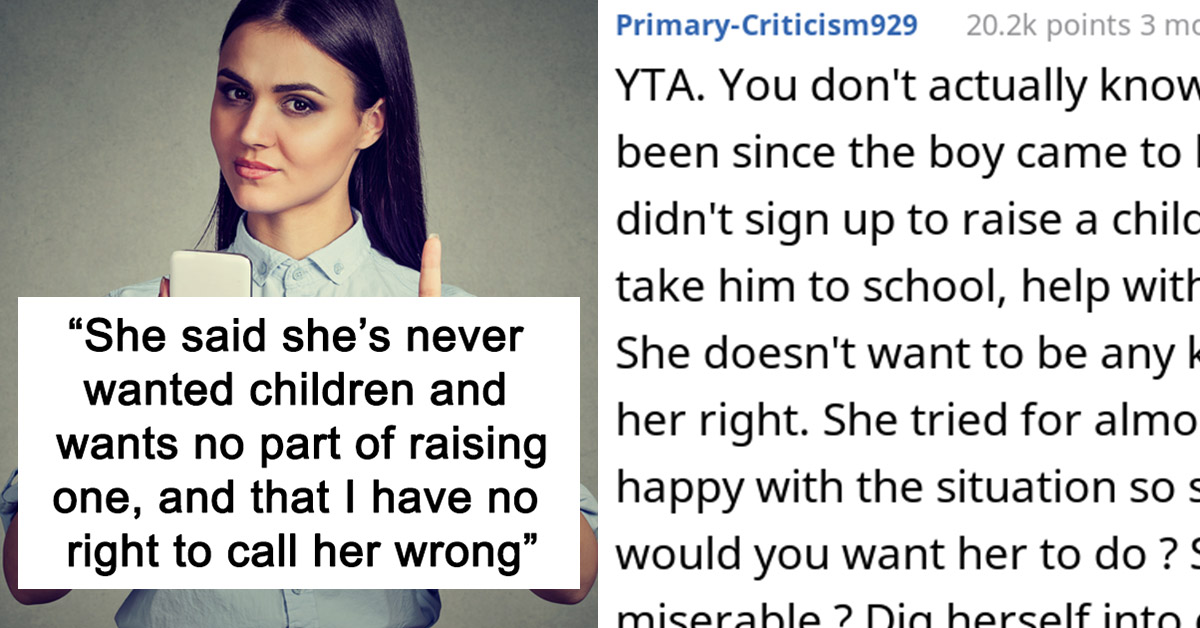 It’s not easy to be childfree in America; pretty much everything is set up to favor families, or at the very least, couples.

I mean, YOU try getting a mortgage on one income. And then there are the taxes child-free people pay that benefit literally everyone but them! It’s rough out there. So I have nothing but respect for people who know it’s not for them.

Her sister knew she did not want kids and then had to make a terrible choice to leave her husband when a secret child showed up. If that weren’t harrowing enough, the OP — well, I’ll let her tell it:

My sister is 30 and is married to a man who she, and our family, love. They’ve said they wanted to be “child free” since they met 4 years ago. They had a nice life, where they both worked, have a dog, nice house, etc.

Sister & husband have a great life. The family likes him. Everything is dandy.

About a year ago, he found out that he had a son. The mother was an acquaintance he slept with 6 years ago, who had never told him about him. She passed away, and her elderly mother has too many health issues for her to have custody. So he went to live with them.

Until the husband found out about a year ago that he had a son he never knew about. This poor guy. The poor KID; kid’s mom died and he had to go live with his dad.

He’s an amazing little kid, and our family has grown to love him too. So we were all shocked a month ago when my sister said her and him were going to separate – she said she loves her husband, but she can’t take being a stepmother anymore, and that everything from not being able to watch adult shows at all hours of the day to asking him to do his homework makes her miserable.

The kid seems generally great, but he’s still a child and OP’s sister started to feel the pressure of being a stepmother. She decided she needed to leave the relationship.

Her husband is absolutely devastated, as they have always had a happy marriage and still love each other – she’ll be the first one to say this. He didn’t want children either, but understands he’s the only parent this boy has now. I also found out that this little boy is taking the fact that she’s moving out and taking their dog (she was hers originally) very hard, no doubt due to the loss he’s already experienced, and I felt devastated by that.

The change has been awful for everyone; the sister is devastated, the husband is crushed, and the kid is taking the new change (on top of all the other changes he went through) very hard.

When we were at our parent’s house last weekend, I asked to talk to her and after some back and forth, I told my sister it seemed wrong and selfish to hurt not only her husband but also her step son this way, after not even a full year of trying to make it work.

And what may have been a “god, that’s just heartbreaking” now veers into “oh girl, no” territory. OP told her sister she was selfish for not being this kid’s stepmom.

She didn’t take that well and hasn’t spoken to me since. Essentially she said she’s never wanted children and wants no part of raising one, and that I have no right to call her wrong or selfish over that.

Obviously, the family is split and the sister was furious — so OP wants to know: did she f up?

My family seems to agree with me on this, but my mom is very upset that my sister is furious with me and the family members that agree with me. AITA?