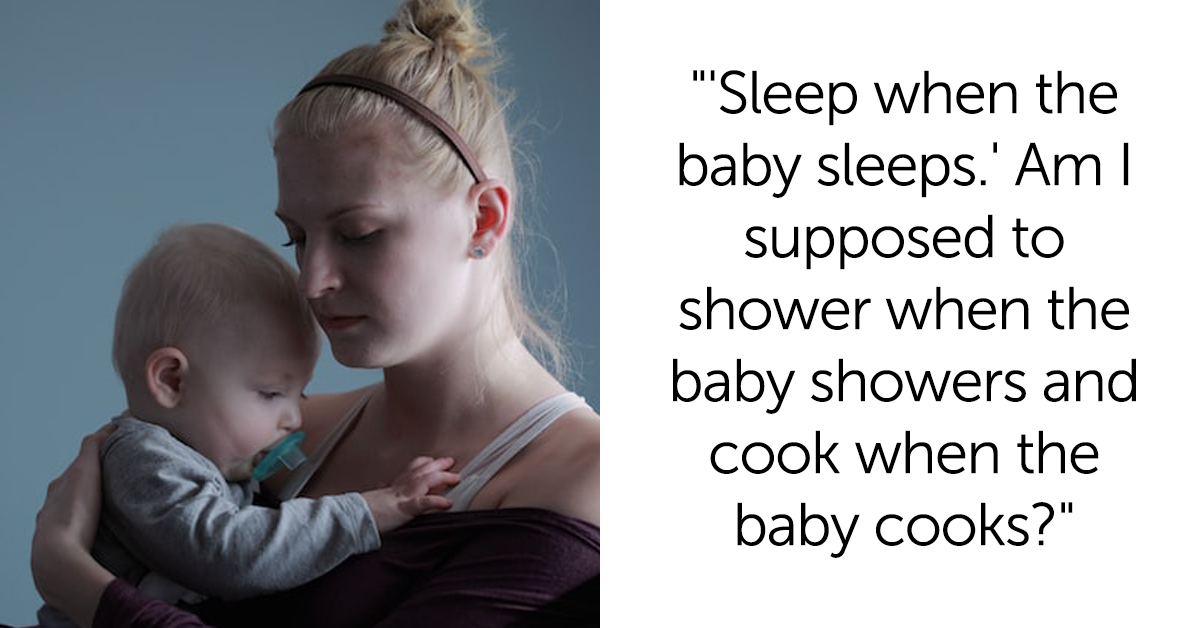 Kids are tough — really tough. They come with no real manual and everyone has an opinion about how you are raising your offspring, which seems remarkably unfair. So what’s a millennial to do with bad (or good) parenting advice?

The BuzzFeed Community was recently asked to share the best and worst parenting advice they’ve ever received and we rounded up some of the top replies.

“My sister-in-law had just given her 12-year-old a phone. She later regretted giving it to her at that age. Her advice when I was pregnant was to never do something unless you’re ready for that to be the new norm, because you can’t take some things back. It has been indispensable advice since having our son.”

“A total stranger told me while I was pregnant, ‘You better not vaccinate, or the baby will be autistic. Do your own research!’ I told her I read the AAP [American Academy of Pediatrics] recommendation on vaccines, and we will follow what scientists recommend.”

The best advice came from my mom: You might not feel that magic, all-encompassing love for your baby right away, and that’s okay. This is an entirely new person you’re meeting, and it takes time for those feelings to develop. Second best advice came from my grandma: If you need to put baby down for a minute, put them on the floor. Babies can’t roll off the floor and hurt themselves.”

“‘Breast is best!’ I breastfed my first for a year because I felt so much pressure to do it. I absolutely hated every second of it. It was so bad for my mental health. I was crazy depressed. I had a hard time bonding with my son because I felt like he only saw me as a food source, and my body was in so much pain. My nipples are absolutely ruined — one literally has a flap of skin hanging off still two years later because he bit me. Sometimes, the milk looked like strawberry milk from all the blood. With my second child, I ignored the pressure and bottle fed, and I am SO much happier and healthier.”

“My stepmother suggest that I move into a furnished apartment with my 3, 6, and 8-year-olds. I explained that wouldn’t work with the kids, and she told me it was time to teach them to be responsible. I tried to explain that isn’t how it works with toddlers.”

“I was worrying about how soon my daughter could pick up/turn her head back when she was an infant. My mom stopped and asked me one day, “Have you ever seen a kindergartener who can’t hold up their head, walk, talk, etc.?” That was a game-changer. I relaxed BIG TIME about when my daughter was hitting her milestones after that.”

“My child had debilitating anxiety about school that required professional treatment. During the height of our suffering, a friend told me she gets her kids to go to school by giving them a quarter. So, why don’t I try just giving him a quarter? Who knew…$10,000 on therapy and OT and countless meetings with school administrators, and all I needed to do was just give him a quarter!”

“Toddlers can’t act right if they don’t feel right. Address their feelings first, and then work on the behavior. It works wonders for helping with meltdowns and toddler stubbornness.”

“Anytime they say, ‘Well, back in my day…’ ‘babies slept on their stomach,’ ‘babies used bumpers in cribs,’ etc. And it’s worse when followed with ‘and you survived.’ Yes, but now, we have more research, and there were babies that didn’t. Follow the latest guidelines and advice from doctors. Science continues to advance the more we learn; that’s its purpose.”

“Be willing to change your expectations — it doesn’t mean that you failed! Have things that you value, but don’t get so bogged down by what you thought parenting would look like that you fail to enjoy the reality (even in those moments that the reality really, really sucks).”

“The one that immediately makes me livid is ‘Don’t pick your baby up every time she cries. You’re just teaching her how to manipulate you.’ Said about my 3-week-old. As if a newborn would be learning how to game the system. An infant communicates through crying. What do you expect me to do? Ignore her in a backroom until she learns to ask politely?? I will never not get riled up when older family members tsk and roll their eyes every time I respond immediately to my crying baby. They can just eff off. Or, telling me to just go lay her down at family events and that I shouldn’t be holding her all the time. I just like cuddling my babies! They’re only so tiny for such a short time before they start crawling and getting into everything. Just let me love them how I want to.”

“A former coworker told me that if my child was clean, fed, burped, and comfortable (proper clothes, no fever) but still inconsolable, that it was okay to put her in her crib/playpen and step outside to breathe if I was overwhelmed. She knew it was going to be mostly me home alone with my baby, and that sometimes, it can all be too much. Honestly, it was the most comforting advice I’d gotten regarding caring for my daughter, and made me feel like less of a jerk the couple times that I was at my wits end.”

“My mum told me many times, starting when my son was 6 weeks old, to ‘just let him cry, you’re being too soft.’ I let it slide for a while until she told me I would ‘ruin him.’ She knew my son has a serious brain condition and had his first brain surgery at 11 days old. I informed her AGAIN that his neurologist told us we weren’t allowed to let him cry for too long because the increased pressure could cause more pain, trigger a stroke, or worst case, kill him! Even if that wasn’t the case, I would not sleep train my child.”

“The worst advice has always been the whole ‘I got my ass beat all the time, and I turned out fine’ trope. I have never once spanked my son, and I get compliments on how amazing he is ALL the time.”

“My mother told me to stop giving my daughter options or letting her make decisions for herself; that I’m the parent and I have to make the decision, regardless of if it makes her upset. Sure, and in the process, I’ll alienate my kid, take away her capacity to make smart decisions on her own, and have her resent me as she grows up. I’ll get right on that. Respect is a two-way street, and if I expect her to show me respect, I should show her respect, too, even if she’s only 7, and allow her to decide if she wants to donate a toy or what she wants to eat.”

“Don’t force kids to eat. Instead of stressing about their intake in a meal, look at what they eat over a course of a week. They might only eat pasta one meal, but they’ll eat fruit and veggies in another. Our aunt tried to guilt-trip our child into finishing his second bowl of noodles, and he proceeded to throw up his entire meal. Also, don’t watch them eat during dinner and treat them like a guest. Imagine being a 2-year-old, and an entire table of people are trying to convince you broccoli tastes good.”

“That bed-sharing and the ‘Safe Sleep 7’ are safe. It’s entirely against the AAP standards for safe sleep. I learned after a bed-sharing advocate friend of mine lost her 2-month-old to the practice. Parents, it’s not worth the risk.”