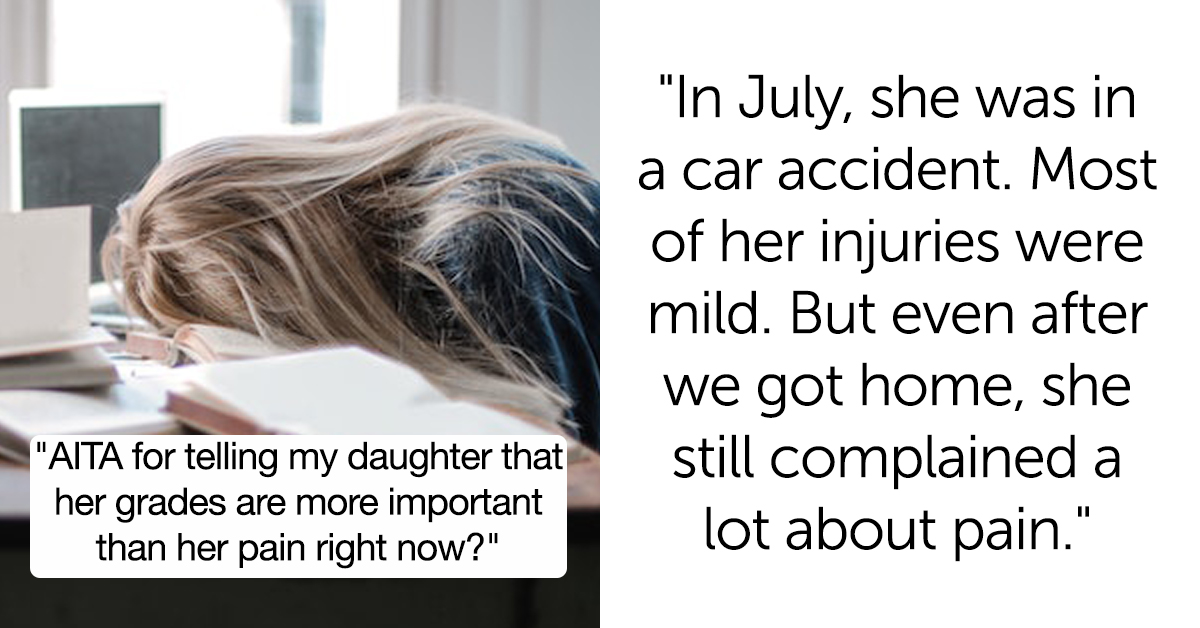 We all know that women’s trauma and pain is often overlooked or diminished. So what happens when it’s your parent who is minimizing pain?

One Redditor has a 16-year-old daughter who was in a car accident and ended up having to go to the hospital. Although she was released without any procedures, she still complains about pain. And she’s fallen behind on school work, often laying her head down in the classroom. All of this is really serious, but the OP is just mad about the fact that her daughter’s grades are suffering. And that, as Redditors were happy to point out, puts her in the wrong here.

“I (46f) have a 16 year old daughter. In July, she was in a car accident. Most of her injuries were mild. She went to the hospital but they let her go home after a few days of observation. But even after we got home, she still complained a lot about pain. I was concerned and took her to our GP but they couldn’t find anything wrong. I told her it was probably in her head and in response to the traumatic event and that she’d be fine in a few days. She stopped complaining about it after that and everything seemed good,” the OP writes.

“Fast forward to yesterday and I got an email from her teacher that’s she’s constantly despondent in class and laying her head down and not participating. I was already seeing red from that and I decided to check on her grades. She turned in multiple assignments late and lost points on them, which is not at all on par with her typical performance.”

“I confronted her about it and she was really quiet at first, like she didn’t know what to say. I pushed her on it and she started talking about pain again which I frankly think is bullsh*t. She hasn’t said a peep about it for two months, only when her grades are slipping. We started arguing about it and I said that her grades matter more than her ‘pain.’ She’s a junior this year, it is not the time to be slacking. She’s been in her room since, refusing to talk to anyone. She wouldn’t even go to school today. I’m at a loss, she’s never been so difficult. And I’m questioning whether or not I’m in the right here.”

Someone please tell this mother about trauma and women’s pain being ignored so regularly and with devastating consequence. And that grades are not everything even on a good day.

“You assumed because she shut up about her pain, because you told her to, that it no longer exists. And you’re using her silence on it as proof, while ignoring that you told her to stop talking about it. Yeah. YTA. Whether this pain is physical or psychological, it’s still incredibly real pain. She needs help, not an asshole parent telling her to shut up and then throwing her silence back in her face. Do better,” advised

“I was left disabled after a car accident, but I was out of the ER in a couple HOURS. She was in for a COUPLE DAYS?! How does OP not realize how serious that is? OP, why did you dismiss and ignore her pain? Why didn’t her GP refer her to a pain specialist and neurologist? Why didn’t you advocate for her? Fight for her? Women/girls are not treated as equals in the medical field. She needed you to believe her, and you told her it was in her head. Could you be any more dismissive and condescending? Do you know how many doctors said that to me? I was later told that my soft tissue damage would take longer to heal than if I’d ‘simply’ broken my back. I already know your daughter has been in pain since the accident, but she didn’t feel safe in telling you. What proof do I have? HER GRADES AREN’T NORMAL FOR HER. What a coincidence. Chronic pain leeches the joy from your soul. Being happy and lively take energy, and your daughters’ is all going into trying to survive each day. She feels isolated, and has no hope that help will come. Depression sets in with the realization that her entire future looks different through the lense of chronic pain. What hope could she have when she can’t even depend on mom to believe her? A LOT OF PEOPLE DON’T SURVIVE THEIR CHRONIC PAIN, OP. I don’t know where I’d be if my mom didn’t do everything you’re failing to. She knew I wasn’t okay, and she fought for me. She didn’t stop. What will you lose by listening to your daughter, and giving her the love and support she so desperately needs? Think of what you stand to lose if you don’t,” said

“YTA – And a horrible mother. Newsflash, she stayed quiet about her pain for two months because you invalidated her by saying it’s ‘all in her head.’ She no longer felt safe telling HER MOTHER that she was in DEBILITATING PAIN. YOU DID THAT. And when you found out she had still been in pain for two months? You proved her fear absolutely correct by being angry at her. FOR BEING IN PAIN! You say that this isn’t in line with her past behavior, so logic would dictate that something is wrong. Stop blaming your daughter for being in pain! Sometimes a GP doesn’t find the problem. That doesn’t mean there isn’t one. Do you know what a good mom would do? She would take her daughter to any doctor she could to find out what was causing her child pain. She wouldn’t tell her daughter to just suck it up and deal with pain. A good mom tries to help her child, especially when that child is in pain. You failed your daughter two months ago. You’re failing her now. Do better. Apologize to her. HELP HER. Her well-being is way more important than insignificant grades. I mean, really. Would you rather have a living daughter with a lapse in grades due  I mean, really. Would you rather have a living daughter with a lapse in grades due to a medical issue, or a dead daughter with straight A’s on her final report card,” asked

“YTA. Your daughter could easily have post-concussion symptoms or other issues. Or PTSD. In any case, the world already has a full complement of people who minimize medical issues for women. You’re not needed for that. Support your child,” said

“YTA holy sh*t. Your daughter stopped talking about her pain to you because you do nothing but make her worse, by invalidating her and blaming her. She turned in assignments late, she didn’t just decide to skip school all of a sudden. She’s clearly trying her best but is absolutely exhausted because pain is exhausting, trying to figure out what’s wrong with you is exhausting, being disbelieved by people who are supposed to be in your corner is exhausting, hiding your pain from a**holes is exhausting, and being a teenager is already exhausting enough normally!! You asked her why she was slipping in school, she answered you honestly, and you punished her for it. Try believing your daughter. And keep trying more doctors, until you get to the bottom of the pain! If you keep on this route, she’ll probably start self-medicating before she’s 18. Either to try and cope with the pain, or the emotional turmoil you’re putting her through, or something to keep her up during classes. You and her pain have teamed up to push her towards the edge of a cliff, but she hasn’t fallen off yet, she’s still trying. Work with her, support her, listen to her, so she doesn’t fall,” warned

Thankfully, the OP says she has learned from the comments and will do better.

“I get it, I’m an awful person. I wasn’t seeing past the grades and I treated my daughter horribly. Thank you especially to the medical professionals who replied, I had no idea this could be so serious. I’ve already booked a specialist for two weeks from now (earliest appointment) and apologized to my daughter. I know I still have a lot of making up to do. We’re going out for ice cream.”

Let’s hope ice cream is only the beginning of what needs to be a very long apology parade.