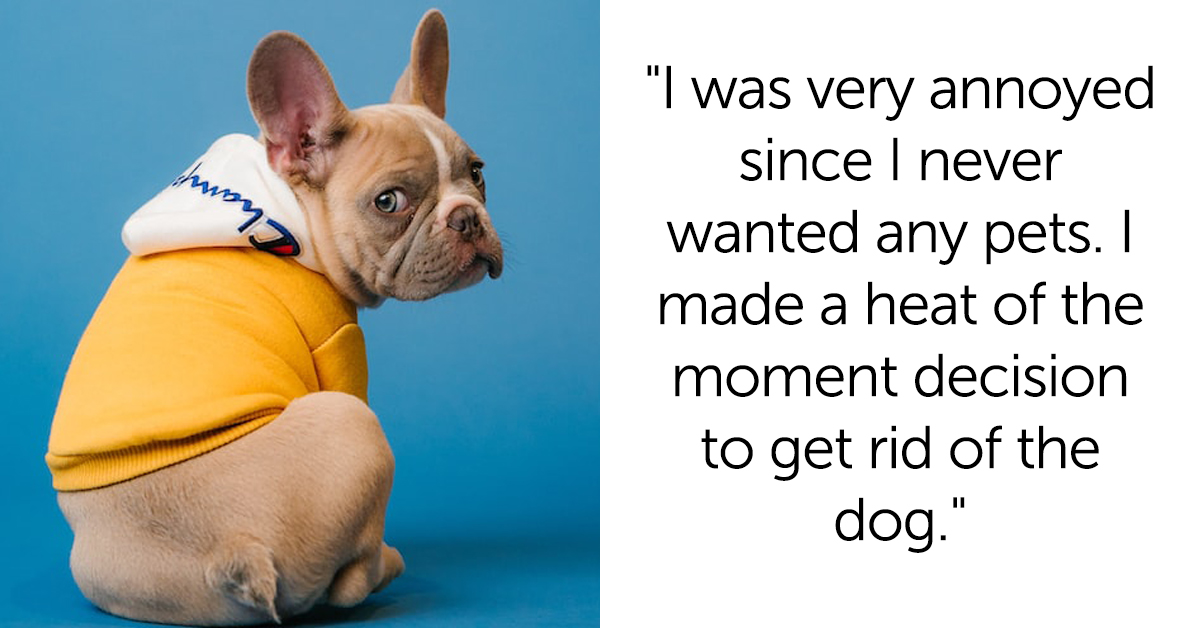 I can’t fathom ever getting rid of a family pet — unless there’s some serious extenuating circumstance, like illness or death. I love my pets with all my heart; they’re here and they’re mine and even if I had a kid who was SUPPOSED to take care of a dog or cat, I’d pick up that slack.

Not quite so in u/ffrozen_yogurtt‘s house.

She recently posted a question to AITA on Reddit wondering if she was wrong for getting rid of her daughter’s dog. God, I can’t. Here’s the story.

Her daughter recently turned 16 and begged for a dog; OP relented and got her the pet.

I don’t mind pets but I never really wanted any in my house. My daughter has always begged to get a dog or a cat and up until this point I have said no.

This time I really thought about it. She is a good kid and I figured since she was turning 16 she was mature enough to take care of it.

OP was very clear about the rules of having the dog; her daughter was in charge of feeding, walking, and taking it outside.

What OP figured would happen after her daughter graduated from high school and left home is beyond me, but okay.

I agreed to get her a dog but I made plenty of rules. The main rule being that she was the one who would take care of the dog. Feeding, walking and taking it outside.

She was very happy about this and we went to a local shelter. We ended up adopting a small mixed breed dog who is quite friendly and overall well behaved.

They adopted a very sweet, well behaved dog and the entire family, including OP’s son, got attached.

We all grew very attached to the dog, I have a 10 year old son as well and he instantly fell in love with him.

Everything was going well for a month. Eventually the dog started peeing & pooping in the house. I would text my daughter about this asking if she took him outside and she would say she forgot.

OP’s daughter did what 16-year-olds do: she forgot her responsibility. OP picked up the slack, but it seems that not much got better.

Since she was at school I was the one who had to clean up the poo. This happened maybe 4 times. Each time I lectured my daughter about taking care of her dog. I made a point to emphasize that it was HER dog and she was responsible for him.

There were also quite a few times where my daughter texted me from school saying she forgot to feed the dog and asking me to.

This week, the daughter shut the dog in her room by mistake. OP let the dog out, but told her daughter that this wasn’t acceptable — fair.

On Friday she went to school as usual. I walked past her room at some point and the door was closed, I heard the dog barking from inside the room. I let him out and texted her what happened.

Here’s where OP absolutely loses me: she rashly decided to rehome the dog.

I was very annoyed since I never wanted any pets. I made a heat of the moment decision to get rid of the dog. I called my sister, who lives 10 minutes away and loves dogs. I asked her if she would take the dog and I also said it may be temporary if my daughter can prove that she’s ready to actually care for him.

She told her kids and everyone’s upset. So who is wrong?

My sister happily agreed and I brought him to her house before work. Of course I intend to take my kids to visit the dog, but I am done taking care of him when it’s supposed to be my daughter. I also feel the dog will be better cared for at my sisters house.

I explained this to the kids who were extremely upset with me. Both of my kids started crying and my daughter stormed off to her room. All weekend she has been extra mouthy to me and my son has been moping around.

I feel bad for my son who is very close to the dog and didn’t do anything to deserve him being taken away. I do feel bad for my daughter as well but she broke our agreement. Am I the ass hole?

Others voted YTA, writing, “Just seems like an odd decision to bring a dog in the house with a firm stipulation that a single member of the family be the only one to take care of it.”

Someone else said, “You never get pets for kids, you get them because you want them. At least your sister loves the dog, but you should not have gotten one unless you were willing to care for it!”