Being a mom is tough, because raising kids is tough, and also because no matter what decision you make from the second you conceive, it seems like someone is judging you.

A woman named Jen Flint wrote a post on Facebook that seems to have touched on one of the most hot-button judgment issues of the era: the ways moms present their children on social media.

She says she saw a “young Mama and her little daughter ” come into the pool area wearing coordinated outfits and carrying matching towels.

The mom spread out toys and sunscreen in a display, and set up a  camera and tripod, then proceeded to pose her daughter in front of their aqua equipment, in front of the pool, then in it, then coming out of it. The scene was clearly a planned photoshoot, to Flint.

Little one smiled big and said “cheese” like she’d done it a million times. Then Mama told her she could play. Little One walked in and swam around for a couple of minutes. Mama called a friend on her phone and began another conversation while Little One politely and repeatedly asked “Mama, can you come in the water with me, please?” She was ignored. “Mama, come play with me?” she asked 4 more times. Mama glanced over at her but never got off the phone. After 10 minutes Mama ended her call, collected the sunscreen that was never applied, the water toys that never touched the water, and then her daughter and left the pool.

I sat there thinking about what I’d witnessed for awhile afterwards. I imagined the photos she took being perfectly edited and posted to social media with a caption like “Pool time with my girly! #Makingmemories“.

She says she was imagining other moms at home who were taking care of their kids, getting exhausted, feeling frumpy, looking around at their less than perfect lives and seeing these sorts of pictures on her own phone:

Flint just wants moms to know that social media makes demands of mothers that are quite unfair, because it presents only the absolute best moments, and hides the mess:

What we see on Social Media isn’t always real. Sometimes and often it’s a complete set-up. It’s staged and filtered and it’s counterfeit.

Sometimes we do see absolutely real photos of vacations and beautiful homes and freshly done hair but it’s only ONE moment. It’s the very best moment out of a whole day spent much like our own. Working, cleaning, and messes…

Mamas, don’t compare yourself. You ARE enough! You are amazing and the very best part is that you are REAL! Your dirty shirt and your messy house and your happy children are real and they are proof that you are doing it right!

The responses were intense and varied. There were a lot of people who actually did take solace from Flint’s point about expectations versus reality. It is easy to get down on yourself when you are only seeing screenshots of other people’s lives, and they’re only presenting the best fractions of those lives for public consumption.

Other people felt Flint was mom-shaming a woman who was having a random day, and she had no idea what was going on. Any mom could look neglectful or bad in the wrong context. It’s okay to be on your phone sometimes! 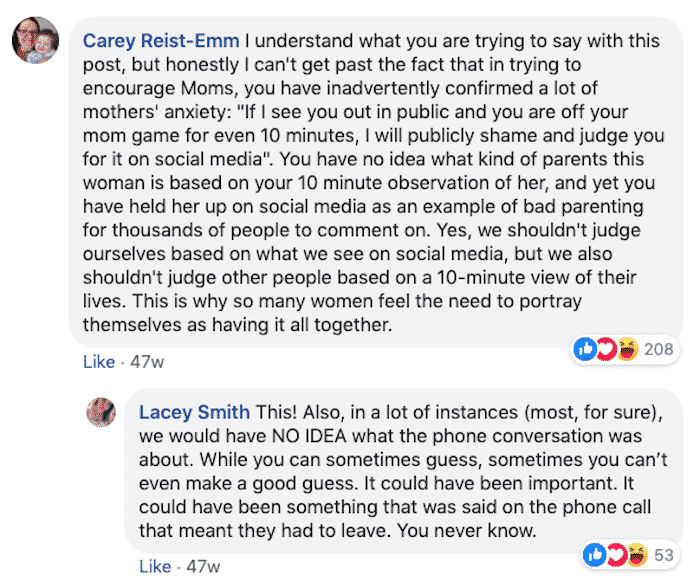 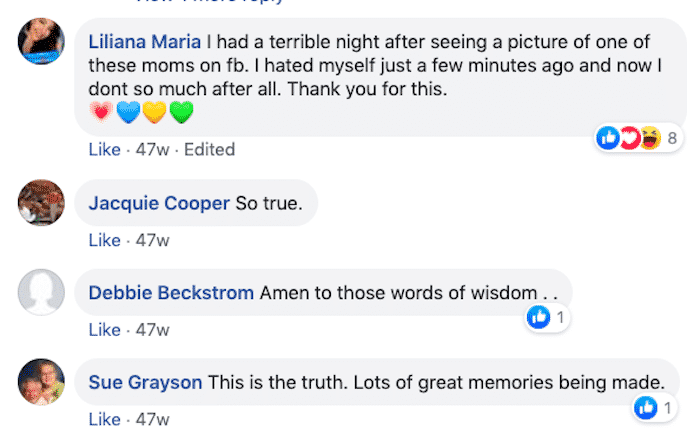 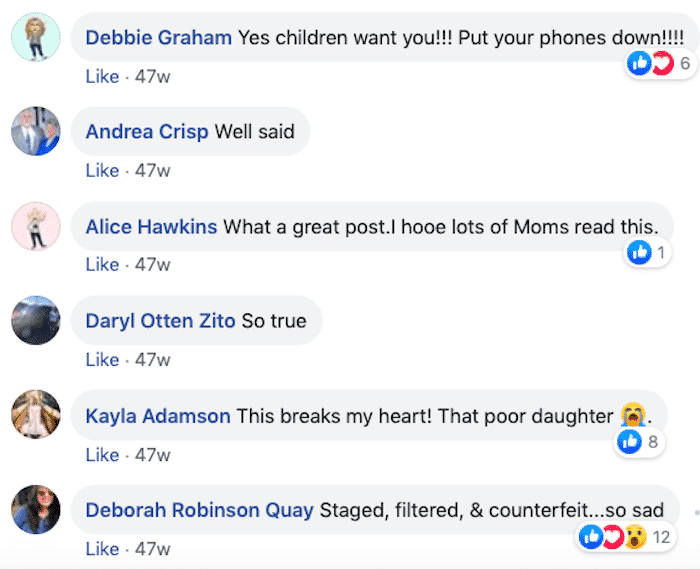 People in the comments were arguing so much that Flint had to follow the viral post up with yet another message containing a bunch of addendums:

While I do feel like our children deserve our attention and we all do need to put our phones down and really be present with our family and friends, that was not the message I was sharing.

I, in no way, meant to shame or judge this pool Mama for her actions. I don’t know why she behaved the way she did and honestly I don’t care. I’m sure she had her reasons. We all do. She is just a Mama doing her best too. Shaming her was also not what my post was about. I was not pointing fingers. I was not insinuating that I was better than her. I was not pinning stay-at-home moms against working moms. I was not shaming anyone for taking photos of themselves or their children. C’mon y’all, preserving memories is often just as important as making them, right?! I was not shaming people for reading a book at the park while their little ones play on the swings. Please don’t hate on others for doing things differently. Don’t judge the mom at the pool who couldn’t get in the water with her kids that day so she played Candy Crush on the sidelines (Hello! That was ME!!)

The sole intent of my post and what I hope you take away from it is this… The beautiful, perfect, filtered photos that pass by our eyes as we scroll on social media are not a full depiction of real life. They are staged (either for someone else’s self worth or because a company is paying for those staged photos to entice you to buy whatever it is they are selling). They may also just be a beautiful photo of a child laughing, a momma having a good hair day, an exquisite meal or a tropical paradise, but they are just a glimpse of a perfect MOMENT. Is there harm in taking photographs of those moments and sharing them? No! Y’all know that I do it too!

Flint says she just wants people to remember that “comparison is the thief of joy.”